Greening the desert and Moroccan-Hungarian model of progressive climate protection

According to GLOBS Magazine, while the heat is still unbearable in Hungary, the forests are on fire in Sweden as well. We feel that climate change is no longer just waiting in our “lobby”, but it is in our apartment. Meanwhile, there is a lack of a worldwide collaboration based on actions. According to a comprehensive example, what we have done so far in the world is like annoying an elephant with a straw. Although alarming studies were published recently, deforestation continues, our lakes are drying out, desertification is still a problem (even in Hungary), the African migratory pressure is increasing in the European Union and people die of heat waves and the related strokes.

This increasingly worsening situation is getting more and more serious. A childhood dream of mine inspired me to work out a complex and progressive answer which is not only an effective solution for the aforementioned problem but also partly or completely solves it and also gives new impulse to the development of the world economy. This plan is no less than greening the Sahara. My fellow scholar colleagues call it the Green Sahara Project or simply the GSP.

The essence of the GSP is that, we are building a triangular shape with 25.000-acre-large green squares (called quadrats). The project would start at the coast of the Atlantic Ocean heading towards the middle of the desert, in the direction of the Lake Chad. 50.000 workers are needed per square. This number grows to 250.000 with the inclusion of the families. Thanks to a new Hungarian innovation, seven million trees to be planted per square will capture about 25 million tons of carbon dioxide!

This figure is half of Hungary’s annual total CO2 emission. Artificial rains generated with nuclear heat, dual-function wind turbines or the vortex towers may sound like a utopian endeavour in which we transform the 27 different economic and ecological options provided by our trees into prosperity.

The seemingly Verne-like vision is in fact based on reality. The target area of the squares is only one-third of Western Sahara, starting from the Atlantic coast to Lake Chad. Of course, it is a vast territory with the size of three million square kilometres.

In order to understand the GSP, let us start by saying that the Sahara used to be green with dense vegetation and large herbivores. The concentration of carbon dioxide used to be much higher in the atmosphere, compared to today’s level. At the same time, the destroyed tropical jungles and Earth’s vanished giant lakes prevented extreme weather conditions from appearing, in addition to many other benefits. Today, the Sahara is a sand and stone desert and the Aral and Chad lakes are disappearing. Our jungles are dying or being transformed into a monocultural plantations. We even cut off the free fertilizer, the CO2, from the vegetation. Creating the “puzzles” required for the success of the GSP did not go easy. The project had to be put together with the help of the forces of nature and not against them.

Ten years ago, I started experimenting with a special plant in Hungary. It was a Paulownia hybrid. Thanks to the highly efficient (C4) photosynthesis, the plant can capture ten times more carbon dioxide (CO2), compared to the temperate zone. In Morocco, however, our trees work even better, because the favorable conditions make it work more efficient. While forests in the temperate zone can capture 13.5 tons of CO2 per acre annually, our hybrid starts with 100 tons even in a limited vegetation period. In Morocco, we nearly achieved 500 tons. It was possible in 360-day-long vegetation period with an average temperature around 20 degrees Celsius. Thanks to a Hungarian solution, water consumption has dropped by half. 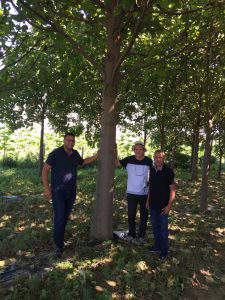 As the Country Director of Hungarian Trade and Cultural Center (HTCC), I have been doing my research in Morocco since 2015. Here, I also deal with business development for Hungary and Morocco. Then, a big idea came to my mind. During the World Climate Expo in Marrakech, I have introduced the results of my experiments, in addition to the carbon dioxide irrigation in the open air, which has received an innovation award in 2016. Therefore, we have our miraculous hybrid for the international success, the accelerating and life-giving CO2 technology and the Hungarian solution that ensures lower water consumption. Furthermore, the artificial rain model by nuclear and laser physicists is under development.

After two forums in Budapest, all this will be introduced in Morocco at the 3rd Summit of the Sahara Scholars (3S). The event will take place in Dakhla, at the gates of the desert, on September 27-28, 2018. We hope that the event will be under royal patronage. A team of Hungarian, Polish, Vietnamese, Indian, Canadian, Spanish, Portuguese, Moroccan, and Beninese scientists and specialists are ready to face the challenge, which is the realization of the first element of the GSP that will cost 620 million US dollars.

Source: The author of the article and the leader of the project is Prof. Dr. József Steiner, Country Director of the HTCC Business Network in Morocco