The renewal and modernization of one of Budapest’s most important and busiest squares have been on the agenda of the capital for over 3 years now. Finally, works have begun on Monday.

A while ago, a question arose about the Hungarian capital: is Budapest traffic worse than ever? Of course, it depends on people’s personal opinions and concrete areas of the city. Nevertheless, someone always mentions Blaha Lujza Square when talking about the most problematic spots of Budapest.

Budapest Mayor Gergely Karácsony held a press conference in the square on Monday, when works started. He highlighted that this reconstruction has been a long-awaited and wanted job in the capital since the square is one of Budapest’s busiest public areas, still, it was the “shame” of the capital during the past decades.

The renovation will take time. If everything goes according to the plans,

Until then, there is a lot to do, says szeretlekmagyarorszag.hu

The first phase will last around 10-12 weeks, until the middle of September, during which period we need to prepare for significant traffic limitations around the square.

When creating the traffic plan for this period, the capital discussed the issue with the Hungarian Car Club to find the best solution.

Most of the traffic jams will be caused by the surface insulation of the underpass, which results in the

closing-down of one lane on Rákóczi út and one lane on Nagykörút (József Boulevard), in both directions.

On Rákóczi út, 2×2 lanes will remain for the cars, while buses will be controlled by the traffic lights and by giving them the way. Bicycle lanes, naturally, need to be closed on these sections.

trams will suffer no modifications,

since the necessary reconstruction works under the tramways are already done.

During these next 10-12 weeks, while traffic will be limited at the square, some of the earlier limitations made in the VIIth district will be lifted. Thanks to this decision, both

the whole of Dohány street and Wesselényi street will be open, between Károly Körút and Nagykörút.

24.hu was curious about how the first day of the renovation was carried out, so they went to the scene and asked bystanders about their opinion on the organisation of the works.

“It is already a disaster.”

“Trying to cross here by car is impossible. The city already lost, ever since the bike lanes were opened, but this way, it will be a nightmare.”

“They should have already done it, we had one and a half years, I believe, during the Covid.

We did not touch anything. Not that summer is here, and people are moving around, now we started to take care of this”, says an unsatisfied taxi driver.

Some cars did not take into consideration the closed lanes and entered anyway, for which construction workers needed to cordon off those lanes.

On the bright side, the original plans were reconsidered, and the city will plant more trees than they had planned, to make the area greener.

The road junction will be accessible for those with reduced mobility, and public toilets will be available.

Moreover, they will create the possibility of connecting the tram line of Népszínház utca.

In order to do so, unfortunately, the use of the square and its traffic needs to be reduced until the end of the works. 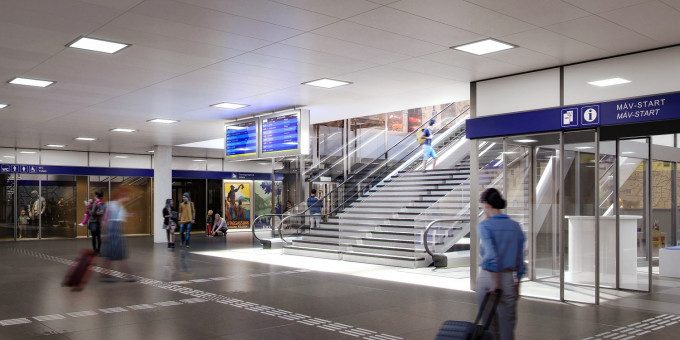