According to hvg.hu, an irrigation technical company would cover roof structures with vapour to prevent them from overheating. The torturous heat doesn’t only exhaust workers, but it is also the reason why establishments’ summer electricity use exceeds their winter expenses.

The workers of a Hungarian factory producing car safety gadgets started fainting in a row in the summer sultriness two years ago. 30 people felt dizzy on the first day, 28 the next day and 13 workers even had to be taken to the hospital. The case is not unique at all: the flat-roofed halls of factories working with electric appliances and heat-producing technologies overheat in the summer so much that workers can’t stand the heat anymore and they faint. The implementing of air-conditioning seems like an obvious solution, however, it uses a lot of energy, and the appliances placed on the rooftop simply stop working due to the extreme heat above the roof. 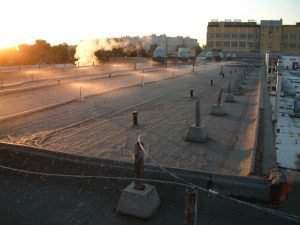 A Hungarian company marketing agricultural irrigation systems found a sustainable solution to the problem, with the help of which workers could be saved, and the drastic energy-use could be decreased. They don’t simply water the roof like lands, but worked out a so called evaporative system, which evaporates the needed amount of water with the help of a self-adjusting system. This way a “water film layer” is generated – this is how the technology, WaterFilm Technology, got its name – which doesn’t only abstract the Sun’s energy, but also helps the heat generated inside the factory exit.

The company made a video that demonstrates the process. Unfortunately, it is in Hungarian, but the drawings are quite self-explanatory.

They developed the technology for a competition focused on energy efficiency, although this technique has been used in Opel’s Szentgotthárd factory since 2008. According to István Weeber, the owner of the technology, in the beginning the system only operated in 80% of the hall, but they later expanded the system to all areas, even if there weren’t production processes. The reason behind this was that the non-cooled roofs can heat up to 65-70° Celsius in summer and cool down to 10° at night, which leads to such an expansion-shrinkage that causes flat-roofs to leak. Still, thanks to the irrigation system, this heat fluctuation decreases, which also betters the chances of deterioration.

The water used for the cooling is always “grey”, in other words industrial water, which is accessible in the case of most industrial establishments. “Naturally, drinking water would’ve been convenient as well, but we wanted to avoid this due to principled reasons, as the aim of the technology is the performance of sustainable operation” said the head of Öntözés.hu Kft. 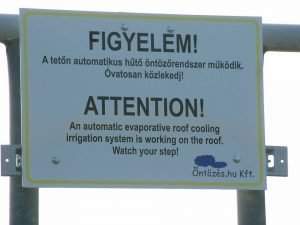 Even though the technology doesn’t replace air-conditioning, the electricity uptake of appliances decreases by 60-80%, since they cool the temperature of the halls from 45-55° Celsius to 28-38° Celsius. So you need less appliances, and their lifespan and operational safety become greater. The plantation of the WaterFilm Technology in a 10 thousand m2 hall costs 50-60 million forints, which is much less than the cost of a system solely based on air-conditioning (400 million) even if the orderer chooses the evaporative system (200-250 million). WaterFilm’s energy necessity and maintenance costs are 5-10% of the air-conditioning system’s and one third of the another evaporative system’s (adiabatic system).

The company needs a few more model projects to get the necessary authority documentations. Still, they are full with hope: according to their knowledge, their technology is the only one that lives up to the EU goal concerning the energy efficiency of establishments. They also hope for a change of law. The Hungarian parliament has passed the bill for a tax discount for energy efficient investments. So, hopefully, the majority of flat-roofed halls will be covered in vapour in a few years’ time.