Foreign Affairs Ministry of Hungary Hungarian government Hungary Russia
Due to vaccine purchases and the long-term gas supply agreement, “it is not an exaggeration to say that 2021 was the most successful year” in Hungarian-Russian relations, Péter Szijjártó, Hungary’s minister of foreign affairs and trade, wrote on Facebook after meeting his Russian counterpart Sergei Lavrov in Stockholm on Thursday.
Szijjártó said he and his Russian counterpart reviewed the main areas of bilateral cooperation and agreed on a five-point plan of action for next year.
Priority goals include starting the construction of the new blocks of the Paks nuclear power plant, launching the production of Sputnik vaccines in Hungary, increasing the number of freight trains entering Hungary at Zahony and operated by a joint venture to be established on December 16,

and boosting Hungarian agriculture sales to Russia, Szijjártó said.
Minister: Hungary will remain in the EU with heads held high!
Close cooperation between East and West could enhance the success of the international community’s actions in the areas of health and security, Foreign Minister Péter Szijjártó said in Stockholm on Thursday.
The ministry said Szijjártó told a ministerial meeting of the Organization for Security and Co-operation in Europe (OSCE) that there were significant global challenges in the areas of health and security. The new variants of coronavirus posed considerably more serious health threats than previous variants, he said. Additionally,

migration waves are intensifying, partly as a result of the failure of the Afghanistan mission and partly due to other conflicts,

he added.
“The spread of the pandemic and migratory trends can only be stopped if we can build strong-East-West cooperation,” he said. Commenting on new virus variants, Szijjártó said there was a global race for time. At the same time, there are successful, high-quality scientific-medical communities in the East as well as the West that could be even more effective in the fight against the pandemic if they were working together, he said.

“More people could be saved if political and ideological considerations were removed from the horizon,”

he said. The same applies to migration, especially in the current situation when developments in Afghanistan have created a real danger of further mass migration waves towards Europe, he added. It would be important to develop cooperation with central Asian countries to protect their borders and halt migration from Afghanistan, he said. 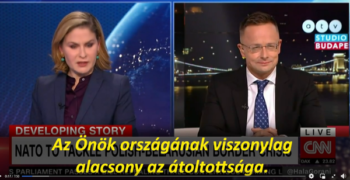