Szijjártó told MTI by phone on Friday that next to the Islamic State terrorist organisation the largest global threat is currently posed by the North Korean dictator’s plans to develop nuclear weapons.

“North Korea is headed by a mad communist dictator who poses a threat to the whole world” because he is making every effort to develop nuclear weapons. Just this year, 24 rocket experiments were carried out in the country, he said.

Hungary is determined to have the international community prevent North Korea from developing nuclear weapons and proposes that the EU should introduce new sanctions in addition to existing ones promoted by the UN, Szijjártó said. In line with the Hungarian proposal, further sectors should be affected by an EU investment ban and European companies should be prohibited from investing in metallurgy and aircraft manufacturing. Additionally, European companies should be banned from offering services in information technology, mining and chemical industry, plus all North Korean politicians should be affected by a travel ban and their assets should be frozen. Hungary will also propose further restrictions on coal exports from North Korea because it represents one-third of the country’s foreign currency revenue, Szijjártó said. 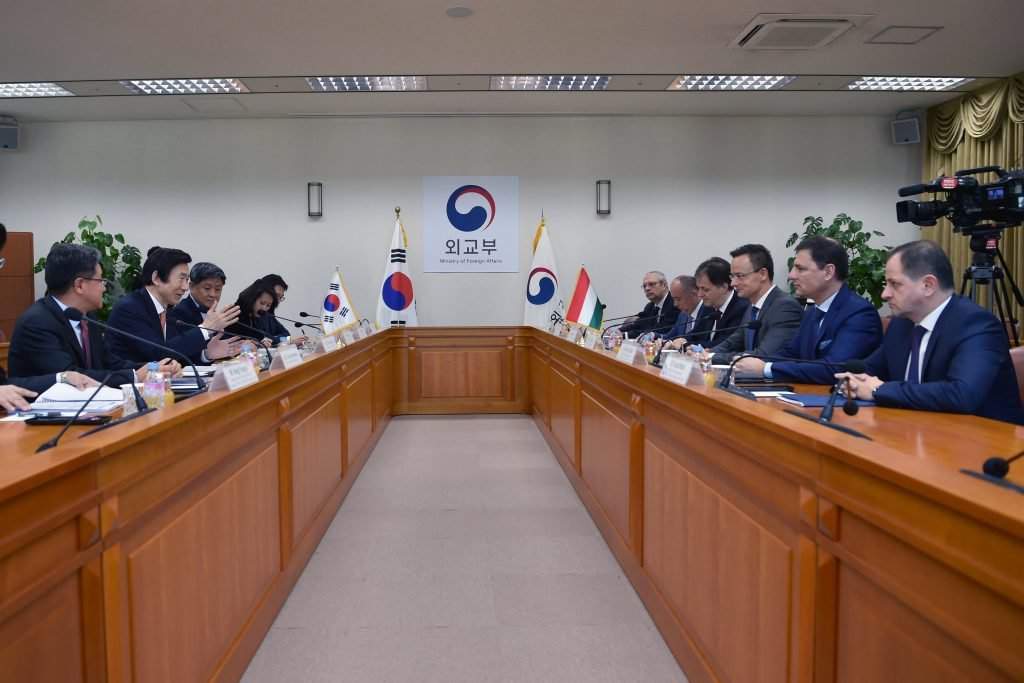 These measures could prevent North Korea from access to financial resources and foreign currency needed to develop nuclear weapons within a relatively short time. It has become clear that “resolutions and all kinds of nice words” are insufficient to prevent this, so hard sanctions are needed that are stricter and more comprehensive than those already approved by the UN, he added.

He met his counterpart and the leaders of several large companies in Seoul. He said “the car industry represents the backbone of Hungarian industry” and it has arrived at a watershed because from now on, digitalisation and electromobility will play crucial roles in the world’s car industry. It is therefore important whether companies that plan a leading role in this period will select Hungary for investments or not, he said.

Szijjártó noted that Samsung SDI had decided to manufacture electric car batteries in Hungary and create 600 jobs after an investment of 90 billion forints (EUR 286.9m) in God near Budapest. It was also agreed that two additional companies, to serve as suppliers for Samsung SDI, will also set up production in Hungary. Companies belonging to the Samsung group will increase their Hungarian capacities, which will also create 500 jobs. Szijjártó said this is proof that Hungary will remain a European hub for the car industry in the new era.

Both countries want to boost technology cooperation, investment links and trading. Eximbank has set up a 720 million dollar credit line because South Korean companies are clearly increasingly interested in the Hungarian economy. Even if one South Korean company makes an investment, it attracts interest from the entire business sector, he added.

This year, some 125,000 tourists arrived from South Korea to Hungary, representing a 13 percent increase, so Szijjártó said he had held talks with two airline companies about the launch of direct air links between the two countries. This summer, Asiana Airlines operated a direct flight between Seoul and Budapest and chances are good that this service will resume next summer, he added.

He said talks were also held about launching research and development projects in the defence industry and developing closer ties between the Korea National Defense University and Hungary’s National University of Public Service. From next September, Korean students will participate in training sessions by the Hungarian army general staff.

Szijjártó said a decision has been made to set up a Hungarian cultural institute in Seoul and a cultural attache in charge of the project has already arrived at the Hungarian embassy there.

Budapest economy European Union Fidesz Government History Hungary migration Ministry of Foreign Affairs tourism Viktor Orbán
The three Hungarian citizens who have flown home after staying on a Dutch cruise ship…
One of the flights of Ryanair was scheduled to take passengers to Gran Canari,…

Prime Minister Viktor Orbán called for a debate within the European People's Party on…
We and our partners use technologies, such as cookies, and collect browsing data to give you the best online experience and to personalise the content and advertising shown to you. I accept
Privacy & Cookies Policy