Hungarian foreign minister talks with his counterpart in Budapest

Budapest, February 2 (MTI) – Hungary and Croatia’s interests lie not in prolonging disputes but rather in re-forging friendship and strategic cooperation, Foreign Minister Péter Szijjártó said after talks with his Croatian counterpart in Budapest on Tuesday. 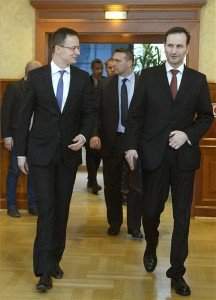 Szijjártó said Hungarian-Croatian relations are currently at an all-time low, meaning that the two countries’ governments now face the task of having to improve ties.

He said Croatia’s previous government had launched a number of undeserved attacks against Hungary but the government is aware that the current Croatian administration had nothing to do with these. However, since they were unacceptable attacks, it is not possible to pretend that they had not happened, he added.

A plan is being prepared to resolve open issues, he said. Important tasks include restoring railway links between the two countries, the construction of the Sarajevo-Osijek-Budapest motorway, the Croatian LNG terminal and the MOL-INA issue, Szijjarto added.

The completion date of the LNG terminal is now less pressing because, with the support of the European Commission, a Romanian route has gained priority from the point of diversification, the minister said.

In connection with troubled relations between Hungarian oil company MOL and Croatia’s INA — in which MOL has a majority stake — he praised ongoing “sensible and civilised dialogue”. The lack of such dialogue in the past had cast a shadow on intergovernmental relations, he added. Hungary expects a business and legal environment in which MOL can function as a responsible investor operating INA, he said, adding that the successful operation of both companies is in the interest of both countries, and a new style of communication is needed instead of sending messages through the media, he added.

Szijjártó noted that bilateral trade between Hungary and Croatia increased by 22 percent in the first 11 months of last year compared with the same period of 2014. The year 2015 saw the highest trade turnover of all time. To ensure that this trend continues, Eximbank is opening a 185 million euro credit line to aid development cooperation between companies in the two countries.

Commenting on the migrant crisis, he said Europe is currently defenceless and unable to stop or control the wave of migrants arriving from the south and south-east. A line of defence must be set up in the south and a fence might have to be built on Greece’s border with Macedonia and Bulgaria, otherwise the threat of terrorism will increase and public security deteriorate in Europe, Szijjarto said.

Croatian Foreign Minister Miro Kovac said friendship between Hungary and Croatia goes back a long way and it is in this spirit that the two countries will approach settling their differences. He added that he had talked to representatives of the Croatian minority in Hungary, who said they were satisfied with the Hungarian government’s treatment of the minority. Croatia is also making an effort to treat its minorities well, he said.

Kovac said Croatia plans to pursue intensive cooperation with Hungary and the other countries of the Visegrad Group.

He said that Croatia was open to consultations in handling the wave of migrants. Coordination is key because in the long-term a solution can only be found at EU level, with the involvement of all members, he added.