The EU is going through one of the gravest crises of its history and the migration situation has generated serious disputes within the bloc, Szijjarto told a press conference after the talks. “But the Hungarian government and the Austrian foreign ministry share many of the same views [on migration],” Szijjártó said. The Austrian minister’s proposals concerning the migrant crisis are in line with Hungary’s “Schengen 2.0” plan, he added.

Szijjártó said Europe must completely rethink its migration policy. “Instead of trying to figure out how to bring in even more people and distribute the burden of migration among member states, the EU should find ways to reduce the migration pressure,” the minister said.

The crisis will not be resolved without proper border controls, Szijjarto insisted. He reiterated Hungary’s stance that hotspots should be set up outside the EU for registering migrants. He said migrants should not be allowed to enter Europe until it can be determined that they are eligible for asylum, arguing that it is very hard to send people back to their countries of origin even if it is proven that they had entered Europe illegally.

The two ministers agreed that people who try to enter Europe illegally should not be eligible for asylum. Neither should they be allowed to enter Hungary illegally from safe third countries, Szijjártó said.

Regarding bilateral ties, Szijjártó said Hungary’s interests lie in maintaining a strategic alliance with Austria. The two countries’ ties must be based on mutual respect, he added.

Austria is Hungary’s fourth largest investor and second biggest trading partner, Szijjártó noted. Around 3,000 Austrian companies do business in Hungary and employ some 75,000 people, he added. 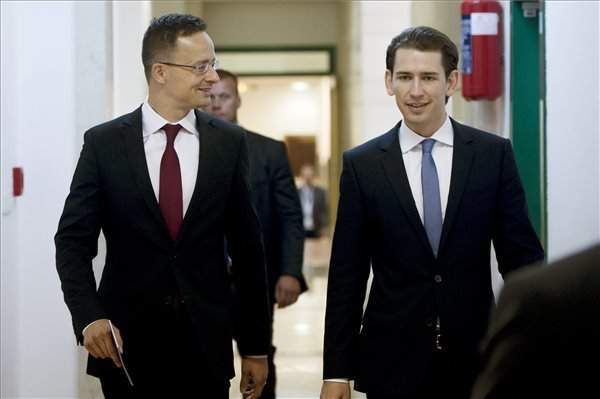 Kurz said that in order to guarantee a Europe without internal borders, the EU must first ensure the protection of its external borders. Europe should be the one to decide who gets to enter the bloc rather than people smugglers, he said. If the EU fails to protect its external borders, it could find itself in a situation similar to the events of last year. Member states would then have to take steps to secure their borders, Kurz said, adding, however, that the bloc today “should not have to experience” what it is like to have internal borders.

The minister said Europe should not abandon peripheral countries. He said that if migrants enter the continent legally, Europe can keep their numbers under control and can prevent certain countries from being overburdened by them.

Kurz said it was clear that Europe’s refugee system was not working and the bloc must work together to put together a new one.