Orbán, who is embarking on his fourth term in office, was elected with 134 votes in favour and 28 against.

After the election, Orbán took his oath of office.

Orbán vows to serve all Hungarians in fourth term

Orban, in his inaugural address to parliament, noted that his governing alliance holds two-thirds majority in parliament, but he vowed to “serve the three-thirds”.

“The homeland cannot be in opposition with itself because its vastly transcends the parties,”

Orbán said. “Serving it cannot depend on whether we happen to be in opposition or in government.”

“I stand before you optimistic, hopeful and ready to act,” the prime minister told lawmakers.

Orban thanked the election’s participants, singling out voters who had backed the Fidesz-Christian Democrat alliance.

Orbán pledges to plan for next 12 years 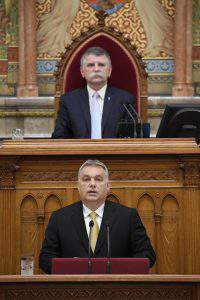 He said his Fidesz government was thinking in terms of planning for the next twelve years.

Orbán said Hungary was “in the right constellation”.

“Hungary’s case has been won. Everything needed for great plans ahead has already come together,” he said.

Hungarians, he added, now believed that “tomorrow can be better than today if they do their job right”.

“They want a government that is worthy of their future. This encourages us — and entitles us — to make plans not only for the next four years but for the next ten years, too. Indeed, we should think in terms of twelve years,” Orbán said, adding that this would be in line with the demand for responsible government, given that the next European Union budget will conclude in 2030.

Orbán: ‘Era of liberal democracy is over’

“The era of liberal democracy is over.”

“In place of the tinkering of liberal democracy that has run aground, we will build a Christian democracy of the 21st-century which guarantees human dignity, freedom and security, protects gender equality, the traditional family model, holds back anti-Semitism, protects our Christian culture and gives our nation a chance to survive and prosper,” Orbán said, referring to “Hungary’s response to a changed world”.

“I know that many will consider it impossible, but I think it is achievable for Hungary to be among the top five European countries to live and work in by 2030,” he said.

“We must live with the confidence and dignity of a country that understands that Hungarians have given more to the world than that which they have received,”

He added he wanted to convince neighbouring countries to join forces and make the Carpathian Basin Europe’s “securest and fastest-developing” economic, trading and transport area.

“Over the past years, we have shown time and again that no one need fear Hungarians; whoever cooperates with us reaps the profits,” Orbán said.

Orbán: ‘We will fight to protect our borders’

Hungary will continue to oppose mandatory migrant quotas, stand up for Europe’s Christian culture and fight to protect its borders, PM Orbán said.

“Thousands of paid activists, bureaucrats and politicians are working in Brussels today to have migration declared a basic human right,”

Orbán insisted. “This is why they want to take away our right to decide for ourselves whom to take in…”

Orbán said his government wants a strong Europe, peace and to reach mutually beneficial agreements with the European Union.

“We need the EU and the EU needs us,” he said, adding that his government would represent the view that the bloc should function as an alliance of free nations. It should “give up its delirious nightmares of a united states of Europe … and come back down to reality.”

“Now that I’ve taken my oath, I reaffirm to every single member of the nation, all fifteen million Hungarians … that all my actions will be dedicated to the service of our nation and country, the Hungarian people, Hungarian interests and Christian values,” he said.