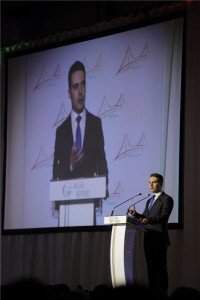 There are some social and political tasks that the opposition must carry out if the government does not, or if it does not face up to its responsibility, Vona said in an annual assessment.

Among these tasks, Vona named relieving deep social division, dealing with the “baneful degradation” of political culture and nurturing and mobilising sectors in the most serious condition.

Jobbik must take on, from the side of the opposition, the government’s responsibility in these areas, he said.

Fidesz and the Socialists cannot and do not even want to do anything against division, because that is an element of the two parties’ very being, he said. Jobbik, on the other hand, understands peoples’ pain from all angles.

The government believes it is above the people, Vona said, asking “Is this the civic Hungary?” Fidesz fought so hard against socialism that it built up another of the same regime, against which a genuine party of the people must stand, he added.

The freedom of the individual and of society must be protected from the government, Vona said, warning that the government’s amendments to the constitution were preparations for government by decree. If the defense of the country is what is at stake, then the government has the support of Jobbik, but “we’re not chumps either, we see what’s going on”, he said. People are afraid of terrorism and of Fidesz’s “power madness”, and Jobbik wants to defend them from both, he added.

Joining forces with these groups can force a retreat by the government, he added.

Vona said he would personally prepare the consultation from Monday and visit all of the county seats in Hungary.

He said declarations of assets, the right of immunity and the statute of limitations would be questions dealt with under the topic of corruption. In education, questions will include the operation of the Klebelsberg Institute, which runs the country’s schools, pay and appreciation for teachers, children’s workloads, unemployment among university graduates, vocational training, segregation and integration, and violence in schools, he said. On the topic of healthcare, he said the system was underfinanced, pointing to shortages of equipment at hospitals and in ambulances, as well as problems with gratuities paid to doctors and waiting lists for medical procedures. Healthcare has become a luxury, he said, adding that the drug lobby needed to be scaled back. He also raised the idea of sport for fitness as preventative medicine.

Vona said the European Union was sick. Instead of viable solutions, the EUs leaders glorify sickness, he said. They are fools, aberrants, criminals or all three, he added.

Vona expressed a goal to build up a strong, solidarity-based Europe on the foundations of the diversity of its nationalities.

He called the left “boring”. “If they disappear, there won’t be any fewer of us,” he added.

Discipline in observing coronavirus precaution measures has loosened mostly in and…

The Czech Republic reported that confirmed COVID-19 cases had surpassed 5,000 but…
We and our partners use technologies, such as cookies, and collect browsing data to give you the best online experience and to personalise the content and advertising shown to you. I accept
Privacy & Cookies Policy