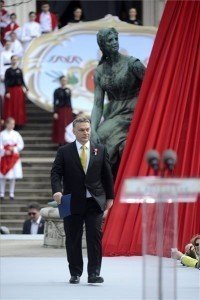 Speaking at official celebrations of the anniversary of Hungary’s 1848 revolution, the prime minister said that those two values are an “eternal benchmark” for “all generations of Hungarians to be measured”.

Orban also said that March 15, 1848, the outbreak of the Pest revolution and Hungary’s subsequent freedom fight was a “sacred moment of the rebirth of the Hungarian spirit”.

Referring to the present day, Orban said that once again “a strong Hungarian nation is in the making”, and argued that “in the past 25 years all Hungarians could understand that we will either be successful together or not at all”. “Together, or no way, that was the lesson of the 1848 revolution, too,” he said.

Orban insisted that though 167 years have elapsed since the revolution, “the fight for sovereignty continues, and we cannot rely on anyone else but ourselves”. Freedom means that each nation has the inalienable right “to walk their own path”, he said, adding that “the nation of Kossuth and Petofi will just laugh at attempts to give us lessons in freedom or democracy”.

On another subject, Orban said that Hungary is a part of Europe, whose future “we want to shape together with the other nations”. “Europe is now full of questions and Hungary is full of answers,” the prime minister added.

Budapest economy European Union Fidesz Government History Hungary migration Ministry of Foreign Affairs tourism Viktor Orbán
Foxes and wild boars no longer surprise the citizens of the South-Hungarian city,…
The government aims to put a stop to the "prison business" which has grown into a…
Confronting the fates of the survivors of the forced labour camp in Recsk, in…
As the project of the company Market, the new lounge will feature resting and waiting…
We and our partners use technologies, such as cookies, and collect browsing data to give you the best online experience and to personalise the content and advertising shown to you. I accept
Privacy & Cookies Policy