Chotin, Slovakia, November 29 (MTI) – A memorial plaque dedicated to the post-WWII deportation of ethnic Hungarians from Czechoslovakia to Hungary was inaugurated in the Reformed church of Chotin (Heteny) in southern Slovakia today.

He added, however, that “time is ripe for raising the tough issues to be resolved”, including Slovakia’s approach to dual citizenship, reinstating Hungarian language rights, improving the schooling of ethnic Hungarians and the dispute over the withdrawal of the Benes Decrees.

After the world war came to an end, nearly 170,000 ethnic Hungarian residents of Slovakia were forced to leave their native land and were deported to Hungary or the Czech lands. The move was based on a series of 1945 decrees issued by Czechoslovak President Edouard Benes, which criminalized all ethnic Germans and Hungarians living in that country, collectively blaming them for Nazi atrocities during the war and depriving them of their property and citizenship. 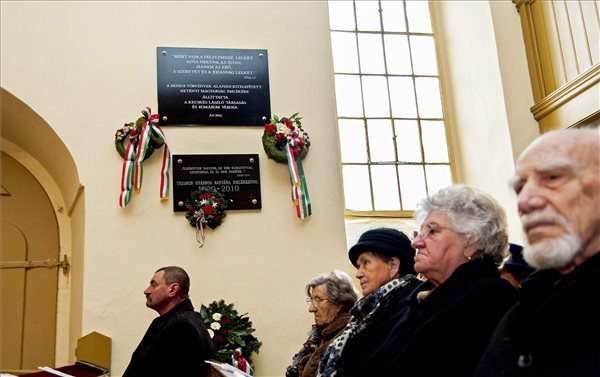 Most decrees are still in force in both the Czech Republic and Slovakia. The degrees remained in effect even after the enactment of the EU’s Lisbon Treaty.

Sara Lucza, mayor of the village located close to Hungary’s border, noted that 48 families had been deported to Hungary and 64 families to the Czech lands from Chotin.

Balint Turi, deputy mayor of nearby Komarom in Hungary, called the Benes Decrees a “legal disgrace” of Europe.