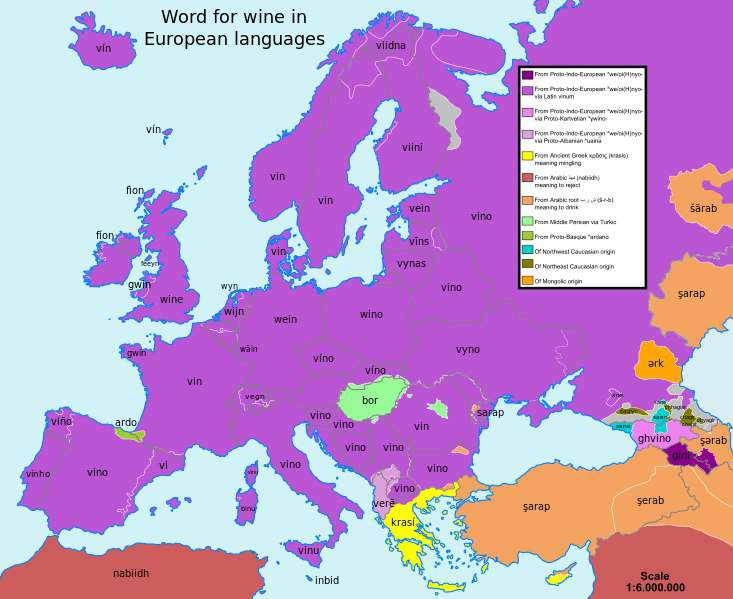 If you’ve been following us and the mini language lesson series for a while, you’ve probably learned that the Hungarian language is full of surprises. We know that learning it seems like an impossible mission at first, but we try to bring it closer to you with fun approaches. In this episode, we’d like to share with you a map that shows how languages spread through the word ‘wine’.

Hungarians love wines, we have 22 wine regions which produce world-famous beverages. There’s a good chance that you’ve heard about either the Egri Bikavér or the Tokaji aszú. When in Hungary, make sure to visit one of the beautiful wine hotels, wine bars or take part in wine tastings 😉

Getting back to the beauties of languages, The Culture Trip recently shared a cool map, which shows how language spreads around the world. They come to the conclusion that language flows like wine from the bottle. By mapping how each language spells ‘wine’, the root of the given language can be determined.

Most of the words are similar, expect for a green spot in the middle: Hungary.

According to the map, the Hungarian word ‘bor’ developed from Middle Persian via Turkic. To find out about the word’s origin, we turned to our dear friend, Dailymagyar, whom we frequently cite in our mini language lessons.

According to one of his posts, Hungarian professor and writer Dr. Róbert Gyula Cey-Bert believes that the Hungarian word ‘bor’ has its origins stemming back to the Huns. He reckons that the first written Hungarian words were the combinations of the words Tengri meaning sky God or Heaven and wine, Bor-Tengri. You can read more about the origin of the word on the following image:

Fun fact: The money you customarily give in addition to the basic price to a waiter/waitress in a bar, café or restaurant is called ‘borravaló’ in Hungarian.

If you want to learn about similarly unique Hungarian words, click HERE or HERE.