The international sanctions against Sudan were in effect for exactly two decades – but now that they have been dissolved, the country became one of the most promising destinations in Africa. And this offers many new opportunities to Hungarian companies as well, GLOBS Magazine said.

The autumn of last year was a milestone in the history of Sudan, because the country suffered from American sanctions since 1997.

The United States of America didn’t only dissolve the entry ban concerning Sudanese citizens that was introduced during the presidency of Donald Trump, but also dissolved the trade embargo and other sanctions that had been in effect since 1997. All of this was done in such an international environment, where the USA rather tightens its policies with the other countries of the region. The justification of the dissolution of the embargo states that the USA appreciates the economic and political opening Sudan accomplished recently. One of the reasons why the State Department dissolved the embargo was that the Sudanese government “helped reach humanitarian organisations in Sudan”.

So the settling of Hungarian-Sudanese relations is not a “guerrilla action” – it was preceded by the dissolution of international sanctions. However, it must be admitted that Hungarian diplomacy took the first step right away – the Sudanese Foreign Minister visited Hungary not long after the American decision. The aim of Prof Ibrahim Ghandour’s visit was the strengthening of economic and technological cooperation between the two governments. Besides the hosting Hungarian delegation, Foreign Minister Prof Ibrahim Ghandour, his head of cabinet Mr Fadoul Mohamed, Mr Khalied Musa Dafalla and Mrs Sahar Mohamed Ishag were also welcomed by the Sudanese diplomatic delegation accredited to Hungary by the Sudanese Department of European Affairs. Despite the strict schedule of the delegation, the members were taken on a short sightseeing tour and also visited Sudanese representations. The head of the Trade Department of the Republic of Sudan’s Embassy in Budapest, Mohamed Salaheldin Hag Ali hosted the Sudanese Foreign Minister in his branch office located in the impressive historic Castle District. The Hungarian and Sudanese parties previously held talks at the UN General Assembly in New York several times before the visit to Budapest in order to establish efficient economic cooperation. The result of the negotiations was the visit last October, during which the representatives of the two countries signed a bilateral document, according to which the Hungarian-Sudanese economic joint committee would be established soon, thus creating the institutional frameworks for the goals documented in the agreement.

Not long after the talks held in Budapest, István Mikola visited Khartoum, where several important agreements were signed. István Mikola highlighted health care as one of the most important fields of cooperation. The Sudanese Minister of Health Care said that the politics of sanctions of the previous years caused serious damage in the health supplier system of his country. At the same time, he expressed his hopes that

the restoration of hospitals could speed up in the current situation and Hungary could play an important role in this task.

Because the Sudanese health care is in deep trouble. There are no PET CT machines in the country populated by 40 million people, because hospitals couldn’t purchase them due to the embargo. But there’s also shortage of medical devices, and the ones they have don’t function due to the lack of spare parts. Now that there’s a chance to replace the shortcomings, the country counts on Hungary in many aspects, for instance, the training of experts. Until then, patients who can afford it come to Hungary. They mainly resort to oncological treatments that are not available in Sudan. Hundreds of patients have come to Hungary with this aim in the past years. This doesn’t only increase the patients’ chances of survival, but also signifies an outstanding income for Hungarian health care. The Hungarian diagnostic centre to be established in Khartoum will help further develop this field. Miklós Kásler, leader of the National Institute of Oncology, who also visited the capital of Sudan as the member of the delegation, said that curing is inconceivable without diagnoses, therefore the development of the centre is a highlighted goal of the Hungarian party.

The Sudanese trade delegation in Budapest has played an important role in introducing new Hungarian technologies to the Sub-Saharan region in the past years.

There’s no doubt that Sudan is not a rich country, but due to the twenty years of politics of sanctions she is in need of many things, which can be imported from Europe. First and foremost, they are in need of technology that they couldn’t buy in the past twenty years, and they also need know how that they couldn’t acquire due to the twenty year fallback. Even though the country was shocked by the secession of South Sudan and consequently by the loss of oil stocks, they still have huge stocks in raw material, not to mention that Africa’s best quality lands, 60% of which are unexploited, are found in the country. This is why the race is great, just take a look at a flight to Khartoum – it is full of European businessmen who all want to sell their products, services on the Sudanese market.

These businessmen change flights in Cairo or Istanbul, because the great European airlines couldn’t launch flights to Khartoum due to the sanctions.

Hungary could be a pioneer in this field with a direct Budapest-Khartoum flight, which is included in the Sudanese-Hungarian aeronautical agreement that was signed by István Mikola. 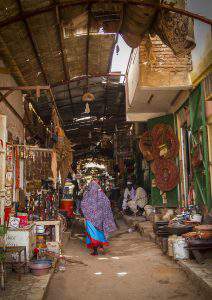 The original agreement that was concluded in the 1960s became forfeited, furthermore Sudanese planes didn’t answer the technical and safety requirements of the EU, and therefore they couldn’t enter the Hungarian airspace. But now the parties are very hopeful that the first flight coming from Khartoum will soon land in Budapest. One of the greatest private Sudanese airlines already announced that it wants to use our capital as an aerial hub, from where further flights could be launched to West European cities.

Hungary – even though it tries to enter the new market as quickly as possible – doesn’t aim to go before the international community, it aims to keep up with them. This is demonstrated well by the fact that the Sudanese Foreign Minister recently held talks with Boris Johnson in London, where they touched upon the same topics as the Hungarian delegation in Khartoum. And when it comes to economic relations, the main topic of the Hungarian interest, it must be mentioned that a large economic forum was also held in London after the negotiations and it was attended by the representatives of illustrious companies. However, this wasn’t the first step in British-Sudanese relations: a British delegation landed in Khartoum the day after the sanctions were dissolved.

This is why the projects that have already been executed and that are great references for the future are so important. One of these outstanding projects was the public lighting of Al Fashir, capital of North Darfur.

The issue was solved by a Hungarian company with solar cell lights. This doesn’t only prove that it’s possible to do successful business in Sudan, but

it also attests that Darfur is not a warzone anymore, contrarily to what several articles suggest.

The hostility between different ethnic-political groups is mostly over, so much so that the government’s current goal is the restoration and development of the region. And when it comes to the utilisation of solar energy, further results can be expected due to the example of Darfur in some measure. The electricity supply of Sudan’s most elegant hotel is currently being converted to solar energy by Hungarian experts. But there are several other fields from the cosmetic industry to water management, where businesses or advanced negotiations are on the way.