New rooftop terrace opens in Budapest, this is what the view will look like – photo gallery 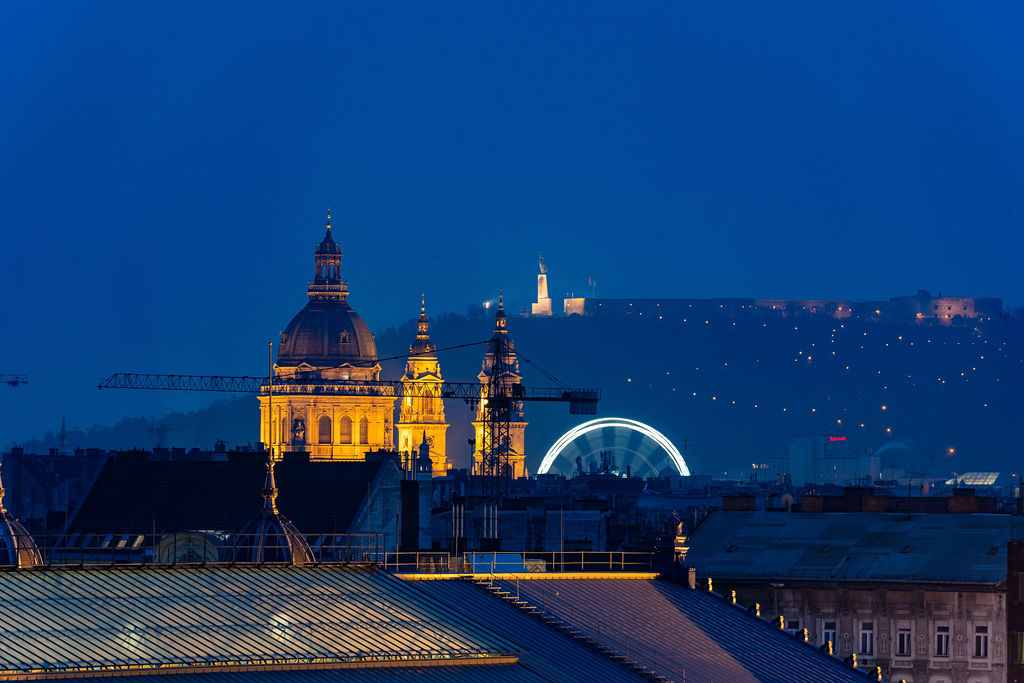 The Crowne Plaza Budapest hotel will soon open two rooftop terraces to the public, offering a unique panoramic view of the city and its beautiful architecture including the Nyugati railway station’s hall originally designed by the Paris Eiffel office.

A new perspective of Budapest is emerging with the appearance of ever more proliferating, often hidden rooftop terraces and community spaces. It all started in 1911, when the public was impressed by the special feeling of discovering an almost unknown face of the city while taking a walk on the first such rooftop, the observation deck on the top of the Paris Department Store. Today, it is increasingly common to be able to soar gently above the houses and view the city’s often unnoticed beauties from above street level.

Built in 1999 to the design of legendary Hungarian architect, József Finta, the Westend site, considered one of the largest shopping centres in the region, also houses a 230-room hotel.

However, the last two decades have brought new challenges for the hotel industry, and in response, the owner of the property, Granit Polus is renovating the building, which recently opened as the Crowne Plaza Budapest, inspired by the architecture of the 19th century Nyugati railway station and designed by the Polish architectural firm Tremend, to meet 21st century standards.

In the renewed hotel, not only the interiors will be given a fresh look, but also the roof terraces in two directions.

The rooftop garden of the mezzanine floor Cult restaurant, which will open early next year, will offer a magnificent view of the recently renovated Nyugati railway station and its towers, while the Club Lounge on the top floor of the building will open up to the old residential buildings and their imposing roofs on Váci ut, and beyond them to the Buda Hills.

The restaurant’s roof garden will soon undergo a landscape- and interior design makeover, but its most spectacular feature is the renovated Nyugati station hall and its roof.

The history of the building dates back to the mid-19th century. When the day dawned on 15 July 1846, the people of Pest flocked to the then desolate suburbs to see the great miracle, the inauguration of the first railway in Hungary, the Pest-Vac line and the station building that housed it, a project that had been the subject of controversy for years.

In the engravings of the time, there is no sign of today’s bustling urban life around the celebrating crowd and the “great building standing majestically”, but the structure, along with some of its more prestigious companions, was already a foretaste of Pest, which was to develop from a small town into the capital, and then Budapest.

The cityscape that a modern-day observer stepping out onto the roof garden of the Crowne Plaza sees is essentially defined by the station’s reception building, the present-day Nyugati railway station hall, opened in 1877 by the Austrian State Railways Company, and the massive wave of construction it has generated. The design of this imposing station building, which included a number of technical feats, was carried out by August W. De Serres and the Paris Eiffel office, who eventually drew up the final plans in Vienna. The building became one of the architectural jewels of the capital of the time – and of today. The press of the time considered it one of the most beautiful buildings in Europe, but it was also the first large span building in Hungary, and in this respect it surpassed even its Viennese contemporaries. Architectural history compares the French-style station to the Gare d’Austerlitz (formerly Gare d’Orléans) in Paris. By the turn of the century, Nagykörút (the great circular boulevard) had been developed with its magnificent apartment blocks, hotels and cafés had opened in the area in front of the station, and the development of the previously industrial area of Vaczi ut had begun.

The renovation of the station hall and roof structure has recently been completed. The entire steel structure of the hall has been cleaned and given a three layer blue protective coating, the timber of the roof has been replaced and re-shingled, and the six tower roofs, which can be observed from the terrace of the Cult restaurant even closer, have been completely renewed. The new lighting system in the station, also completely replaced, adds a special colour to the view in the evening through the glass roof.

Beyond the railway station, the dominant buildings of Nyugati Square itself come into view.

In 1984, the Skala Metro department store and office building, designed by György Kővári, was inaugurated to crown the modernity of the square, with its multiple broken masses and its facade entirely covered in smoked glass, which seemed very innovative at the time. To the right, at the corner of Bajcsy-Zsilinszky ut and Stollár Béla utca, the large-scale building that housed a newspaper office, printing house and apartments was built in 1894; today the contemporary mansard roof of the Eiffel Palace and it’s very characteristic top, soar into the sky.

The row of domes, which actually begins with the Basilica and the Parliament building on the distant horizon, continues along Váci út.

The residential house at 4 Váci út was designed by Alfred Wellisch, the architect of many apartment houses – and more than one public building – during the period, has two imposing domes on top, which sprout into a sculptural ornament of winged figures. The neighbouring house is also Wellisch’s, with its elaborate façade and even more ornate courtyard, staircase and wrought-iron gateway, all of which suggest the urban milieu of the era. If we continue along the road, we can also see the two characteristic archaic towers of the Church of St Margaret of the Árpád House in Lehel Square. The neo-Romanesque church, consecrated in 1933, is designed by István Moller modelled on the ruin church in Zsámbék, while the rose window on the main façade and some other stained glass windows are the work of renowned glasswork artist, Miksa Róth.

From the rooftop, the nearer past and present of Budapest can be seen alongside the distant past. The first section of the office axis on Váci út is dominated by a few contemporary, taller buildings, and behind them the rich roofscape of Ujlipotvaros, a complex of buildings mostly built in the first half of the 20th century, provides a backdrop. Among them, the monumental, closed brick façade of the Katona József utca transformer house, designed by Ybl Prize-winner Erno Lestyan and built in 1970, stands out as a defining piece of industrial and energy architecture of the period. In the distance, we can see the Buda Hills, from the iconic silhouette of Gellért Hill with the Statue of Liberty to the former SZOT Hotel, which dominates the side of the Rózsadomb, opened in 1971 and recently revived as a luxury apartment block.

Looking in the other direction, in the foreground, the exciting three-hectare Westend rooftop garden, a pioneer of its kind, covers the first tracks of the railway station. Looking across the railway area to be regenerated, behind the varied facades of Podmaniczky utca, the building landscape of the entire Pest side is essentially revealed.

The Crowne Plaza Budapest, part of IHG Hotels and Resorts with 230 rooms and 13 function rooms, is currently operating in soft opening mode,

with the first phase of the renovation completed in the reception areas and two floors, and has opened its specialty café, Axis Café and Lounge, overlooking Váci út. The entire building on Váci út, including the rooftop terraces of the Cult restaurant and Club Lounge, will be handed over to the building’s owner, Granit Polus, early next year. 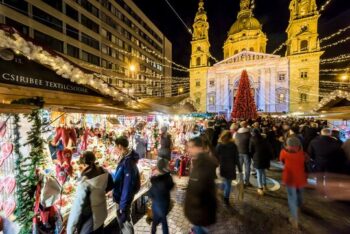