On this weekend: Busójárás 2015 – Masquerade at Mohács

Busójárás is the celebration of spring, which can be found in other nations’ traditions, too. It shows similarities with the Rio Carnival, with the Carnival of Venice and also with the traditions of African tribes. It is also the celebration of the Croats living in Mohács. It is held in February, at the end of the Carnival season (”Farsang” in Hungarian), starting on a Thursday. The biggest celebration is on Farsang Sunday (the seventh Sunday before Easter Sunday), and ends with the Burial of Farsang on the following Tuesday (Shrove Tuesday).

At Mohács, the origin of the tradition is explained with the expulsion of the Turks. According to a legend, the inhabitants of Mohács dressed into scary masks and crossed the Danube with noise-making tools to chase away the Turks.

The dresses of the Busós were the same as it is today: short fur coat, trousers filled with straw, and leather shoes. The coat was held together by a belt, on which the cowbell was hanged. In their hands, they held a wooden mace. The most important item, which made them real Busós: the mask, traditionally painted with the blood of animals.

The dressed Busós are followed by Jankeles, whose role is to keep the people (especially the kids) away from the Busós. They slog the children scorning the Busós with bags filled with rags and sawdust.

The actual purpose of the roaring groups of Busós was to express their good wishes, perform spells, and receive food and drinks. The tradition has lost much of original characteristics, but it improved a lot in terms of spectacle.

The Busójárás was inscribed on the UNESCO’s ”List of the Intangible Cultural Heritage of Humanity” in 2009.

In 2015, the programs are the following 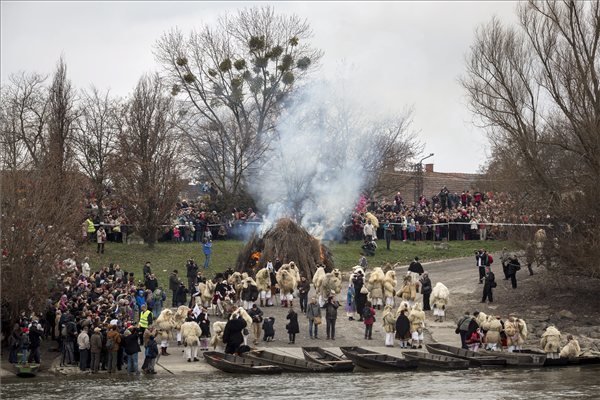 This year, the Busójárás is held between the 12th and the 17th of February. The opening exhibition ceremony of Zoltán Ribl (Olympic athlete) will be held on February 11, 5 p.m., at the Kanizsai Dorottya Museum.

The programs start on February 12. Carnival preparations will be organized by the Regional Cultural Center of Mohács at the Youth Centre. Most importantly, the carnival procession is also on that day, starting from the Sokac Circle and ending at Széchenyi Sqaure. Throughout the day, open-air programs can be visited on the main square, and the tools and and accessories of the Busójárás will be demonstrated at Széchenyi Square.

On Friday (February 13), state school class groups can take part in a competition called ”Busókviz”. From 3 p.m., you can visit the workshop of mask-carver Antal Englert, get introduced to the Busó procession, and discuss about living and changing traditions. From 8 p.m. on, concerts and dance houses will be organized at Deák Square.

You can buy souvenirs at the folk art and handicraft fair on Saturday. During the wedding march of the Botos Busó group, you can leave your children at the handicraft workshop. In the afternoon, dance groups will be performing, and several concerts will be held. At 4 p.m., you can take a look at ”Inviting Spring”, which includes carnival fun games and a dance house. At 7 p.m., you can visit the Hungarian ball at the Youth Centre, or go to the Sokac ball after 8 p.m..

The folk art and handicraft fair remains at the same place on Sunday, too, complemented by the National Jewelries Display and Fair at the Kanizsai Dorottya Museum. From 10 a.m., you can visit open workshops, folk dance programs, and concerts. At 10 a.m., you can also take a look at the short show of Busó groups. At 12:30, after the performances of dance groups, the Busós will cross the Danube in boats. It is also worth to be at Kóló Square, where Busó groups will be presented. The Busó initiation ceremony will be at 15:30 and the mayor will make a speech. Right after this, make sure you do not miss the carnival celebration in the main street. At 17:00, the bonfire will be lit, and you can see the round-dance of the Busós. After 19:00, you can also dance with the Busós at the Duna Office House.

On Monday (February 17), you can join the wreath-laying at the memorial plaque, and on Tuesday, you can see the departure of Busó groups at 15:00. After this, free carnival celebration will be held in the streets, and folk dance ensembles and singers will entertain people until 17:20, when the bonfire will be lit again, and the coffin of winter will be burnt.