The opposition parties criticised Prime Minister Viktor Orbán for his failure to address the crucial issues of the nation in his parliamentary speech on Monday.

Opposition Jobbik accused the prime minister of neglecting health care and education. Party leader Gábor Vona said Orbán has made Hungary a European leader in terms of corruption. “Corruption is at the core of the government and businessman Lőrinc Mészáros is Orbán’s personal stooge,” he added.

Vona said Jobbik’s initiative for an EU wage union aims to help people succeed in their homeland. In order to achieve this, wages need to be increased, he said and asked Orbán why he would not support the initiative.

If Jobbik wins the election next year, the border fence will stay intact but there will also be a border guard force there to ensure that no migrants enter Hungary, regardless of whether they are poor or rich, Vona said, referring to the residency bonds scheme. 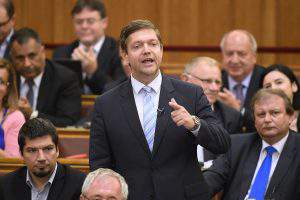 The Socialists called for a fairer Hungary, a country which belongs to the “first circle” of the European Union rather than to the peripheries.

Group leader Bertalan Tóth said that the government’s “national consultation” survey failed to ask people’s opinion about such important issues as education, health care, emigration and whether they agree with high spending on stadiums. He said the Hungarian economy was growing thanks to European Union funds while only the rich get to enjoy the benefits of tax cuts and the operation of the state costs more than in the past.

She criticised Orbán for accusing Brussels of siding with the terrorists and said Orbán should stop calling those people terrorists with whom he would sit together at meetings for heads of state and government. If Orban were brave enough, he would invite a referendum on Paks instead of holding national consultations, she added.

The Hungarian Liberal Party called on the government to withdraw the bill on the transparency of foreign-funded NGOs, the party leader told a press briefing on Monday.

The government is conducting a “political witch hunt” against civil organisations, Gábor Fodor said. He initiated that parliament should approve a resolution, taking a stand for the independence of civil society.

Fodor insisted that state-run companies should not be allowed to finance NGOs without a proper tendering process. The operation of the National Cooperation Fund, a state fund overseen by the minister responsible for cooperation with civil organisations, should be reviewed, he said.