The government office chief, János Lázár, said on Thursday that what is at stake in the current lawsuit concerning migrant quotas before the European Court of Justice is the right to determine who lives in the country and who stays.

If this is taken away from parliament, the government and the people then the very basis of Hungarian statehood and sovereignty would be endangered, he said.

Speaking at a weekly government news conference, Lázár said the Hungarian standpoint is that the quota system is wrongheaded and that it has proved a failure. The problem’s solution is not to introduce quotas. “We will not accept any kind of quota,” he said. Hungary does not want to spend taxpayer money on supporting migrants. Instead it wants to support Hungarian families and its youth, he added.

Hungary disputes the process whereby the European Commission overrides the decision of the European Council, namely that acceptance of migrants can only be undertaken on a voluntary basis, he said. In other words, if a member state does not want migrants, it should not be forced into accepting them. Lázár said at the same time that the dispute was of the nature of “David versus Goliath” and Hungary could only rely on the backing on the Visegrad Group of countries and countries in central Europe.

Lázár called completion of the second fence along 155kms of Hungary’s southern border, costing 4.8 billion forints (EUR 15.5m), an important development. “This has perfected border protection,” he said. The “legal seal” combined with the fence fully protects Hungary and guarantees that migrants cannot move around freely in Hungary. Moreover, nobody can enter the country illegally, he added.

At the same time, Lázár said Hungary could maintain systematic EU border controls because the result was waiting times of several hours.

The number of illegal border crossings amounted to 185 by May 9 this year and the number of asylum applications has been 1,578 so far. Human smugglers and migrants now avoid Hungary, which means “we are Europe’s safest country”, he said.

At the same time, the government believes it necessary to be prepared for a migration crisis. There is a strong consensus in Hungarian society that Hungary should not accept or invite migrants but instead support Hungarian youth, Lázár said.

He also said that critics of the government’s “national consultation” failed to understand the essence of democracy; the public survey is about fully effectuating democracy. It is right for the government to ask people their opinion regarding various important issues, and this applies to the period between elections, too, Lázár said. The number of responses to the survey now stands at 1.276 million, a record high, he added.

The government cannot stop Brussels alone, he said. It will only do so if voters continue to help out, he added. 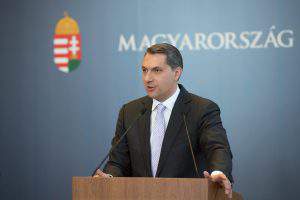 The Brussels body is trying to “fool Hungarian voters” by stating that energy price liberalisation would be beneficial to Hungary. The experience of Hungarian consumers shows the opposite: over twenty years, in a liberalised market, prices always went up. It is right for the Hungarian government to fight for its right to influence gas and electricity prices.

Commenting on the question of migrant quotas in the national consultation survey, he said the mandatory quota is an invitation to migrants. Lázár said that in the next year, this is likely to be the greatest dispute between the Hungarian government and the commission, and also the hardest to resolve.

Lázár said that the text of an EU development document on the current agenda contained a proclamation tying the future success of the EU to the number of migrants arriving in the bloc, but Hungary’s standpoint is that “the fewer migrants are needed the better”, and it will therefore veto the document. Whenever the EU tries to legitimise immigration in various documents Hungary will oppose it, he added.

Lázár noted that the United States had asked European NATO member states to spend more on defence and implement developments. Hungary can best fulfil its NATO obligations by increasing its defence spending and starting developments, he said, adding that Hungary’s priority was to procure transport planes.

Asked about the Norway fund, he said all NGOs should have access to support, and the model for this should be the Swiss agreement, he said in reference to the coming funding cycle. There have been no negotiations since November last year. The Norwegian negotiating partner will arrive in Budapest in two weeks’ time, he said, adding the question was not whether Norway would provide money but rather how it would do so.

He said Hungary was ready for a compromise on the sum of money but lawmakers would not change their bill on NGO financing at the request of the Norwegian government. It is a matter of principle in the EU that issues covered by the right of association should fall within the competence of member states, he added.

Lázár underlined the government’s position that organisations funded from abroad should operate transparently, and he also said it should be the Hungarian parliament that decides on tax and support for job creation in Hungary.