The prime minister has not criticised Czunyi’s work, he insisted. Viktor Orbán said she should still have a major role in public education, he added.

The central body overseeing public education (Klik) will not be scrapped but changes will be made to its operation, Balog said. Schools will continue to be under central control but he and Palkovics, state secretary for the whole of the education system from now on, will have full powers “to determine what should be corrected”. He added that a contested system of evaluating teachers would be retained, but admitted that the administrative burden on teachers was too great. 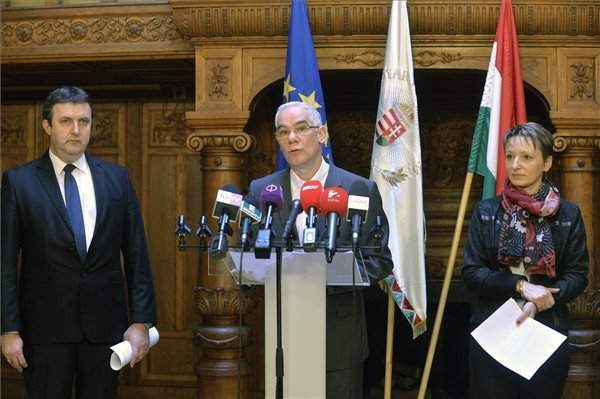 Parties of the opposition said that Czunyi’s removal from the helm of public education will not in itself resolve the sector’s problems.

The Socialist Party said in a statement that while Czunyi’s removal is necessary, it is the minister that is responsible for the situation’s escalation. “Balog is the real obstacle,” the statement said, adding that he should step down. Istvan Hiller, Socialist deputy speaker of parliament and former education minister, called for systemic changes.

Jobbik said removing Czunyi should be accompanied by professional adjustments and a “real national consultation”.

The leftist Democratic Coalition (DK) said that Czunyi was the first senior official to be “sacrificed” in the wake of the “obvious failure of the Orban-government’s education policy”. In a statement, DK deputy chairman Peter Niedermuller said that Czunyi’s withdrawal from her post amounted to little more than “changing the decor in the whorehouse”. He insisted that the prime minister was responsible for “ruining” public education, rather than a single state secretary.

The Egyutt party called on the government to start building a new public education system based on consensus rather than offering “sham forums and fake roundtables”. Replacing the state secretary is not enough, MP Szabolcs Szabo said, and added that Palkovics would “continue in the same direction and fail” unless structural changes are made.

Green LMP said “reshuffling” state secretaries would not resolve problems in public education. MP Istvan Ikotity insisted that the ruling parties had “driven the education system to the brink of collapse” and now it was “precious little” to remove the state secretary.

The government has cut education spending, centralised school management in an “extreme fashion”, banned stakeholders from having a say in education, significantly increased the burden on both students and teachers, introduced an “impossible” curriculum, and “imposed atrocious textbooks” on all schools, Ikotity said. The government should refund the cuts to the education budget and reconsider the very foundations of public education rather than making corrections, he added.

In a statement, the ruling Fidesz party said that “those people who are using teachers for political purposes are those people who, when in power, instituted pay cuts, closed several hundred schools, turfed several thousand teachers onto the streets and ruined the performance of students with their liberal education.” The broadest possible dialogue with teachers has begun in order to reduce the burden of bureaucracy on them, improve the operation of schools and ensure a more competitive knowledge-base for children, the statement added.

The government has raised teachers’ wages by 50 percent and turned 234 billion forints (EUR 757m) towards renovating schools across the country. Never before have so many children had access to free textbooks and meals, Fidesz added.