Budapest, January 14 (MTI) – Hungary can keep the flow of illegal migrants into its territory to a minimum as long as its border fence remains in place, government office chief Janos Lazar told a regular government press briefing on Thursday.

If there were no fence installed on the southern border, attacks similar to the mass assault on women in Cologne could have happened in Hungary as well, Lazar said.

Answering a question, Lazar said that the European Union seeks to return 45,000 illegal migrants to Hungary, but the country will refuse to receive them. He added that Hungary is sending back hundreds of migrants to Serbia on a continuous basis.

Concerning EU funding, Lazar said that Hungary targets paying out 2.048 trillion forints (EUR 6.5bn) this year. Under a government decree all EU tenders for the 2014-2020 financial period must be announced by June 30, 2017 and all outstanding amounts must be paid out by early 2019 at the latest, Lazar said.

Lazar said he had met Elzbieta Bienkowska, the commissioner in charge of internal markets, in Brussels on Tuesday and they held an “intense discussion”. The commissioner was “explicitly hostile” concerning Hungary’s plan to upgrade its Paks nuclear plant and the Budapest-Belgrade railway project, and she objected to the idea that Hungary would be signing investment contracts with either Russia or China, he said.

On the subject of Hungarian doctors seeking jobs in other countries, Lazar said Hungarian health care “cannot pay them more than they can earn in western Europe”. By comparison, he said that doctors who have recently quit their jobs at a Budapest hospital were earning around a monthly 1 million forints (EUR 3,200). He said there was huge demand abroad for well-educated Hungarian doctors. The government should consider training more physicians, said, adding, however, that salaries in health care should be increased commensurate with what the central budget can afford.

Answering a question about Hungary’s administrative reform, Lazar said that several government agencies would be gradually eliminated and suggested that the size of the tax authority would also be “adjusted”. 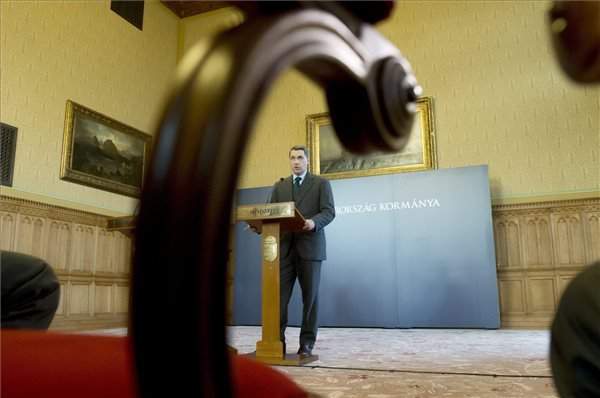 At his press briefing, Lazar said that the government is set to relaunch state land auctions in mid-February. He said the next round of auctions is set to last until the end of March with prices and legal conditions unchanged.

Lazar said the government has auctioned off 61 percent of the 197,000 hectares put up for sale as of the end of December, which generated a revenue of 171 billion forints (EUR 541.2m). Revenue from plots smaller than three hectares came to 6.1 billion forints, he said.

He added that around a dozen foreigners have bought farmland. They were able to do so due to “regulations the European Commission forced on us”.

The Hungarian Development Bank (MFB) is offering preferential credit to local farmers purchasing land. The MFB has so far provided 120 billion forints of credit for the purchases, Lazar said. More is available, he added.

Answering a question, he said his father and another close relative had bought farmland, but both have long been involved in farming and they raised a loan to pay for the land, he added.

Lazar also addressed the subject of Budapest’s ailing transport services and announced that the state will take over services in the agglomeration of Budapest from the municipality and is ready to also take over the suburban HEV railway. He added that the government accepted Budapest Mayor Istvan Tarlos’s view that the capital should only finance services that it is legally obliged to.

The prime minister has instructed the development and economy ministers to report the projected costs of the transport services in question at next week’s cabinet meeting. The government will involve national bus operator Volan and state railway company MAV, he added.

Answering a question, Lazar said that recent amendments will ensure that the funds necessary to finance the operations of Budapest’s public transport company BKV are available.