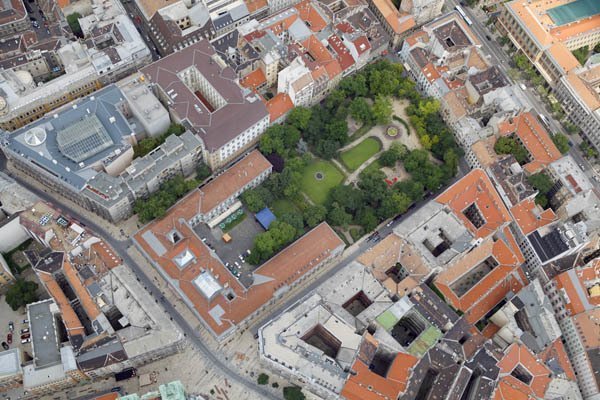 The writer of the article on index.hu has tried an alternative sightseeing tour which consisted of the gardens that can be found in Pest’s inner districts.

The writer’s secret dream that he hadn’t even known of came true when the ImagineBudapest’s workers had invited him to their thematic tour, called: Secret gardens end spaces. This group organizes alternative sightseeing tours and this is very useful because one doesn’t go in to these kinds of places, for one doesn’t know that it’s worth seeing; furthermore, residents wouldn’t let them in. The Secret garden tour was accompanied by Szekeres Júlia who shared a lot of interesting facts from which the writer selects some and writes about in his article.

The tour started in the 5th district at the Kammermayer statue, in front of the Gerlóczy cafeteria. The writer was invited to a beautifully preserved building which reflects the style of Baroque in Budapest which was a rather small city back then. The building which stands under the number 12 on Vitkovics Street was built in the 1780s when the Chain Bridge hadn’t stood yet. The street name was Sarkantyú Street because it was lived by people whose profession was to make ‘sarkantyú’ (spur). The building is in good condition and doesn’t have a big garden, only a few pot plants in the inner garden’s centre; however, in front of the house can be found Pest’s one and only grapes which are not wild. Back then a lot of houses had its own dug well and this building still has its well; even though it’s renovated and functions as a wine well. In the garden used to be a small inn, today, there’s a small store that opens to the street.

They had to go through a street which had the odor of homeless people in order to arrive to the Kossuth Lajos Street’s old luxury, where the Dreher palace is taking place. The huge palace is known as a building which was built in 1889; in 1893, the city had ordered the widening of the Kossuth Lajos Street. At this time, the city had ordered the building of the Erzsébet Bridge. All the small houses which were in the way were destroyed except for the brand new Dreher palace, even though it was 5 meters in the way. For this reason they had pushed farther in its dome with a rail system, as well as the ceiling. This building was part of the tour because in the first floor, above the gang, there is a bigger terrace where residents had made a small garden. However, the plants are also in pots and some of them are nitty but at least it exists. Manly hortensia, buxus and geranium could be seen here.

At Kecskemét Street, the pavement was being done; therefore, there was a huge dust everywhere. This was one of the reasons it was refreshing to enter one of the past’s reservations, the Paul monastery built as a seminary in the Papnevelde Street. This building is famous because the Abigél film was made here. Júlia said that Pest was this dusty in the 19th century, also, for it was built in the Danube’s river sandy property. For this reason, Szécshenyi ordered to plant trees around the city because under the trees, the air is more humid.

The old monastery had been built in the same time as the university church which was belonged to the Pauls, until Joseph II had forbidden the Hungarian religious order. In the former monastery, the visitors could see the very first beautiful garden: the priest’s seminary. There are no special flowers here but the garden’s state and the statue in the middle (used to be a well) have its calming effect. It has roses, lilies, Leander and other ordinary flowers. It used to be a herbarium, for priests also healed people. The seminary doesn’t open for public only for special occasions such as the heritage day.

The writer and his group’s next station was the Károlyi Garden. Budapest’s most beautiful and well-kept park is known for everyone but probably people don’t know a lot about it. Interestingly, this lot wasn’t built in; in the Mathias age it was operated as a wildlife park. Until 1928, a stone wall was closed it from the public as it was Károlyi Mihály family’s private Renaissance garden. After that, it was made into an English garden and it had become open for the public from dawn to dusk. When the visitors were there, the Főkert was taking care of the flower beds and the special plants. There is ginkgo tree, Lebanon cedar and a huge strawberry tree (the silkworm’s tree) and at the feet of Irányi Dániel, Rhododendrons are grown.

From the garden, the visitors had entered another familiar house, the Unger house. Here, visitors can found a book shop, an urban outfit, and home and fashion shop instead of the former vinyl shop. This romantic gateway house was designed by Ybl Miklós in 1852. The Ungers were smiths who have gained a lot of property from which they had built this fantastic house to rent. The younger generation gave up this profession, for they had lived from the rents. The house can be entered from the Magyar Street where the wall is covered with wood cubes; this was the original wall cover of the building and its purpose was noise reduction. The writer was informed that the Magyar Street was named like that by mistake because of the Ungers; and that there are so many houses with gangs because the former residents didn’t like to use the staircases; therefore, bigger houses could be on the same floor. Furthermore, the gossip could be heard from everywhere in this way.

The writer’s favourite station was the Giorgia palace which was made by the agricultural insurance company with the same name on Astoria. The house is under 4th of Rákóczi Street (huge house, the 7th bus stops here which comes from the Danube) and was designed by Barát Béla and Novák Ede. It was used to be on the news, too, for it was such a fantastic house to rent. Unfortunately, the garden’s original design could only be seen on pictures because the Bauhaus garden was rebuilt in the 50s. In the former garden, there was a huge pool only for the purpose of decoration and this gave a great visual experience as the building’s reflection could be seen in it. The 5th and 6th districts’ biggest private garden is 2000 km2 and its atmosphere is given by the trees which were not planned but grown out by the seeds that were scatter by the blackbird. There are Ailanthus (known as: wood vinegar), cherry, walnuts, hackberry trees. In the house there is a beautiful round corridor and the luxury’s evidence is that apart from the resident’s elevator, there is a guest elevator, too.

From the Synagogue to the Király street

The members of the tour was standing in front of the Synagogue at Dohány Street to talk a little bit of the ugly and harmful Ailanthus tree. These trees came from China and it is bullied as the plant’s pitbull. It has also spread around in Budapest and they cannot be exterminated; where they have started growing, no other plant will remain. According to the landscape architect, the best tree in the city is the hackberry, as it has big greenery; the Andrássy Street old trees were changed for the hackberry trees. Nowadays, another popular tree is the ash tree. The visitors stand in front of the Synagogue because lately a new garden has been installed here by New Hungary’s Innovation Plan, because of the ‘Synagogue’s gate’ project.

As they have gone through the never finished Madách walk’s massage saloon, they saw bamboo trees and they had reached the Godzsu court which used to be the Jewish quarter’s important building. It was a new fact for the writer that Godzsu Manó wasn’t Jewish; he wanted to strengthen the Roman Catholic Church which was his foundation. Jewish people were lived in the Inner Erzsébetváros because they used to be banned out from the houses inside the city’s wall. Therefore, it was close to the inner city and also, it was close to the Erzsébetváros’ market where they were selling their products. The Godzsu court was rented from a rich Roman lawyer to use it as a storage house.

The surrounding streets got their name (Akácfa, Nagydiófa, Kisdiófa, Kertész) as this part of the city used to be a garden city and the Király Street was the first lane in this multicultural city. Even in the previous decade, it used to be the center of the lively night life and trade life with pubs and cabarets. The VAM design center, for example, was the wine trading Jálics’ house with a huge basement.

The last stop of the tour was in Király Street’s starting house. The 9th Király Street used to be an Armenian trade family’s house; nowadays, French and Swiss shops are opened in the street and it has a great big garden in the backyard. This is the most renovated old house in the street, thanks to the residents’ work. The tour guide told that apart from the floods and wars, a lot of building had been ruined because they were without comfort; they had lacked the toilette and because of that, people who were too poor could only afford to live in such buildings and they didn’t have the money to renovate them. The 9th of Király Street had been in good hands: their residents had renovated it in a state as it was before.

based on article index.hu
translated by Andrea Toth