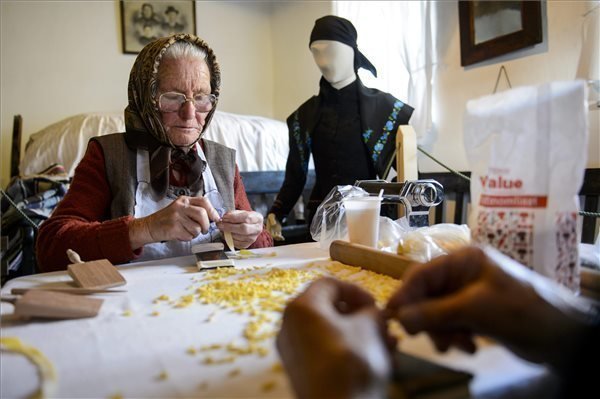 November 11th is St. Martin’s Day in Hungary (Márton nap), a traditional feast day celebrated by tasting the new wine and eating geese. The folkways are connected to several things: the end of the year and agricultural work, the coming of advent, and St. Martin’s legend that tells us about how he wanted to hide in a goose-pen so he wouldn’t be elected as a bishop, but the geese gave him away with their cackling so he was ordained as Bishop of Tours, France in 371.

According to legend the story begins with Martin, the son of a Roman tribune, who was born in the city of Savaria (Szombathely, Hungary) in the Roman province of Pannonia around 316-317. On a cold night in Amiens, France serving as a soldier for the Roman emperor, Martin saw a scantily dressed beggar and offered up half of his warm cloak so that he wouldn’t freeze to death. That night Jesus appeared in his dreams as the beggar dressed in his cloak. The dream confirmed Martin’s faith and he eventually left the army to serve god. His good deeds and his compassion and empathy for the poor became legendary and by popular demand he was appointed to be the bishop of Tours. Martin was so humbled by the news that he hid in a goose-pen as mentioned above.

St. Martin was already respected in Pannonia before the Hungarian conquest. Tradition has it that he helped St. Stephen, Hungary’s first king in his dream thus helping the whole country so he became the second patron of the country after the Blessed Virgin.

This day falls right around the time when the geese born in the spring and early summer gain their necessary weight and are ready to be slaughtered. It is also the time when the first new wines are opened after the season’s grape harvest. St. Martin’s Day traditions date back to Roman times when November 11th marked the end of the farming season and the beginning of the winter quarter in the Roman calendar. The Romans celebrated with the sacred bird of Mars, the god of war which became Martin’s bird based on etymology.

The day is the last feast-day before the 40 day Christmas fast so St. Martin’s Day is celebrated throughout Hungary with huge feasts. The feasts ensure a successful harvest and plentiful food and drink for the following year. As the saying goes “One who does not eat goose on this day, remains hungry throughout the year”. It was forbidden to do house work like cleaning up, washing or hanging up wet clothes because they believed that this lead to the death of the stock.

Predicting the weather is another tradition. “If Martin arrives on a white horse expect a mild winter. If Martin arrives on a brown horse a harsh winter can be expected.” “If on St. Martin’s Day the goose walks on ice it will be waddling in water on Christmas.” It is believed in many places that the weather on the 11th of November shows what the weather will be like in March. Autumn weather also affects the quality of wine. “The wine is judged by Saint Martin.” means that it is time to drink the new wine.

Torch-light processions are also common where the light symbolises the good works. These traditions could go on because they are a little bit different in every region.

There are plenty of events and activities held throughout Budapest and Hungary to mark the annual St. Martin’s Day celebrations. Most restaurants in Budapest and around the country offer a special St. Martin’s Day menu, so be sure to try a traditional dish like roasted goose leg with steamed red cabbage, roasted goose liver or smoked goose breast.

Find out about more programmes here: