Zalaegerszeg, May 6 (MTI) – Switzerland has become one of the ten biggest investors in Hungary recently, with nearly 300 companies employing around 30,000 people, the state secretary for economic development and regulation said in Zalaegerszeg, in western Hungary, on Saturday.

Speaking at the opening of the new production hall of EuropTec, a Swiss company manufacturing primarily plastic parts for medical instruments, implants and tools, István Lepsényi said that the new, 1600 sqm facility was expected to double production and employ a further 65 workers. The company invested 710 million forints (EUR 2.3m) in the facility, he said.

The investment is a manifestation of the trust inspired by Hungary’s stable economic policy, Lepsényi said. GDP is expected to grow by about 4 percent in 2017. Industrial production grew by 10 percent in March only and by 7.5 percent in the first quarter of the year, he said.

Swiss Ambassador Peter Burkhard said that the investment project is an important sign of thriving relationships between the two countries. Investors’ trust is demonstrated by several upgrades in Hungary, he said. 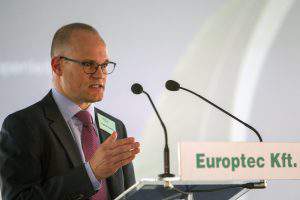 Fabian Zwick, board member of Swiss EuropTec owner Glas Troesch, said that the corporation manufactures primarily glass and plastic parts for the automotive and medical industries. Glas Troesch employs a total of 5,000 people in Europe, the USA and the Middle East, he said.

Its Hungarian unit will have 195 employees with the new facility going online.

The municipality of Zalaegerszeg supported the investment by widening the access road, Mayor Zoltán Balaicz said.