The Legendary Petőfi Hall Is Being Reconstructed And Eventually Demolished

Petőfi Hall was thought to be important by many people but it wasn’t appreciated enough. It was sponsored by the state last year, and despite being full of workers nowadays, Petőfi Hall is going to be demolished.

In the beginning it was not only intended to be a concert hall, rather a leisure centre for the young with skater clubs, teen parties, and movie fan clubs. There was also an opportunity for joggers to take a shower in Petőfi Hall –noted Juvenile Magazine back in the days of its opening.

At first it gave place to the aviation history collection of the Transport Museum next to being a popular music centre, too. Compromises had to be made at its reconstruction, for which Judit Tihanyi and György Halmos architects received an Ybl Prize in 1990. The ceiling height was reduced because of the smaller rooms of the juvenile centre –states Hg. It also mentions that the feedback on the building was more positive back in the days of its construction as a list of professional western magazines made reports about it. 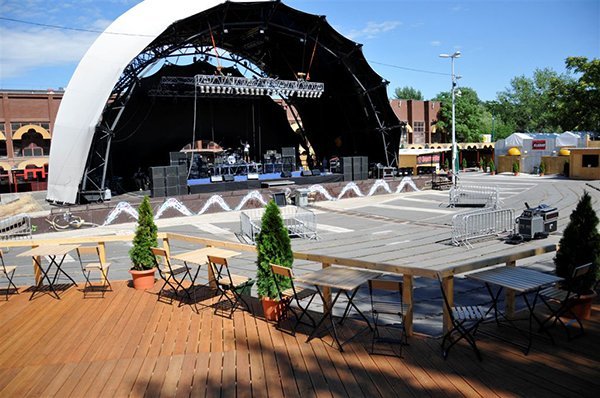 Small clubs were no longer suitable for a high number of Hungarian new wave followers in the mid 80’s, then the party and techno culture became mainstream in the mid 90’s and in the last third of it. The crowd from that time on was too big for the regularly held, often illegal open-air events, and Petőfi Hall was the only building which could house so many people.

However, it is mainly a destination for rock lovers even to this day. Pokolgép will hold its jubilee concert here in June; Hungarica, Romantikus erőszak and Örökség will all perform in March during an event labelled with the motto „Hazádnak rendületlenül”. The Dutch symphonic metal band, Within Temptation will also come to Petőfi Hall in spring.

Articles connected to the possible demolition of the building first appeared in 2011 but it was only announced officially 2 weeks ago.

There will be a meadow in its place. Cortina Service, the operator of Petőfi Hall refused to comment on its reconstruction and demolition.

based on article of origo.hu