The story of Santa Claus’s dreadful sidekick – the Krampus

Advent’s first day is already behind our back and the countdown until the Holy Night began. But before that, the day of Santa Claus (6th December) is the second most significant day, after Advent’s first Sunday, when we are waiting for our beloved Santa in his red cloak and with his enormous white beard. In many countries, including Hungary, Santa Claus does not visit the children alone, but with his sidekick, Krampus, whose duty is to give children with bad behaviour a “virgács” (birch sticks, funnily implying beating) as a sign of punishment. But the role of the Krampus was much different in the past.

The tradition of Santa Claus became well known in the 11th century, but he was paired up with Krampus only in the 17th century. Historians did still not find enough source on how Krampus became the sidekick of the good-hearted Santa Claus. Also, the origin of Krampus is hard to determine, but historians believe that its roots are in Christian and folklore traditions. According to Central European customs, Krampus is a horned, ungulate, black furred anthropomorphic figure described as “half-goat, half demon” who punishes children who have misbehaved. Its name comes from the German word Krampen, which means claw. Some say that Krampus is the replica of Odin, who is a god in Germanic mythology.

According to the tradition, Krampus’ original task was to take bad behaved children to the underworld. It also carried an iron chain (which symbolizes the captivity of evils) and a big bunch of ‘virgács’, not the small golden ones, but big ones which could cause real pain if he used it. Sometimes, there were also bells on his chain.

Krampus was a horned, dark-furred or black demonic creature with enormous tusks and a big pointed tongue. He accompanied Santa Claus and walked with him from door to door, although there are some cases when he visited children alone. While walking on the street from one house to the other he frightened children by shaking his chain. Christian religion believes that the body of Krampus consisted of dead souls, which made him equal with the devil itself.

Children in Styria (Austria) were in the worst situation, because not only Krampus visited them on the 6th of December, but he was often accompanied by his evil and frightening fellows. Santa Claus did not visit children in this case. These evil fellows were described as Schabmänner or Rauhen in German.

In Styria and some parts of Germany, even postcards (Krampuskarten) were made, which showcased the moment when Krampus took away a badly-behaved child in his bag to the underworld. These images were extremely terrifying. On the back of every postcard, a short poem can be read. Krampuskarten are still made today, but they are less frightening then they used to be. They usually feature friendly caricatures of Krampuses. 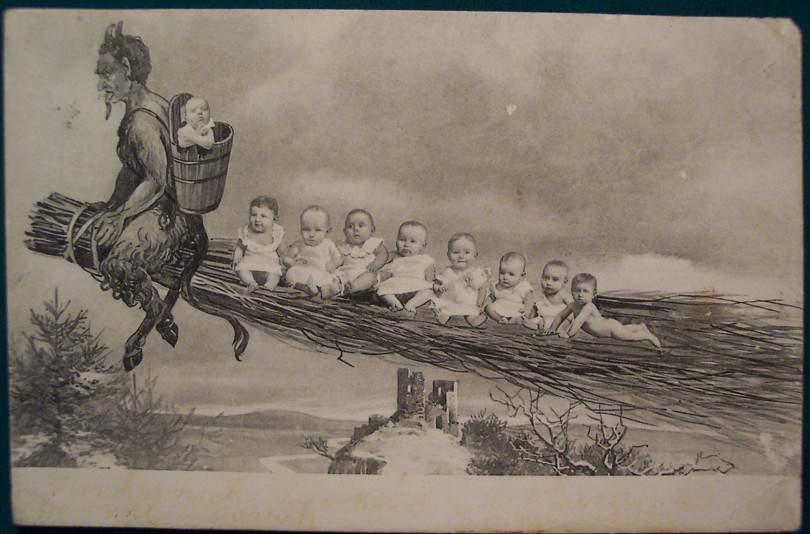 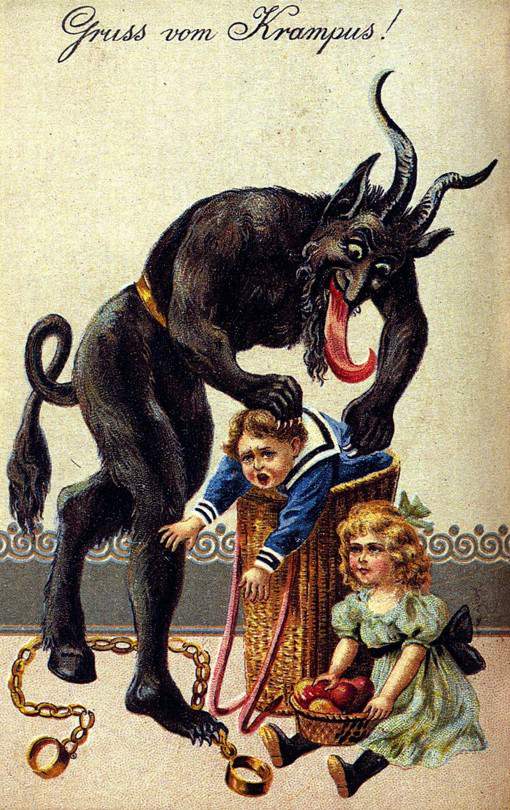 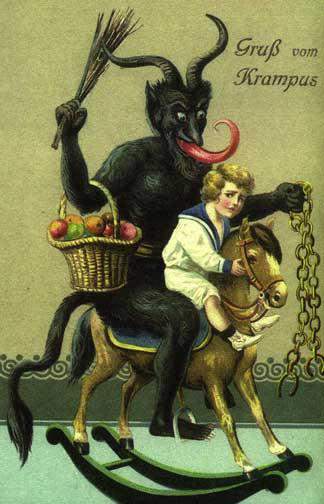 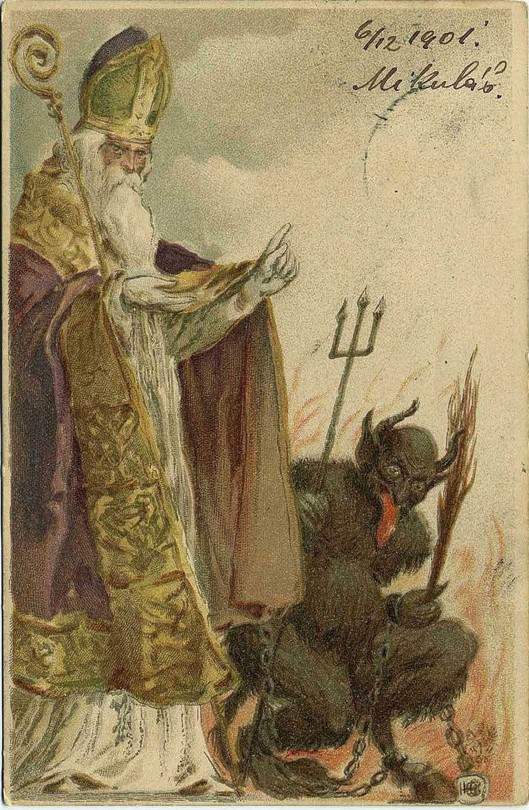 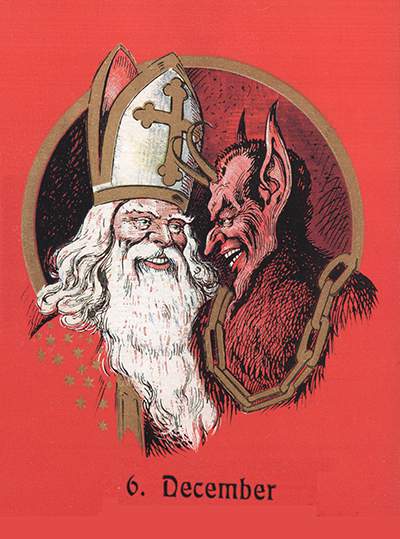 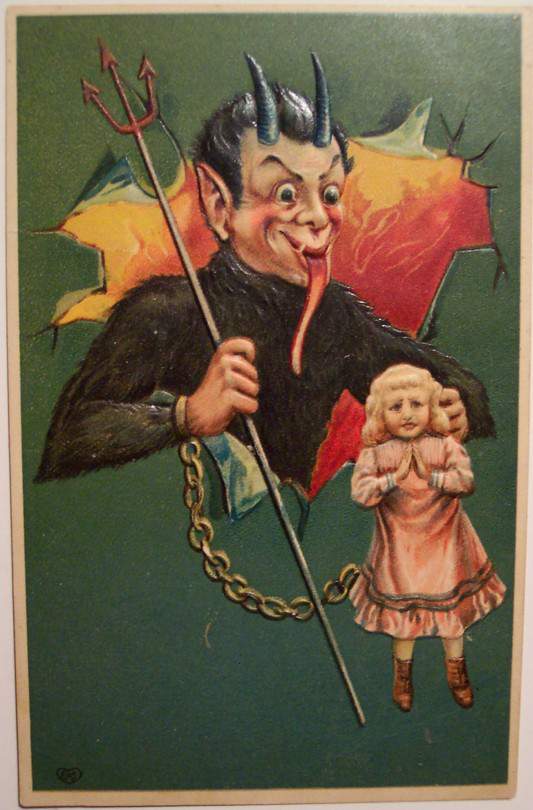 In Germany, there are written documents from the 16th century that describe these horned demonic creatures as they appear from their hidden place on the dawn of 6th December. No wonder that the tradition of Krampuses comes from German countries, especially from Austria. The other European countries took the tradition of Krampus from these countries. There is, however, a slight difference: it is Santa Claus who is always accompanied by Krampus, and while he only deals with the well-behaved children, his sidekick deals with the bad-behaved children.

In Austria, especially in the Alpine region, Krampusnacht (Krampus’ night) is still a living tradition, which recreates the night (in Austria 5th December) when these demonic creatures appear on the streets and visit children alone or accompanied by Santa. On this night, in little villages and towns, residents dress up in traditional Krampus costumes and walk together on the streets.

Santa Claus is accompanied by Krampus in many European countries, including Hungary. Although their evil and frightening past is not emphasized anymore, and they do not take badly-behaved children to the underworld. Still, the lightened story of Krampus is still an effective method for parents to warn their children that, if they going to behave badly, they only going to get a ‘virgács’ from him, instead of the presents from Santa. 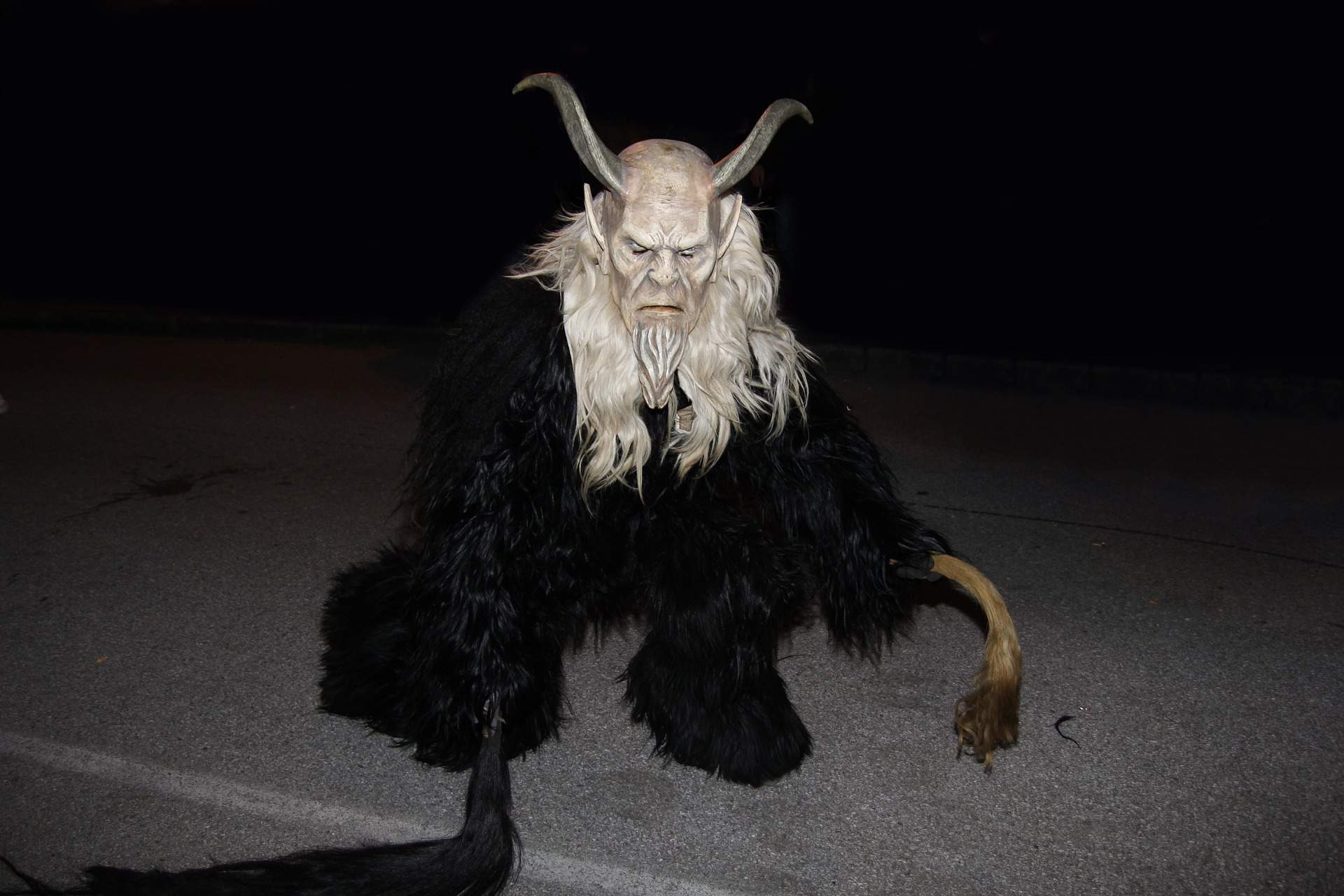