Thousands of colours on the firewalls and stairs

The mood of the Hungarian cities is not only defined by its main attractions but by the works of street artists, too. They appear in the most surprising places of the cities, for example, on the firewalls or stairs, some appearing only to be nice decorations making the city attractive, some have even deeper meaning.

Budapest is still keeping the memories of the past boisterous decades. There are many buildings which are badly in need of a renovation, and the lot of empty building sites do not improve the image. Since 2011, many walls have been decorated as part of the so called TűzfalRehab program and the Colorful City Festival Budapest turned the least beautiful part of the city into a colossal canvas. The idea of the movement comes from the painter Victor Vasarely. The members of the program have already turned more than 20,000 square metres of wall into works of art since 2008.

Among others, one of the ugly walls of Nagy Diófa Street got a mural in October 2016. With the participation of Hungarian, Polish, British, Spanish, French and Russian artists altogether 1800 square meters  of wall were decorated in the city and nearly 2500 litres of paint was used. On 13 October a painting got to one of the walls of Dob street: the picture is in memory of Ángel Sanz Briz, Spanish diplomat, who saved the lives of thousands of people, made by the Spanish graffiti artist Okuda San Miguel.  The 6×6 metre picture is part of the “Wallpainting for Freedom” project, which aims to commemorate the Spanish diplomats who saved thousands of Jews during World War ll.

Within the project not only the firewalls but the bridgeheads – not showing a nice image up to now – are also being decorated.  There are already colourful paintings on the Buda side of the Rákóczi and the Elizabeth bridges.

On occasion of the commemoration of 23 October, the famous front page of Time from January 1957 about the Hungarian revolutionists got painted on the wall in the Wesselényi Street. Time chose the Hungarian freedom fighter on the picture as the “Man of the Year” at the time. 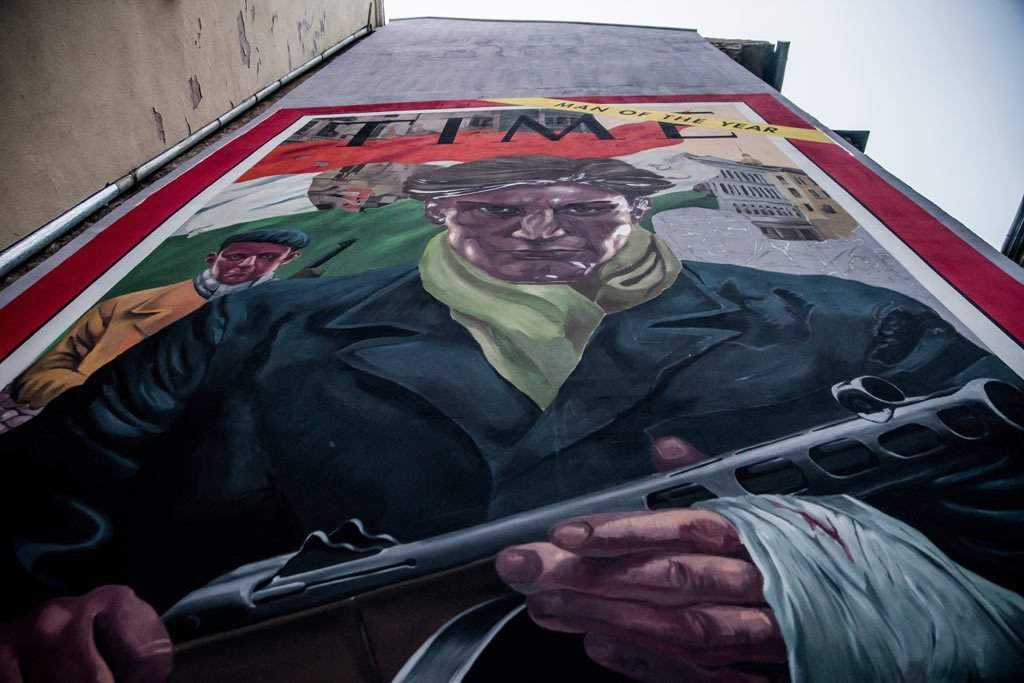 Paintings under our feet

There are not only firewalls turned into 3D paintings by street-art artists, but stairs too. The “Halas lépcső” (Fish stairs) is the newest attraction of Tapolca, which is inspired by the stairs in Valparaiso, Chile. The stairs leading to the Malom-tó (Mill Pond) was made by the local industrial artist, Judit Varjas. It was being made for 17 days, and has the carp as the main motive, which can be found swimming in the lake, too.