Traditional Hungarian holiday feasts and customs from Advent to Epiphany

Religious holidays have a special ambiance, the traditions, the meals and the menu of each celebration is different. The rich and delicious dishes served on the table add to the light of the festive mood. For those who are interested in Hungarian traditions and meals, magyarvagyok.com summarized the most important practices, customs and beliefs connected to the upcoming holidays. 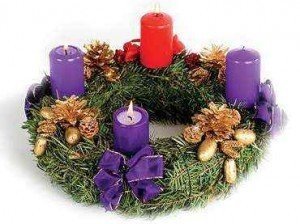 The religious year starts with advent in Hungary, which starts on St Andrew’s day (the 30th of November) and lasts until Christmas Eve. This time of the year symbolizes the waiting for the arrival, and in some places of the Hungarian country, families kept the tradition of carrying the picture of the Holy family from house to house, and celebrating with devoutness for nine days. This tradition is called ‘The Holy Family looking for shelter’. The advent wreath and the tradition of caroling (‘betlehemezés’ meaning doing the Betlehem is the Hungarian equivalent of caroling) are also connected to advent. In the days preceding Christmas, Hungarian families traditionally eat moderately, while on Christmas the menu is usually heavy and rich in meat, says magyarvagyok.com.

The fasting of Advent ends on Christmas Eve, and although canonically this day is not marked as a fasting-day, Hungarian families celebrate this day with meat-free dishes such as bread pudding with poppy seed (known as ’mákos guba’ in Hungarian), bean soup, pasta with poppy seed and egg soup.

On Christmas, we celebrate the birth of Jesus, this holiday is known as the celebration of love. Most families stick to the traditional menu, which consists of fish soup, wine soup or fried fish. The rest of the menu is variable, the customs are different in each family, but the most common dishes are roasted turkey and stuffed cabbage.

Like in many other countries, the Christmas tree is an essential decoration of the house in Hungary as well. Apart from this ornate component of the decoration, the dining table had been the most important place in the Christmas tradition of Hungary. The colour of the tablecloth retained its role in representing the spirit of the holiday: most families have a special, decorated tablecloth that they use on Christmas. It is usually red coloured, which signifies happiness. Poppy seed, beans and peas also have traditional significance: they symbolize affluence and fertility, while honey is said to make life sweeter.

On first day of Christmas (the 25th of December), lunch starts with a rich, gold-coloured soup which may be chicken soup, turkey or can be made of giblets as well. Vegetables, mushrooms, liver and pasta makes the soup rich and tasty, fitting the splendour of Christmas Day. The main dish is usually roasted turkey, in many places it is served with chestnut, almond and plum braised in red wine. In the countryside, this time of the year is the harvesting of the fattened pigs, known as ‘disznóvágás’ (translates to pig killing), so the Christmas menu is completed with pork dishes. 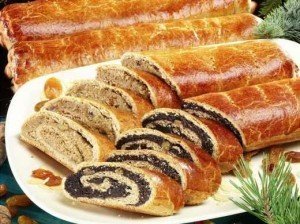 The desserts served at the Christmas table are favourites of many: the sweet pastry stuffed with poppy seed or nuts, or ‘bejgli’ as Hungarians call it is made with batter or short pastry. The stuffing can be enriched with raisins, apple, chocolate or honey. This is the most popular Christmas pastry in Hungary, but there are other desserts served on this day: Gerbeaud slice is a rich, delicious dessert made of batter pastry, with apricot jam and nuts filling and chocolate glaze on the top.

The Day of New Year’s Eve (the 31th of December) is the last day of the year, when people celebrate the end of the year with rejoicement and remercies, writes magyarvagyok.com.

Traditional Hungarian cuisine celebrates New Year’s Eve – the day of Sylvester, as Hungarians call it – with rabbit, fish, venison or poultry, because the rabbit and the roe run away, the fish swims away and the poultry flies away with the worries of the previous year. The menu also features a rich soup that is said to cure hangover, called Souse’s soup (‘korhely leves’ in Hungarian). Just like on Christmas Day, Hungarians eat stuffed cabbage on New Year’s Eve as well.

The traditional beverage of this season is Krampampuli, made of rum, orange, dried plum, tropical fruits and sugar, flavoured with cinnamon, clove and lemon. This sweet-scented mixture is heated up and blended with white wine, tea and juice of orange.

All the deeds one does on New Year’s Day (the 1st of January) will take effect on the whole New Year according to the tradition. In olden times, in the Hungarian countryside people used to wake up earlier, in order to be productive throughout the whole year and they used to wash their faces in the cold water of the well, so that they would keep their liveliness in the coming year. Farmers would threaten their fruit trees, as the custom said, this way they will bring more fruits and the hens were fed from tyres, to lay more eggs.

The ingredients of the classic menu, according to magyarvagyok.com, were soup made of pork giblets, sourish cabbage-soup that cures the hangover and lentil soup, which is said to bring wealth to the family. Roasted pork is also served on New Year’s Day, the crispy, red-coloured and tasty pork meat is a widely-known and popular dish of Hungary. As the pig symbolizes fortune, families make pork meals of a great variety on this day: you might find pork stew on the table of many Hungarian families.

‘Csörögefánk’ is a type of donut Hungarians eat on New Year’s Day. Unlike its American relatives, this donut is not round and does not taste like them either, this pastry is folded like a bow before frying, therefore it looks like angel wings. Just like the donuts served at carnival, ‘csörögefánk’ is also best with apricot jam.

Epiphany is a Christian festival, observed on the 6th of January. The subject of the celebration is the adoration of Christ, Christians celebrate the visit of the Wise Men to the infant Jesus. The carnival season starts with this day.

In Hungary, people have their homes and kennels consecrated with holy water on Epiphany Day, as this is the time when water is sanctified in Catholic churches.

based on article of magyarvagyok.com
translated by Laura Kocsis