Budapest (MTI) – International investors most prize transparent regulations and predictability, the US ambassador in Budapest said on Wednesday.

Colleen Bell told a business forum of the American Chamber of Commerce that any company investing abroad wants to be sure that regulations cannot be arbitrarily changed overnight. When a company picks the location for an investment, it generally chooses a country where regulations are most transparent, she noted.

Speaking about the TTIP free trade agreement under negotiation by the European Union and the US, Bell said it was a “misunderstanding” that such a deal would work only to the advantage of the US. She added that the biggest misunderstanding in the Hungarian press was that the agreement would require Hungary to amend the clause in its constitution that keeps local farms GMO-free. The US honours Hungary’s stand and the constitution on this matter, she explained.

She said economic ties between Hungary and the US are “very significant”, adding that strengthening these ties was a joint goal.

Also speaking at the forum, Hungary’s new ambassador to the US said there is a good opportunity “to open a new chapter” in Hungarian-US relations at the start of this year, and this could benefit both countries. 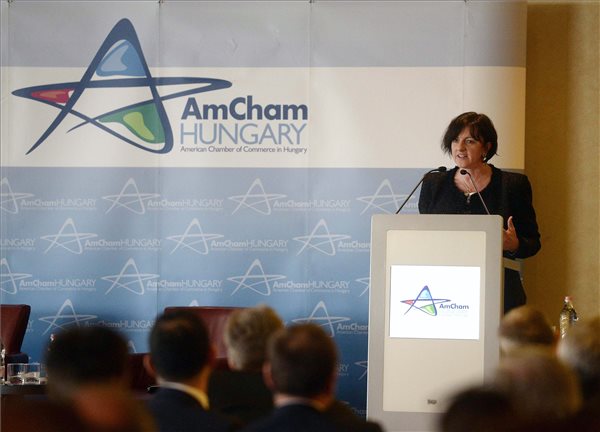 Reka Szemerkényi said that dialogue between Hungary and the US is more important than ever, and Hungary is determined to strengthen cooperation between the two countries in every area. She also confirmed Hungary’s “unchanged” trans-Atlantic commitment, and said that the government’s policy of eastern opening is “no alternative to relations with the West”.

On the subject of the EU-US free trade agreement, Szemerkényi said it was a “unique opportunity”, and voiced Hungary’s support for the negotiations. The agreement could strengthen Europe-US ties, and promote mutual interests, she said.

Szemerkényi said she would occupy her post in Washington this week, and expects to present her credentials to US President Barack Obama on February 23.