Budapest, July 7 (MTI) – The government has made several decisions concerning development projects in Budapest, government office chief János Lázár told his regular weekly press conference on Thursday.  Hungary refuses to enter into any compromise that would hamper the country’s security, he said. The government will seek parliament’s approval on how to spend revenue flowing in from the sale of state farmland, Lázár said on Thursday.

It has approved a plan to renovate the National Széchenyi Library’s main building in the Buda Castle. A tender will be called for the designs of the project, which includes building a new warehouse in Piliscsaba, north of Budapest, he said.

The Hungarian National Museum will be offered access to use several buildings of the Palace quarter, the area behind the museum’s current location on Museum boulevard in the 8th district. In the areas between the national museum and these buildings, green spaces will be restored and expanded, he added.

The Hungarian State Opera House’s main building on Andrassy boulevard will be renovated with a budget of 25 billion forints (EUR 79m).

Further, the Science Museum will be housed in a new central building, Lázár said.

On the subject of the contested City Park (Városliget) project, which is facing protests by environmentalists, Lázár underlined that the proportion of green areas in the park would rise from the current 60 to 65-70 percent. He said protests are allowed within the framework of the law. 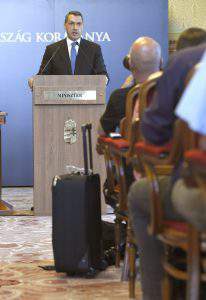 Hungary will not compromise on security

Hungary will not allow anyone to cross its border unchecked, Lázár said, insisting that the country must protect its right to decide who it wants to allow in. This is why it was necessary to amend the country’s border regulations, he said, referring to new rules that entered into force on Tuesday.

The government office chief said it was unfair of European politicians and international organisations to call into question Hungary’s solidarity and criticise its laws.

“What could be a greater show of solidarity than Hungary protecting Europe’s borders — largely with its own funds — and stopping people who try to enter unchecked without documents?” Lázár said.

Regarding the recent dispute between Hungary and Austria on reinstating border checks, Lázár said Hungary’s interests lie in resolving its disputes and deepening ties with its western neighbour. Hungary is constantly in contact with Austrian border authorities, he said, insisting that Hungary “is not doing anything to hamper” bilateral cooperation.

Lázár said Prime Minister Viktor Orbán had invited Austrian Chancellor Christian Kern for talks in Budapest and the chancellor is expected to oblige within the next few weeks.

On the subject of the NATO conference starting (in Warsaw) on Friday, Lázár said the government is well-prepared. Two years ago NATO decided to raise defence spending significantly, and to comply, Hungary has raised its own spending by 20 percent since 2010. Although this is still far from NATO’s requirement, it is a first step to strengthening Hungary’s defence forces, he said.

Socialist Party lawmaker Tamás Harangozó reacted to Lázár’s statement about defence spending, insisting that far from growing, the defence budget had shrunk to a historical low, “this year hardly reaching 1 percent of GDP”. He added that whereas defence spending was about to increase, this would barely compensate for previous reductions.

Meanwhile, asked to comment on the possibility of a Hunxit after Brexit, Lázár said he could only underline his personal view that he could not “wholeheartedly” support Hungary remaining in the EU. He said he was pessimistic about the possibility of renewing the current EU institutional system and he said Europe should not be confused with the European Commission or the European Union. What was happening in those institutions did not serve the interests of Europe, and it is the fault of the commission that one of the most important member states is now leaving, he added. The way the commission and the EU operates today does not appeal to ordinary people, he said, adding that this was not the government’s official position but his personal one as a Fidesz politician.

Addressing developments concerning the Paks nuclear upgrade project, Lázár said European Commission procedures and talks between the government and the EU were drawing to an close, “which hopefully means that things are coming to a conclusion”.

In response to a question about plans for a new reception centre in Kiskunhalas, in southern Hungary, Lázár said the government had not yet come to a decision, but all plans would be discussed with the town’s leaders. He said recent government measures, such as the 8km “deep border control” and the transfer of migrants to a transit zone, would reduce migration pressure on Hungary and there would not be any need for a new reception centre. “The government is on the side of closing it down,” he said.

Addressing his regular weekly press conference, Lázár said a bill has been tabled to address this issue and a report will also be filed to parliament regarding an itemised list of purchases.

The farmland programme ending on July 31 has so far attracted 40,000 farmers, and 30,000 have bought land of less than 3 hectares each. State revenue from the auctions is expected to come in at around 270 billion forints (EUR 853m), he added.

Lázár also announced plans to organise the government’s work around two government cabinets: an economic and a strategic cabinet. He said both would be headed by a minister and they would have both decision-making powers and preparatory tasks. Prime Minister Viktor Orban will assign them the relevant policy areas, Lázár said. The reason for this move is to allow enough time to prepare decisions thoroughly by including consultations and promoting more effective governance, Lázár said.