Why Bullish, And Why Centipede Bridge? – 10 Mysterious Places In Budapest

Where is Centipede bridge? What is the Filatori dam named after? Where did the Ostapenko statue go? What is common in Helicopter housing estate and in flying? We walk by these places every day, still we don’t know why are they named this way. The ten weirdest named places, collected by hvg.hu, are listed below. 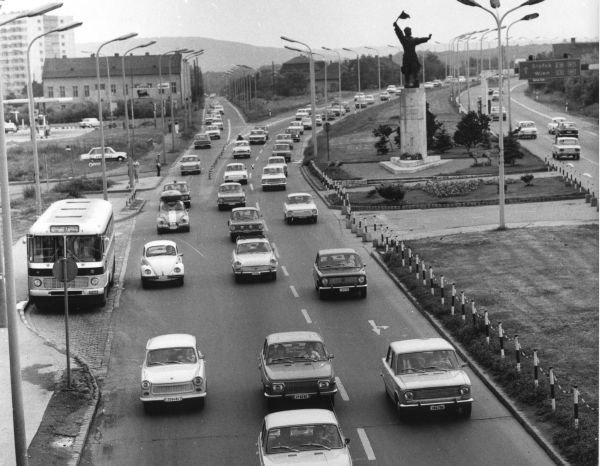 Most younger people raise their eyebrows when they hear the expression “Ostapenko”. Those who think that it is some kind of extinct punk band or a postmodern painter are wrong, cause Ostapenko signs the access road section of M7 highway. During the previous government system, in the absence of another pageant, the place was named after Ostapenko captain’s huge sculpture which was the sentinel of Budaörsi road from 1951 until 1991, when together with his other comrades it lead up in the neighboring Sculpture Park. But this monument, which became a symbol over time, didn’t fall into oblivion. Later the newly-built McDonald’s nearby got the official name Ostapenko, as Fent és Lent blog says.

The eponym of the sculpture, Ilja Ostapenko was a captain in the Soviet army. He got a mandate in 1944 to deliver an ultimatum to the leadership of the German army, which called the Nazi leaders to surrender. The captain managed to hand the message to the headquarters. However, the German general Pfeffer-Wildenbruch got the command from Hitler to defend the city even at the cost of his life. Ostapenko left back to the Soviet camp holding white flag, but despite the sign, marksmen shot him to death. Different opinions exist about where did the shots came from, some insisted that the Germans fired, others that the Soviets did. Anyhow, the incident was a good pretense for the Soviets to create a heroic victim of Ostapenko. The officer who was in charge on the German side was sent to concentration camp for 25 years. However, after the downfall of the communist system, he was declared innocent by the Russian Federation’s council of annulment cases. 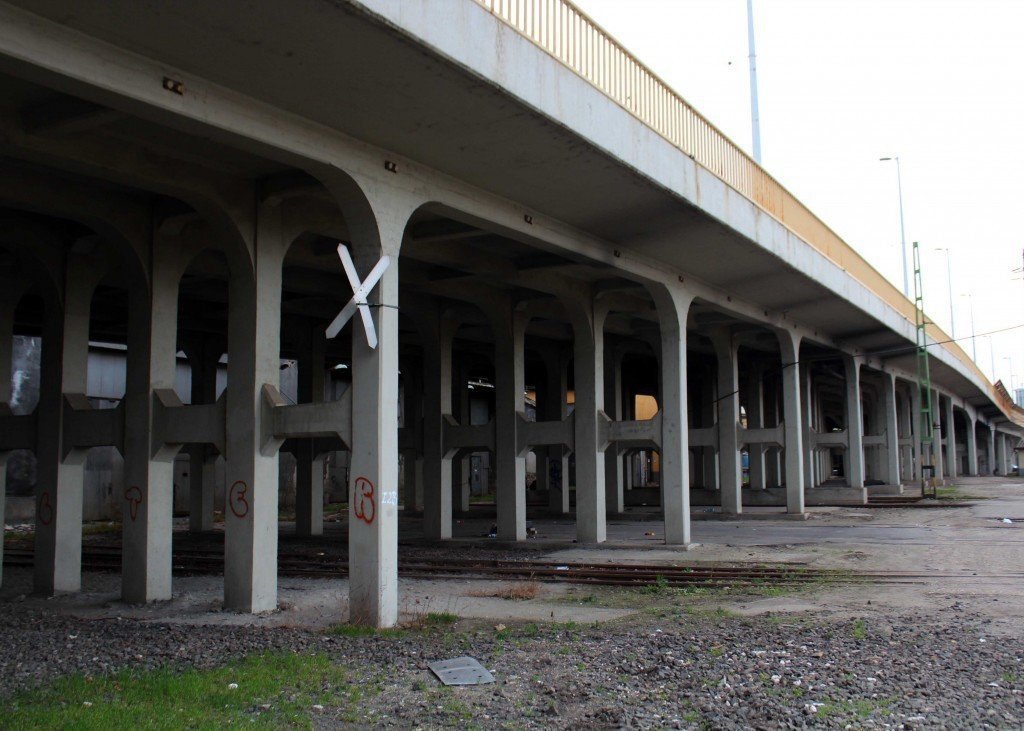 Many people have no idea about the fact that the bridge which they cross day by day, or boil over its gumming is named the Centipede bridge. The flyover leads the Kerepesi road’s traffic over the Keleti train station’s entrance tracks. The overpass got its nickname “centipede” from the railwaymen for the reason that its plinth is of many slender columns instead of a massive pillar. The bridge was rebuilt last in 1973, that’s when it gained its current form. During the past 40 years its structure degraded, so in last October the city management determined to renew it – reported Index in last November.

When jolting on the tram 47, sometimes a rasping voice says: “This tram runs to Albertfalva kitérő”. Those who take notice to the sound at all acknowledge satisfied that everything is all right, the tram reaches its terminus that day as well.

But what is Albertfalva (Albert’s village), and why do we have to bypass there? In the XI. district, instead of the block of flats on the corner of the Fehérvári road and the Andor road, there stood once a Roman fortress. The area was later also inhabited, and at last it became an independent village in 1820. Its first name was Lerchenfeld (Skylarkland, Pacsirtaföld), because it was located in Skylark-lane (Pacsirta-dűlő). After parceling the area it was named Theresienfield (Theresaland, Terézföld) in honor of Empress Marie Theresa, later Sachsenfeld (Saxonland, Szászföld) after the immigration of the saxons, then Albertdorf (Albertvillage, Albertfalu) in memory of the former proprietor, prince Albert. At last it became Albertfalva (Albert’s village) in 1822. The capital city later annexed the little village, it is part of Budapest since the 1st of January, 1950. The village houses quickly disappeared, huge blocks of flats replaced them. Now only the tram terminus preserves the memory of the onetime independent settlement. 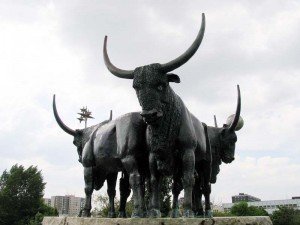 Soon the now unknown Bullish park will burst into the public consciousness, because it will be the eponym of one of Metroline 4’s stations, which is promised to start off in March. Otherwise, the green area is one of the biggest public park in South-Buda, and it was named of its bull statues made by Kiss István in 1980. The park located in Kelenföld residential estate has been slightly broken down over time, the statues have been painted with graffities, but still many people from the district visit the park with pleasure. In hope of the growing attendance in the future caused by Metroline 4, the XI. district’s council started to renew the 8 hectar green area last summer. The reconstruction worth HUF 500 million is expected to be ready by 2015. According to the promises, “community function” will prevail during the restoration: family and other community events will get place, and free sports fields will be evolved, accessible for every age group. 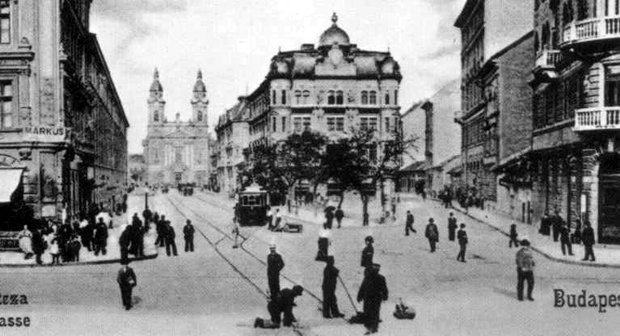 Many people were surprised when the VIII. district’s council from one day to another simply renamed the Baross street’s 4-6 tram stop to Thirty-twoes’ square in 2011. But the square bears this name for a long time: it was named in memory of the 1st World War’s heroic victims of 32th Infantry Regiment. Even a sculpture was set on May 14th, 1933 in honor of the heroes, financed by public donations.

The 32th Infantry Regiment was established by Empress Maria Theresa, its base was Pest, later Budapest, and it was stationed at the Kilián barrack located on the corner of the Üllői road and the Ferenc boulevard. The regiment suffered serious losses during the 1st World War, then it had to be disbanded in accordance of a clause of the Trianon contract. The formation was reorganized during the 2nd World War, its commander was major Maléter Pál. After the regime change, the regiment got the number 32 again, and it ceased finally in 2007 as part of the military reform. 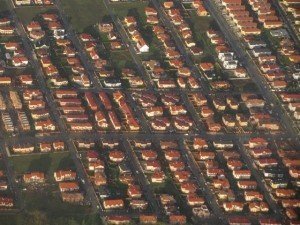 When hearing the name Helicopter housing estate, some people automatically start to fantasize about helicopters or airplanes stationing there. But these daydreamers will be disappointed when visiting the place – no signs of an airstrip, the place is just a suburban housing estate with some boring newly built houses.

The housing estate located in the XVII. district, Rákoshegy was presumably got this name because of the proximity of Liszt Ferenc Airport, and the adjacent streets which also have airplane-like names – there are streets like Csillagmotor (Starmotor) and Légcsavar (Propeller) alley nearby. Further reason of the appellation is that the prehistory of Hungarian aviation took place just a few kilometers away in the area between Fehér road – Kerepesi road – Keresztúri road, the former Rákos-mező (Rákos field). 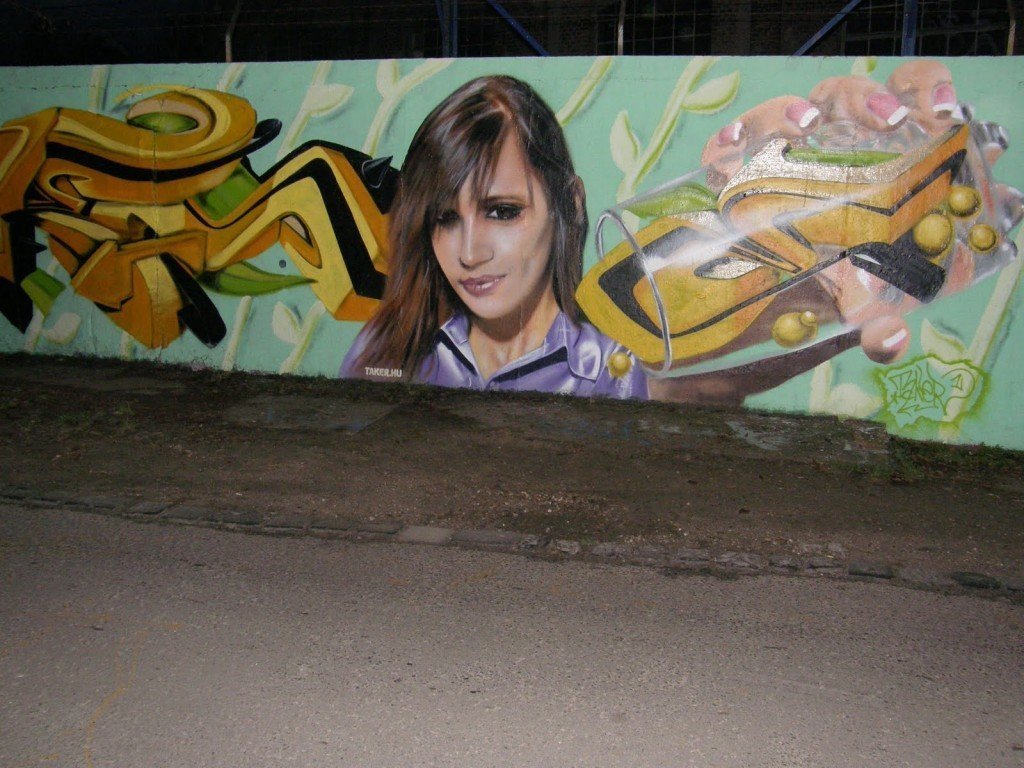 Every year, hundreds of thousands tourists pass through Filatori dam suburban railway station heading to Sziget festival, but even most of the people living in Budapest don’t know the origin of the station’s name. It got its strange-sounding name from the silk-reel factory founded in 1780, which had the latin name “Filatórium”. Although the manufactory went bust in 1789, the area was later mentioned as “Filatori Felden” (Filatori Fields) in German.

Otherwise the Filatori dam is very popular among Hungarian street art groups, because one of the walls on which graffiti-painting is legal is near to the station.

The reason of the appellation is that Hungarian gypsies made gypsy music and also Hungary world-renowned. It is believed that if gypsy music has a cradle, then it has to be Józsefváros.

(Note: egérút – comic expression for “escape route” or “vantage” in Hungarian language)
The witty name illustrates the function of the road section very well, since it was made for exoneration. The more than two kilometers long service road was built with the purpose to connect the bigger road networks surrounding Budapest, and to reduce traffic jams in the city. The new road section is integrally connected to the highways M1 and M7 leading to Buda, and to the 1st and 7th main roads, the Lágymányosi bridge, the Hungária boulevard, and several routes of the XI. district. The Mouse road renewed in 2010 also serves as the spine of the XI. district’s East-West road network.

The numbered streets of Budapest

Despite the fact that the Budapest councils spent millions of Hungarian Forints to rename public places in the last few years (Óbuda spent more than 8 and a half million), there are still many streets in Budapest which don’t have a name at all. In the XVII. district there is an area consists of 20 streets, where every street’s name is a number bigger than 500. For instance, the square located in the middle of the area bears the name 525 square.

“These public places probably didn’t get an exact name because of laziness, street names have lesser importance in suburban areas anyway. Besides, none of the mayors will have troubles with numbers.” said Kocsis János urban sociologist to hvg.hu. “In some foreign cities, like New York, boulevards and avenues are indicated with numbers, but it has practical reasons there – the city is more transparent this way, and the streets are easier to remember” he added.