Africa Day was celebrated in Budapest

In Addis Ababa in 1963 – at the summit of the Organisation of African Unity (OAU) – countries of the new-born continent decided to celebrate Africa on 25 May every year. The organization’s successor, the African Union, aims to strengthen the relationship and solidarity between the African countries. The Africa Day was also celebrated at the InterContinental Budapest, globoport.hu writes.

to like-minded people, ambassadors, and businessman. The Africa Day at the InterContinental Budapest was organized by the embassies and the African-Hungarian Union. Lizeth Satumbo Pena, ambassador to Angola welcomed guests and said that the Africa Day is an important date, and she’s happy that Hungary is also celebrating.

President of the African-Hungarian Union Sándor Balogh emphasized the importance of the cultural, economic and business partnership between Africa and Hungary, and said that the African-Hungarian Union and Hungary are closely working together  to change how people view Africa as a continent. The president also emphasized that Africa is receiving more and more tourists and businessmen every year, and that “Africa is the future.”  Balogh quoted an African phrase and said “If you want to go fast, go alone. If you want to go far, go together.” 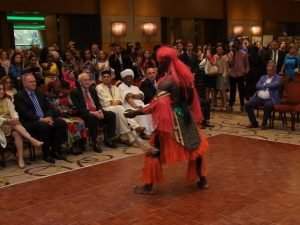 The Ministry of Foreign Affairs and Trade’s Parliamentary State Secretary, László Szabó, said that the Africa Day is important because it’s another opportunity to strengthen the relationship between Africa and Hungary. Although many people still think that Africa is of the poorest continent in the world, it has great potential. The secretary of state also said that he hopes this relationship can be strengthened even further.

Guests could also enjoy great music that was provided by the Kizomba Dance Group and the Crazy Girls, who performed Angolan dances, and members of the Csillagszemű dance group performed traditional Hungarian dances. There was also an African fashion show, and the clothes combined elements of the European and African fashion.  Abdoul Kamara fascinated people with his Senegalese dance, and the African Melody Band performed a Nigerian dance show.

Many people won valuable prizes by participating in the tombola such as a Toyota watch, a week long Tunisian holiday, and subscription to the Tropical Magazine. Hundreds of people were interested in the 2016 Africa Day, which is a great indication of the strong relationship between Hungary and Africa.