According to independent.co.uk, thousands of people protested against refugees and migrants in Eastern Europe, most of them in Warsaw, Poland.

In the Polish capital, around 10 thousand people participated in a rally chanting “Today refugees, tomorrow terrorists!” 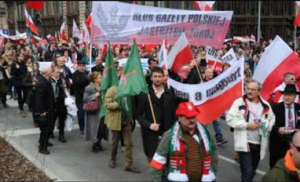 The protestors stood up for Hungary and waved Hungarian flags.. In the banner, it is written that Hungarians are brave.

However, some people on social media accused the protestors of hypocrisy, because more than two million Poles live and work in Western Europe, express.co.uk wrote.

based on the article of independent.co.uk
edited by BA

In 2016, everyone had the possibility to send in their vision about a...

Seven patients have died in the past 24 hours, all of them elderly and suffering from…