Hungarian ruin bars have been in the limelight for a few years now, foreigners seem to love them. They’ve also been appraised by several foreign magazines and now, the famous The Times travel site also picked their favourite ruin bars and put them into a great article.

The article starts off with a historic flashback: the culture of these unique places emerged in the 1990s when one ruin bar was opened right after another in District VII in sleazy, out of use buildings, where people could drink, smoke and talk politics. “Today, that spirit lives on, with new contenders springing up all the time alongside the established classics.”

Starting with Instant, which was designed in a onetime apartment building, they emphasize the “calmer areas” and the interior design perked up with forest animals.

“Head upstairs to find the smaller, calmer areas (one still has an original bathroom on display), or join the happy throng below in the “enchanted forest”, drinking a local beer, Dreher, surrounded by sculptures of rabbits, winged owls and that boar-shaped disco ball.” 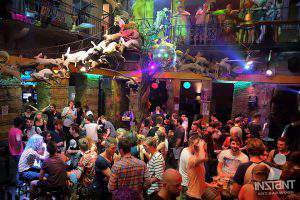 The article calls Mazel Tov one of the brightest and most stylish places in the city, where the staff is very kind and you can choose from 17 different pálinkas. “The friendly staff are only too happy to explain the subtle differences between the 17 varieties in stock. This is a good place to eat, too: try the pargit chicken skewers and the falafel.” 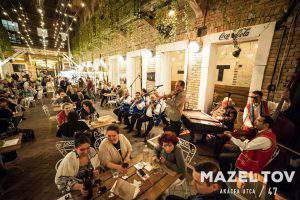 They recommend Csendes (Quiet) for intimate talks as it is a place for chatting, not dancing on the tables. “This District V bar reveals its quirkiness slowly: it’s only when you put down your coffee cup that you see the amputated mannequin limbs and leering Disney characters looking down at you from the rubbish (literally) mounted on the walls.” 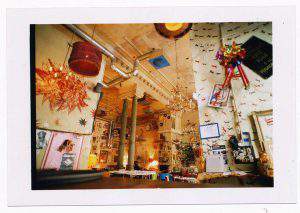 When it comes to Most (Now), they think that it is perfect for brunches as the atmosphere is also very familiar. “You’ll feel just as much at home reading the papers over coffee in the morning as you will sipping a Soproni beer after dark.” 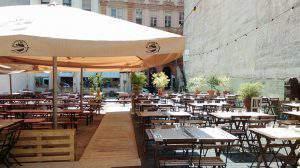 And lastly, Rácskert (Rail Garden) is unmissable for the festival-like atmosphere and the live folk music. “Graffiti adorns the walls (with a pair of creepy green eyes the main focus), candy-coloured strobe lights dangle overhead and there’s an array of blooming pot plants.”