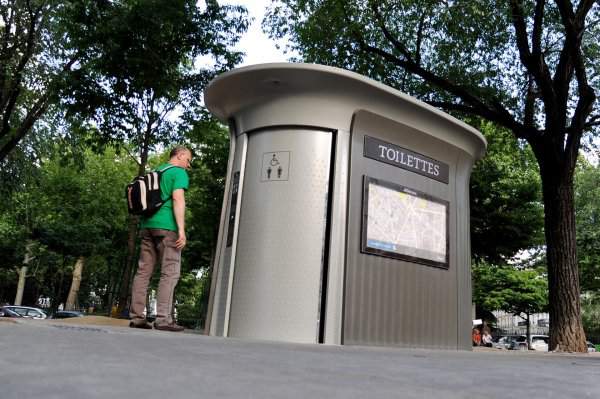 Altogether 30 modern, automatic toilets would be placed in Budapest, the selection of possible locations is in progress, according to the city council – reports hvg.hu.

JCDecaux public addvertising agency would raise the number of street toilets from the present 55 to 85, and it would not cost the capital a dime. Nevertheless, negotations take time, in certain areas they fear that homeless people would move into the toilets – Index.hu says.

The company would place altogether 30 modern, automatic toilets on the streets in exchange for public advertising space.

In reality, JCDecaux  would activate a 2006 contract, valid for 20 years, which was entered by VBM (City Furniture and Media) Ltd. and the city council. In the meantime, JCDecaux’s proprietor became the owner of VBM as well.

Szilárd Szelei, manager of City Furniture and Media Ltd. told us that they evaluated the public spaces in Budapest and they found 76-78 public toilets, but many of these did not even work.

Their automatic toilets are equipped with a timer, which opens the doors of the toilets after 15 minutes. Of course, this does not mean that the doors will open up wide, it will only unlock, making it impossible for one to lock themselves in for hours.

Besides, the toilets have a motion sensor as well, so if someone spends too much time inside, the maintenance workers will go to the location to see whether there is a problem – he explained.

Szilárd Szetei also told that the automatic toilets can be used free of charge in most European cities, so they would not ask for money in Budapest either, unless the capital decides otherwise. If the capital and the districts agree on the venues, then after a year’s time they could install the produced toilets. Before that, they need to consult with the public utility operators and set up a concrete base – he added.

The capital’s city council was asked why they are not availing this possibility, and they responded that they are consulting with the district councils about possible venues.