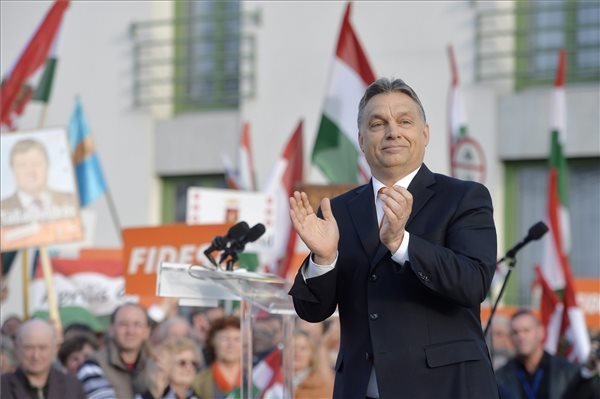 Budapest, April 2 (MTI) – Fidesz should do at least as well in the election as four years ago, Prime Minister Viktor Orban said at a campaign event in Mezokovesd, northern Hungary, on Wednesday.

He said the past four years has achieved cuts in household bills, and people for the first time started the year without news of price rises only. The governments of the previous eight years however raised prices of utilities fifteen times, Orban said. He added that tax benefits for families were very important as well as the introduction of extra benefits for young months. The current government had raised the value of pensions, too, he added.

The leftist opposition always cries foul at elections when Fidesz is winning and claims “the end of democracy”, Orban said. He also referred to “our young opponents on the right” who have never governed before, and said the message was that they should first prove themselves.

Orban said Hungary’s membership in the European Union — which some suggest the country should give up — is not a matter of a love affair but of well-considered interests.

“It is not worth it to be left out of handling affairs there, one must fight,” he said.