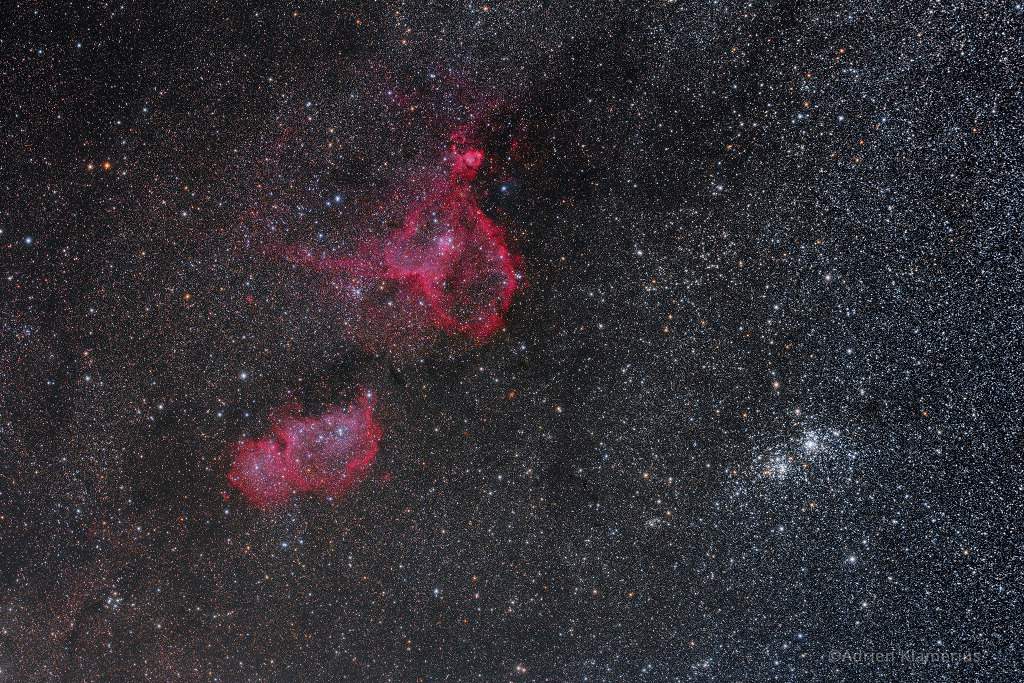 According to vs.hu, the American space research office (NASA) chooses an outstandingly interesting astronomic photo every day. This is the so-called APOD (Astronomy Picture of the Day) and Saturday’s winner photo was made by a Hungarian girl, Adrien Klamerius.

“They informed me Friday night that my photo Heart and Soul and Double Cluster would be published the next day and, needless to say, I was thrilled to hear the great news. Being part of NASA’s APOD selection at such a young age, and, as a woman, is a great honour” said Adrien.

It took her quite some time to perfect the photo. “I photographed these two object pairs for four nights in the end of August and the beginning of September with an altogether almost 15 hour exposure time. The location was one of the highest points of the Mátra Mountains and one of Hungary’s darkest spots, the Park of Stars in Zselic.”

This rich starfield spans almost 10 degrees across the sky toward the northern constellations Cassiopeia and Perseus. On the left, heart-shaped cosmic cloud IC 1805 and IC 1848 are popularly known as the Heart and Soul nebulae. Easy to spot on the right are star clusters NGC 869 and NGC 884 also known as h and Chi Perseii, or just the Double Cluster. Heart and Soul, with their own embedded clusters of young stars a million or so years old, are each over 200 light-years across and 6 to 7 thousand light-years away. In fact, they are part of a large, active star forming complex sprawling along the Perseus spiral arm of our Milky Way Galaxy. The Double Cluster is located at about the same distance as the Heart and Soul nebulae. Separated by only a few hundred light-years, h and Chi Perseii are physically close together, and both clusters are estimated to be about 13 million years old. Their proximity and similar stellar ages suggest both clusters are likely a product of the same star-forming region. Image Credit & Copyright: Adrien Klamerius

Anyone can send in astronomic photos to APOD, out of which the best ones are selected by the colleagues of NASA.

“I’ve always been stunned by astronomy, I’ve always loved reading about space. I got my first telescope six years ago, when I was also interested in traditional photography. In the end I joined my two hobbies and started astro-photography in 2013.”