Hungarians in western Ukraine’s Transcarpathia region will be represented by college teacher Andrea Bocskor (9th place), ethnic kin in northern Serbia by Andor Deli, member of the Alliance of Vojvodina Hungarians (10th place), while Laszlo Gubik, head of the youth chapter of the Party of Hungarian Community (21st place) will represent Hungarians in Slovakia if given a mandate, Ildiko Pelcz Gall, who heads Fidesz’s election list, told a press conference. 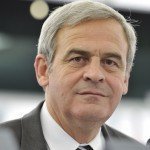 The ruling parties announced earlier that Hungarians in Romania will be represented by Laszlo Tokes, head of the Hungarian National Council of Transylvania, and Gyorgy Schopflin will be a representative of Hungarian communities elsewhere in the world.

All candidates of the party alliance will fight for Hungary’s interests and against “those that use the EP to undermine the reputation of Hungary or those that advocate quitting the EU”, Pelcz Gall said at the press conference.

“Our goal is to build a community in which independent, sovereign nations represent their own interests,” she added.