EP has found a way to sanction Hungary for the „homophobic law”?

After doing its legal research, the European Parliament has found a basis to justify the “rule of law mechanism” of the EU against the Hungarian government.

As Daily News Hungary reported, the Hungarian government decided to implement a new paedophile law to better protect children and their safety, while condemning those who try to take advantage of them. Unfortunately, in the process of the passing of the bill, the government had made some alterations to it. As a result, the law received some details that gravely involve and discriminate against LGBTQ communities.

Everything to know about Hungary’s “homophobic law”.

The decision caused a huge international backlash, numerous political leaders and politicians reacted to it. As Hungary is part of the European Union, the biggest reaction arrived from member states.

They condemn this new law by saying that it goes directly against all basic human rights that the EU stands for.

Harsh answer of America to the Hunagrian “homophobic law”

Since all member states are sovereign countries, no individual state has the right to intervene in another country’s internal affairs. Until a member state’s issues do not harm the common interest of the Union itself, they can not be involved. This is the reason why no legal step has been taken. Until now, maybe.

The rule of law mechanism of the EU was created exactly for these scenarios. It aims to protect the EU budget and the member states’ values. It gives a legal obligation to the European Commission to defend the financial interests of the European Union.

But what does an anti-LGBTQ law have to do with financial interests? Does not it only restrict the equality of human rights within the EU? That is where the European Parliament might have a solution.

According to the legal explanation of the EP,

the Hungarian government’s regular decisions against homosexuals might endanger the fair and right distribution of European financial aids and supports,

since spending these allocations might not comply with the expectations concerning LGBTQ people set up by the Union.

Based on this explanation, the rule of law mechanism could be implemented in the case of the paedophile law. If it happens,

it can easily leave Hungary without certain financial supports.

24.hu also highlights that the declaration justifying the European Parliament’s standpoint mentions Hungary’s application for an EU emergency aid of 7,2 billion euros, as well. Concerning this question, the European Commission does not want to accept the Hungarian government’s request, however, this has little to do with the “homophobic law”, but more with the fact that Hungary does not comply with two criterias.

in certain cases, the EP has the right to call upon all members states to sue a government,

when the European Commission does not do it on its own. This step will not be necessary, as it seems like the Commission takes the case seriously, which can very soon result in a procedure condemning Hungary’s violation of its commitment to the EU. It can even put an end to other EU procurements in the country. As The Guardian writes, EP representatives urge Ursula von der Leyen to suspend EU funds to Hungary to force Viktor Orbán to address concerns over politicised courts and corruption. Additionally,

the President of the Commission stated firmly that they will use all tools in their possession if the Hungarian law violating LGBTQ rights is not modified.

The European Parliament held a very long session today, discussing and disputing the situation in Hungary and the possible implementation of the rule of law mechanism. Some representatives gave a rather passionate speech about why certain steps are necessary to maintain equality and protect those who are now discriminated against by the Hungarian law.
EP representatives will vote tomorrow morning on the “Breaches of EU law and of the
rights of LGBTIQ citizens in Hungary as a result of the adopted legal changes in the Hungarian Parliament.”
The results will be announced at 13:00h. 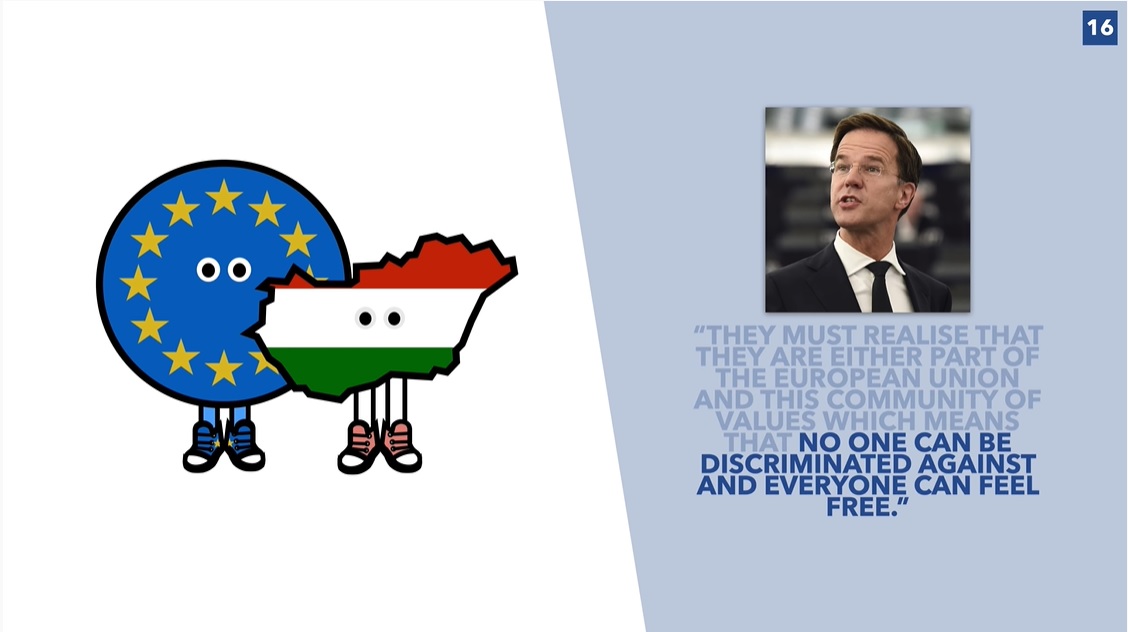 Read alsoCould the EU kick Hungary out over the new “homophobic” law? – Video