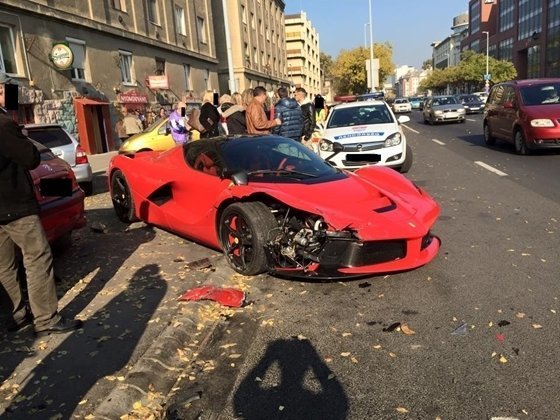 The right front of the supercar is crashed very badly. But what is this? A 963 horsepower hybrid Ferrari, the most special model of the brand, out of which there’s only 499 in the world.

According to hvg.hu, the LaFerrari came out of a workshop and crashed into three other cars on the corner of Váci Road and Fiastyúk Street. Nobody got injured in the accident except for the four cars. The police are still investigating the case.

It is not yet clear what happened exactly but a big piece spilt off from the car. The number plate was quickly taken off because a car like this is quite flashy, so we don’t even know the nationality of the driver. During the investigation, the owner covered the car with its sheet.

The LaFerrari (also known by its project name, F150) is a limited production hybrid sports car. Ferrari states that the car has a top speed exceeding 350 km/h, and that it is capable of reaching 100 km/h in under three seconds, 200 km/h in under seven seconds, and a speed of 300 km/h in 15 seconds.