Europa League: Vidi went down 0-2 to Belarusian side BATE

Europa League Group Stage begins with a defeat, MOL Vidi FC went down 0-2 to Belarusian side BATE on Thursday evening.

Vidi kicked off their second ever Europa League group stage at 18:55 pm yesterday. The setting for the Group L game was the Groupama Arena in Budapest with the opponents being BATE Borisov of Belarus.

BATE had traveled to Hungary without 37-year-old Aleksandr Hleb and international Nikolai Signevich. The duo remained behind due to injury. Vidi was missing keeper Ádám Kovácsik who had suffered an injury in the weekend league game and suspended Szabolcs Huszti. They also had to do without Danko Lazovic and Krisztián Géresi.

Marko Nikolic included new signing Georgi Milanov in his starting eleven. Fiola, Nikolov, and Tujvel also started the game following the weekend loss to Puskas Academy. BATE had Dmitri Baga and Nemanja Milunovic in their team and the pair had appeared in the 2015 Vidi-BATE game. Vidi also had Vinicius, Juhász, and Kovács in their team.

Match referee was Danish official Maks-Kristoffer Kristoffersen and he had featured twice in games involving Hungarian sides. The Skonto-DVSC (2-2) game in 2015 and the Vidi-Cukaricki match, which ended in a 2-0 victory.

There was a good crowd inside the Groupama with Marko Scepovic taking the kick off. It was Vidi that had the first chance of the game and it came after 5 minutes. Nego started the move, which ended in a shot from 22 meters by Kovács, which went wide. The first booking came after 13 minutes when Polyakov and Stopira ran for the ball by the side of the BATE box, but the referee pulled out the yellow and showed it at the Vidi full back. The home side won a couple of corners as the minutes went by but there was no sign of a breakthrough.

The match was fairly balanced and it was Ivanic who ran into a tight angle on 25 minutes, but Tujvel comfortably dealt with the effort. The keeper turned 35 years old a day earlier. BATE took the lead after 27 minutes. Finnish player Tuominen ran through and shot from a tight angle and the ball nestled in the bottom left corner (0-1).

The lead almost did not last too long as Nego ran down the right after 33 minutes, before doing well to find Kovács, who shot over from 16 meters. BATE’s Milunovic fouled fellow Serb Scepovic on 36 minutes, which resulted in a yellow card and a free kick to Vidi. Milanov sent the ball into the middle for Stopira to head over from close range. The chances came thick and fast: moments later and Milanov, Scepovic and Kovács fought to have chances, with the latter on the left trying his luck from 14 meters, but the danger was cleared.

The final moments of the first half saw a long-range strike dealt with by Tujvel. The sides went in at the break with the visitors leading by a single goal.

The sides came out for the second half without any changes to either team. There was another booking after 51 minutes when Filipovic slid in on Milanov, which the referee quickly dealt with. The resulting free kick did not prove dangerous. BATE came forward more and Ivanic powerfully sent his shot wide of the left post. 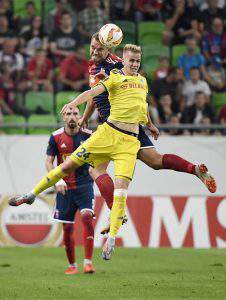 Manager Aleksey Baga brought off Tuominen after 61 minutes and forward Skavysh replaced him. There was a dangerous Filipenko chance following a cross by Stasevich, which Tujvel managed to save. Marko Nikolic made a change after 64 minutes when he took off Fiola and Nego went back to defence, while Armin Hodzic came on for his debut. BATE responded with Ivanic coming off and top goalscorer in Belarus for the last two seasons Gordejchuk came on.

A further substitute saw Berecz come on in place of Nikolov as the minutes ticked by and Vidi looked in search of a goal. The visitors were pressed back into the own half for long periods. A Berecz cross found Scepovic who managed to head towards goal, but keeper Scherbitski was equal to it. BATE went down the other end and made the game safe with a second goal. Filipenko headed home a free kick, which Tujvel had no chance to save (0-2).

There was a sending off in the final minute with Filipovic being shown a second yellow for his challenge on Kovács. The player headed into the dressing room with the full-time whistle blowing shortly after.

Vidi started their group stage matches with a defeat.

The other game in the group ended with Chelsea winning 1-0 in Greece against PAOK.