Budapest, October 27 (MTI) – The first commercial flight of the Dubai-based Emirates airline landed in the Liszt Ferenc International Airport in Budapest on Monday. 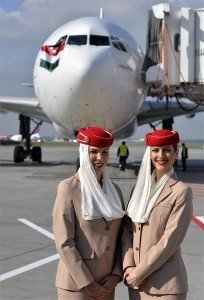 The airline will operate a daily scheduled flight between Budapest and Dubai from Tuesday with an Airbus A330-200 plane. The aircraft has capacity to carry 276 passengers and 12 tonnes of freight.

Thierry Antinori, commercial deputy CEO of Emirates, told the press at the airport that the airline will offer the fastest and most convenient service to passengers to reach their eastern destination which can also boost tourism. The capacity of the flights can be upgraded in the future, he added.

Csaba Balogh, deputy state secretary at the Ministry of Foreign Affairs and Trade, said that besides launching a regular flight, Emirates will also open a service centre in Hungary creating 300 new jobs.