Latin America has become one of the fastest developing regions in the world, with Peru producing an even higher rate of growth, Szijjártó told MTI over the phone. Both Peru and Hungary have a very open economy and pursue an economic policy aimed at free trade. Their economies are in a phase of change, with growing emphasis being laid on research and development, and the sectors with high value added.

“As both countries can significantly profit from developing political cooperation, we have decided to reopen the Hungarian embassy which had been closed in 2006,” the minister said.

It is in both countries’ interest to speed up progress towards free trade. A temporary free trade agreement has been in force between Peru and the European Union since 2013. Hungary ratified the agreement in the same year, Szijjártó said. “It is in our interest that every member country should do so as soon as possible, making it possible for the agreement to be fully implemented,” he added.

Szijjártó praised dynamic relations between Peruvian and Hungarian universities. He noted that

San Marcos University, the oldest university on the American continent, had signed cooperation agreements with the Pázmány Péter Catholic University in Budapest and Pécs University in southern Hungary.

The university of music and dance in Lima is currently in talks with Hungarian partners about cooperation, he added.

An agreement will be concluded in the near future to enable 20 students from Peru to study in Hungary on scholarship from next September.

Under another agreement signed on Wednesday,

“Hungary has high esteem in Peru” since it provided immediate help in the aftermath of the extreme weather conditions caused by El Nino. Hungary sent water treatment equipment at the time which created a demand for Hungarian water management technologies in Peru, Szijjártó said. 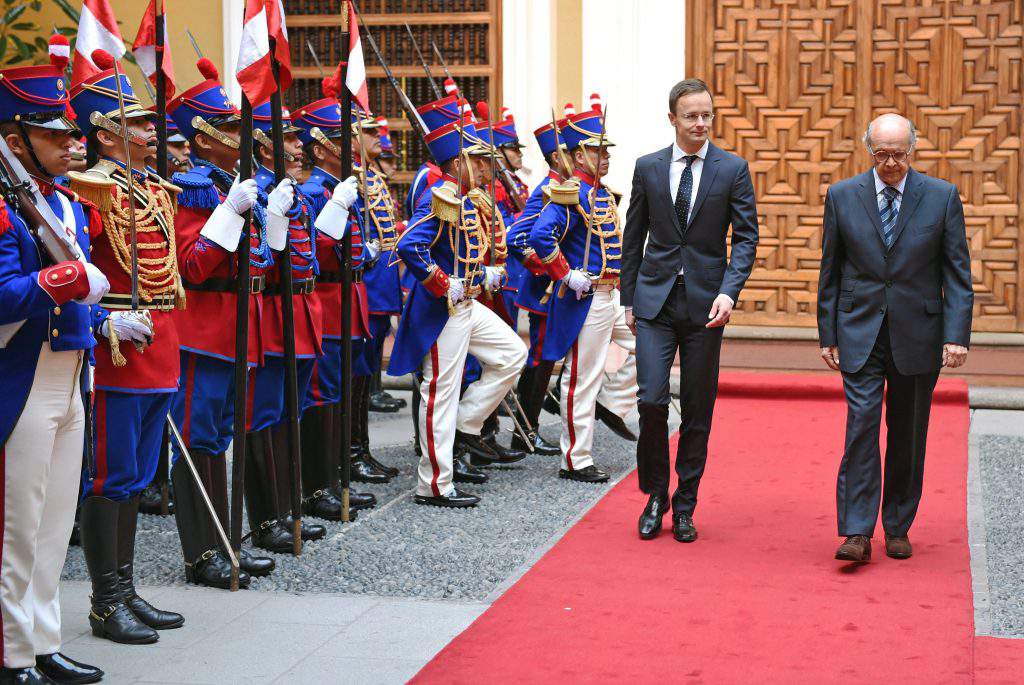 The two countries are cooperating in an extremely harmonic and effective way in international politics, with Hungary backing Peru’s admission to the OECD and the two countries supporting each other’s candidacy efforts in the UN. Both countries are dedicated to the fight against terrorism, Szijjártó said.

Szijjártó is to receive an honorary degree from San Marcos University and deliver a lecture on the challenges facing the EU and the cooperation between Latin America and the EU.

Hungary has reopened its embassy in Bogota, Foreign Minister Péter Szijjártó told MTI, adding that the goal is to make use of opportunities arising from Colombia’s development.

He said a new era is under way in Colombia thanks to the agreement between the government and guerilla groups after many years of warfare. Consequently, a period of peaceful development has begun in the country, releasing new energies, the minister added.

Szijjártó noted that one of the aims of the Hungarian government’s strategy in South America is to enable Hungarian companies to profit as much as possible from these benign developments.