Budapest, December 10 (MTI) – More than 9,000 billion forints (EUR 28.4bn) of European Union funding has been paid out in Hungary, government office chief Janos Lazar said about the 2007-2013 EU budget period on Thursday. The government will guarantee that farmers working at the state-owned Mezohegyes stud farm will have jobs to go back to once the farm reopens after it is auctioned off, the government office chief said. Lazar said the European Commission’s new infringement procedure against Hungary over its asylum law is an act of “revenge”.

More than HUF 9 tr paid out in EU monies

Tenders have already been invited for the 2014-2020 EU budget period amounting to 3 billion forints, he told a weekly government press briefing.

The government is involved in disputes with the European Commission in connection with several projects totalling 600 billion forints. Citing a case involving blocked road construction projects, Lazar said Hungary was ready to go to court and road construction companies may in the end be held liable. Commenting on halted construction of the M4 motorway, he said the competition office will have to clarify whether the suspicion of cartel can be proven.

He confirmed that an agreement has been reached in connection with the Norway Fund NGO case. The programme will be relaunched despite earlier disputes. A total of 37-40 billion forints will be available from the Norway Fund and the accounting period will be extended. The question of who should be in charge of distributing the funds in the 2014-2020 period is still under dispute and the Hungarian government insists on being in charge, Lazar said. 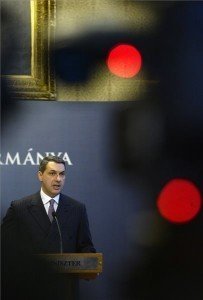 Janos Lazar told a regular government press briefing that Prime Minister Viktor Orban had sent him to Mezohegyes, in southeast Hungary, on Wednesday to assure the local workforce that the government would take responsibility for them. Lazar insisted that the government does not mean to destroy the stud farm and that it is prepared to discuss the nationalisation of the local milk farm.

The government also intends to compensate the town for any tax revenue losses, he said.

According to ruling Fidesz, the opposition protest served to “prevent Hungarian farmers from obtaining land”.

Lazar told a regular government press briefing on Thursday that the reason for the infringement procedure was that Hungary has lodged a legal appeal against the EU’s mandatory migrant quota scheme.