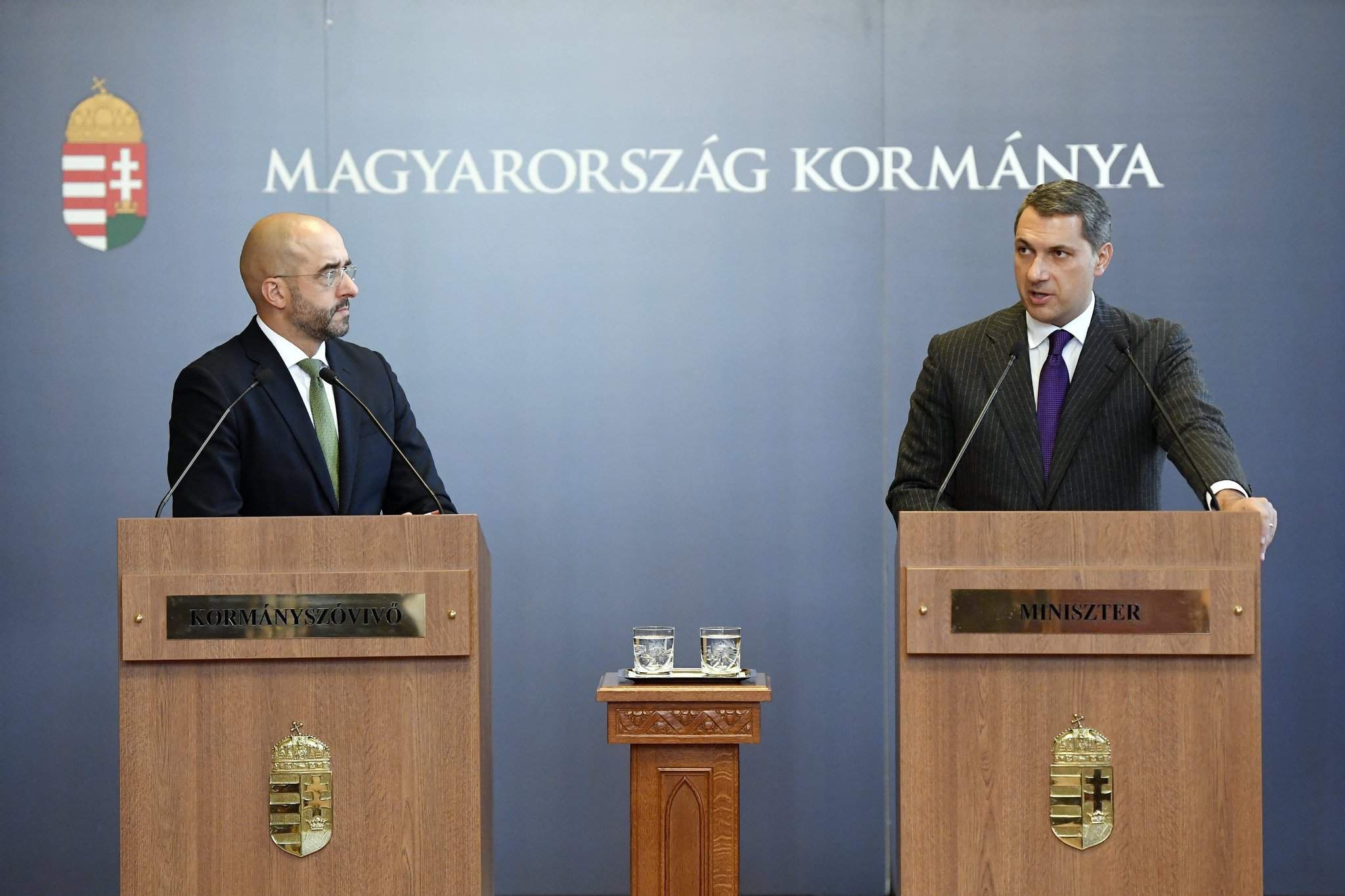 The government has decided to award 29.4 forints (EUR 96m) of supplementary funding to the interior ministry for the protection of the Serbia-Hungary border, the government office chief said on Thursday. The aim of the government is to convince Hungary’s parliamentary parties that the amendment of the constitution is “indispensable for protecting Hungary’s borders”, János Lázár said. There are no grounds to fear that the European Union will suspend payments to Hungary.

Lázár told a regular government news briefing that the handling of illegal migration on the southern border in the past year and a half had cost over 100 billion forints.

On other topics, Lázár said that at the initiative of Semmelweis University, which is Hungary’s primary medical training centre, a new medical centre for children would be established, among other health-related developments.

On the subject of public administration, Lázár said that in the next 3 years, 250 billion forints would be channelled towards revamping the civil service, and 45 related laws would be amended with the aim of reducing red tape.

Lázár said taking into consideration consultations that have already taken place, it was likely that the amendment proposal would have the parliamentary majority required for it to pass. He noted that parliament is scheduled to start debating the proposal next Monday and is expected to vote on it on either the first or the second week of November.

Socialist Party leader Gyula Molnár later said in a statement that he would not meet the prime minister. Molnar confirmed that Prime Minister Viktor Orbán had reached out to him to set up a meeting on the amendment proposal.

Molnár said he would be willing to meet Orbán if the prime minister wanted to discuss security policy matters concerning Hungary, the future of the EU or the “restoration” of the rule of law and the freedom of the press in Hungary.

On the topic of next week’s session of the European Council, Lázár said that the political goal of Hungary is to block binding migrant quotas, and that it is expected that the council’s members would confirm their standpoint that the quota can only be voluntary. He noted that on Thursday evening he is set to meet Austrian Chancellery Minister Thomas Drozda in Vienna in advance of the European Council session.

The Hungarian government supports Germany’s efforts to try to curb illegal migration into the EU through the migration deals the bloc has signed with Turkey and certain African countries, Lázár said. But Hungary also believes these agreements are no reason for the EU to give up on protecting its external borders, he added. Lázár also said he thought the EU had so far done “ridiculously little” to protect the external borders.

Lázár also commented on a recent editorial by The New York Times about Hungary’s migrant quota referendum, in which the paper’s editorial board said that “[Prime Minister Viktor] Orbán and other nationalists who are rejecting the liberal values of tolerance and free movement … risk stirring animosities that less than a century ago led the Continent into world war.” The government office chief said it was “obviously crazy” of the NYT “to imply that the Hungarian government is a Nazi government”.

Commenting on recent remarks by certain European politicians who have suggested that the EU should suspend funding for Hungary, Lázár said that the EU’s founding treaty did not allow any way for a member state to be stripped of its rights to cohesion funds. If cohesion funds were to be suspended, Hungary would have to protect its economy, he said. But Lázár insisted that fears of Hungary having its EU funds suspended were unfounded. He added, at the same time, that there was always a possibility that “political decisions” could be made against Hungary, but he insisted that such decisions would penalise the Hungarian people and not the government. Lázár said he would travel to Brussels next Wednesday to clear up the situation around EU funding for Hungary.

Lázár said Hungary was entitled to 8.9 trillion forints (EUR 29.1bn) in EU money in the current budgetary period, adding that tenders have already been called for 6.391 trillion forints, or 71 percent of the funds. The government aims to call tenders for the remaining funds before the year is out, he added.

Asked about the investigation into recent reports of organised criminals obtaining large quantities of SIM cards in Hungary which are believed to have ended up in the hands of terrorists, Lázár said the Constitutional Protection Office was in contact with telecommunications service providers and was examining whether the system of distributing SIMs needed to be changed. The matter will also be on the agenda in next Wednesday’s session of parliament’s national security committee, he added.

Lázár said he had offered to brief the national security committee about Hungarian-American financier George Soros’ influence in central Europe and the methods with which he said Soros attempts to “change” countries and influence policymakers.

János Lázár told a regular government news briefing that he would be travelling to Brussels next Wednesday to clarify the situation.

He said that Hungary had received 8,900 billion forints in the current EU financial period and that 65-70 percent of this funding had been put out to tender. He added that this year, the government’s intention was to tap the entire amount.

Hungary stands in first place among the Visegrad Group of countries when it comes to EU funding amounts, while it is in 6th place in the bloc as a whole, Lázár noted.

New Budapest hospital to be built near Kelenföld station

The government has decided that the capital city’s new south-Buda super-hospital should be built near Kelenföld railway station, the government office chief said. Lázár told that the new facility would have over 1,000 beds. The decision over its location took into consideration the proximity to the M1 and M7 motorways as well as the metro and bus junctions nearby.

The human resources ministry is assessing two plots and talks have already begun with the owners. An 8-10 hectare site will be needed and the building will have total floor space of 100,000 square metres. It will be the government’s most significant health development project in Budapest, Lázár said.

He also said that at the request of the prime minister, the human resources ministry will give junior doctors a fairer wage deal following September’s general pay rise.

Commenting on a new law amendment concerning tax secrecy, he said just as the optional recipient of 1 percent of each taxpayer’s personal income tax is kept a secret, which sport clubs get donations from the corporate tax of companies should also be a tax secret.

Meanwhile, Lázár said Hungary is ready to offer help to Ukraine to address the financing problems associated with mandatory vaccinations. Some residents in western Ukraine have not received the jabs.

In response to a question about the suspension of daily Népszabadság, he said the government had not discussed the issue, since neither the paper’s staff nor the publisher had asked the cabinet for its help. Commenting on speculation that the suspension was political rather than for financial reasons, he said questions should be directed to the publisher.

“We received two-thirds support in 2010 and in 2014 with Népszabadság exercising its blessed activities, so why would it be in our interest to stop them?”

The will of the government or the party is not decisive in this case; the fate of a paper depends on its subscribers and paying readers. If there is need for the spirit that Népszabadság represented, then it will continue, he said, adding that in any event its employees should be given fair treatment.

In response to a question about press reports claiming that central bank governor György Matolcsy lived in a residence owned by the head of the Hungarian Banking Association Mihály Patai, he said it would be wrong for the government to comment on issues concerning the central bank. He added, however, that the Banking Associaiton should be more careful.

In response to a question about the planned revamp of the third metro line, he said the government considered it a priority issue and the city council should decide whether it is necessary to revamp the carriages only or the stops as well.

“We will finance whatever the capital decides to do.” He voiced hope that Mayor István Tarlős would not draw the conclusion from disputes with various ministries that they wanted to hinder the project.