Guns replaced by tasers at the Hungarian police 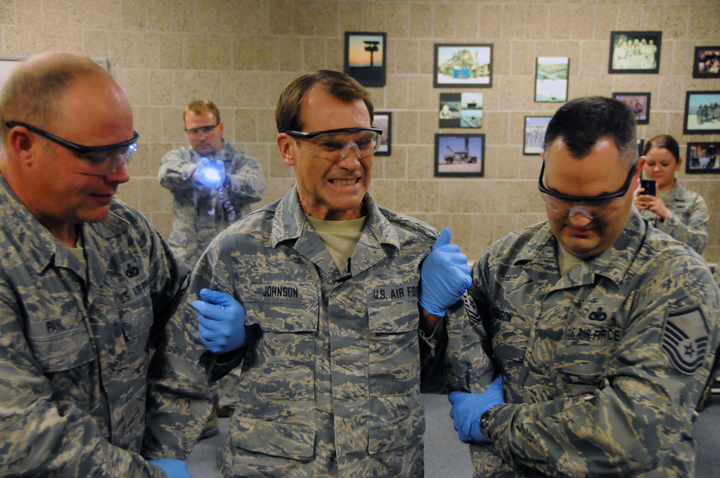 Master Sgt. Eric Johnson, of the 119th Wing public affairs office, center, reacts to the painful effects of a Taser electronic control device (ECD) shot into his back by Capt. Joseph Anderson, the 119th Security Forces commander, Oct. 17 as Master Sgt. Jarrod Pahl, left, and Master Sgt. Steven Gibson support him for safety reasons at the North Dakota Air National Guard, Fargo, N.D. The ECD training is an annual requirement for the Air National Guard security forces personnel. Johnson volunteered to experience the effects of the ECD during the training, and Anderson is a certified instructor who is also a city of Fargo police officer while in civilian status. (DoD photo by Senior Master Sgt. David H. Lipp) Photo: https://en.wikipedia.org/wiki/Taser#/media/File:North_Dakota_National_Guard.jpg

The American Taser X2 will be bought by the Hungarian police to replace guns. This change will be beneficial to police officers and will save lives in extreme law enforcement cases.

The Taser X2 has been continuously improved and developed since the ’70s by Axon with the aim of developing a weapon that can replace guns without fatal consequences. This is good news to police officers as the taser can be an effective tool in their work without causing permanent harm to people. General Tibor Lakatos told RTL that

the taser is going to be a tool in the police’s hands that they can use to protect themselves and the people who might be attacked.

Until now, the police could use batons, chemical tools, handcuffs, firearms, while special units, such as mounted police, could use swords, reports Magyar Nemzet. The taser will be added to the array of tools and will benefit the police in many ways.

Miklós Gáspár, master instructor at the University of Public Service, told RTL that the taser is the forcing device of the 21st century. The technique which is used is modern and has functions that make using a taser easier. Another advantage is that tasers have an identification number, and it is easy to locate where the weapon was used. This helps authorities prove the legitimate use of their new tool.

The taser cannot be abused, as it is a so-called smart device – its software logs all usage from the moment the device is secured.

In the first five months of last year, there were more than 70,000 cases where coercion had to be used during law enforcement proceedings. In the future, the police will be able to take action without endangering the criminal’s life by using a taser that has the same efficiency as a gun but without fatal consequences.