Turizmus Online reports that the restaurant of Jenő Rácz, a Hungarian chef, was awarded a Michelin star in Shanghai recently. They have conducted an interview with him asking about his exciting plans for the future and about how he got his Michelin star?

The question wasn’t if they would get another visit, but rather ‘who?’, ‘when?’ and ‘how?’.

As it usually happens, the inspection’s big day coincided with one of the busiest and most chaotic ones for the restaurant.

The following is an interview conducted by Turizmus Online with Jenő Rácz, the Hungarian chef of the innovative fine dining restaurant.

For gaining another Michelin star? Yes, when the elegant invitation arrived, inviting us to the Chinese Michelin gala. We got invited to the illustrious event taking place on the 20th of September and we could barely keep it under wraps with Stefan Stiller. He is the owner of the restaurant and my chef companion, because we are the ones in charge of the food creations in the kitchen. 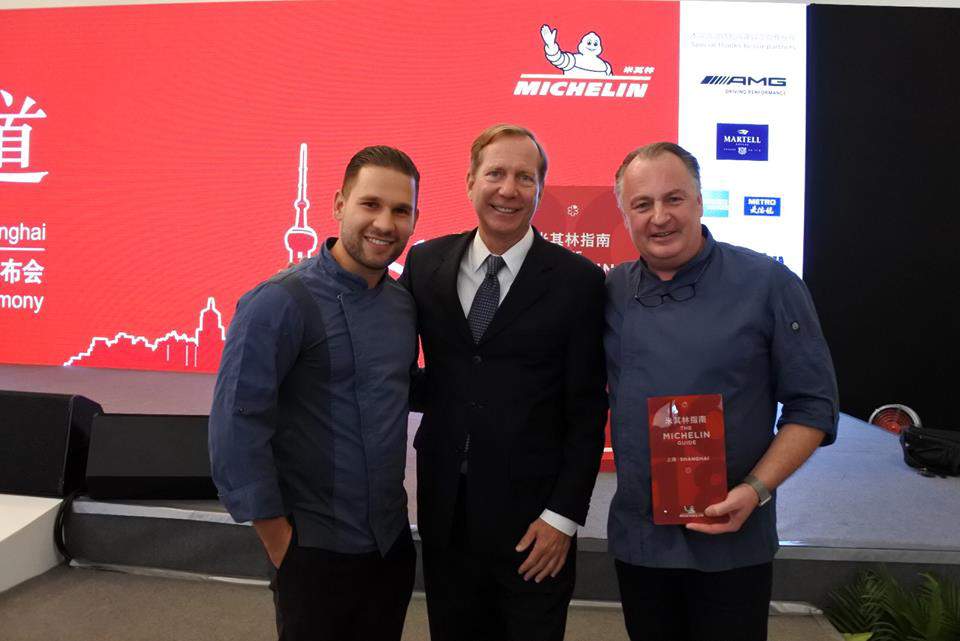 Absolutely. At least up to the moment when they reveal who they are upon finishing their meals, and having paid for it.

Then they give you a name card, where it says that they are from Michelin,

with an e-mail address included. Then they wait for the guest area to clear out and they take a look at the kitchen.

What did they have this year?

What most of the other guests did: we served them the current 14-course menu.

You have so much experience, you must have expected them to come around this year as well. Did you have any clues that it would be them?

The day they came there was total chaos. The guest area operated on full personnel with 28 employees. We had a full house that day and a lot of work in the kitchen. Since the kitchen is open to the guest area, after we’re done with the dressings, rules say that we, ourselves, have to serve the guests their meals and tell them exactly what they are going to have. We were in a rush that evening, coming and going, coming and going… The next day we re-watched the previous day’s footage to see how much they had to wait for each course, how much attention we’ve paid to them. We could sigh with relief only after doing this, when we were reassured that despite the full house, everything went well with their table, too.

The French Michelin inspectors, I suppose, weren’t Chinese. How many foreign, Chinese or other Asian guests do you have? In what percentage do Europeans come by?

70-75 per cent of our guests are from various Asian regions, primarily from China. 20-25 per cent of the clientele is from abroad, on many occasions European. You should imagine it like this: the guest area is full, there are about 30 guests seated, 4-6 out of them are not from Asian countries.

Do you have Hungarian guests?

The Hungarian consul likes to take his diplomat guests to us, so that they can all take a special flavour tour.

How long does it take to have a meal at the Tai-an Table?

We’re a fine dining restaurant, not a fast food restaurant. It takes at least two hours to serve a complete meal course properly. It takes time to create an intimate, homely atmosphere. We also have to follow the protocol strictly and pay equal and proper attention to everyone. The menu changes on a monthly basis. We serve the same meals to everyone during one night – it would be impossible to do otherwise.

How much does a fine dining, two-Michelin star dinner cost?

You went to China from Hungary, having Hungarian roots. Do you have any meals representing the Hungarian cuisine?

So far there are none. We don’t necessarily cook only Chinese meals, but our infusion cuisine is based on Asian recipes, using Chinese ingredients. We use our own experiences with Stefan when creating these meals.

But I am considering putting a true Hungarian meal on the menu: I want to make székelykáposzta*,

keeping the original flavours, but redesigning it. I want to put crunchy sour cream crisps on top of it, but maybe I’ll go with sour cream powder.

Do you have sour cream?

Of course. It is used in the French cuisine and we have some French meals.

You received the latest Michelin star on the 20th of September – there must be rush hour ever since.

This is always the case when a restaurant gets such a prestigious award. The guests looking for a gastronomic holiday start flooding us, so yes, we have full house every day. Sometimes, we have double seatings, 32-33 people dining in one night. But with time, this frenzy will settle and we’ll be back on track, keeping seasonality in mind. The new Chinese Year is close – this is when people go on holiday in China – and in this season most of the restaurants, even the fast food chains, close up.

And the ever-important question: who do you think receives the Michelin star? The chef or the restaurant?

People keep asking me this. Obviously, the restaurant gets the Michelin, but the recognition goes to the chef.

*pork and sour cream stew with onions and cabbages