The MLSZ’s press release said, Debrecen suffered a nightmare first half at home to Honvéd as they went 3-0 down inside the first 38 minutes courtesy of two goals from Márton Eppel and another from Patrick Hidi. 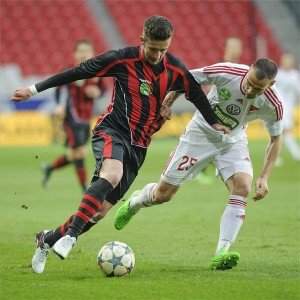 Eppel converted his first in just the fourth minute when he headed the ball into the left side of the goal following a right-wing free-kick. Despite Debrecen’s attacking game, they couldn’t fashion any chances and instead it was Honvéd who scored again in the 26th minute from a corner which the home side had many chances to clear but failed to do, Eppel instead knocking in a rebound after Gergő Nagy’s shot was blocked. Hidi then arrived in the box to slam a left-wing cross into the right side of the goal in the 38th minute to finish the scoring and inflict Debrecen’s home loss of the year upon them.

MTK Budapest took full advantage of Debrecen’s slip-up to leapfrog them into second place in NBI after they beat Haladás 3-1 at their temporary home of Dunaújváros despite falling behind to a 12th minute Roland Ugrai goal, his 11-metre shot finding its way into the net after he’d attempted a number of tricks. MTK equalised soon after though, Thiam’s shot from the edge of the penalty area ending up in the right corner of the net. Ádám Hrepka missed a great chance to hand the home team a deserved lead in the 38th minute but Marek Strestik spared his teammate’s blushes on the hour mark when he arrived to slide Barnabás Bese’s cutback into the net from close range.

Thiam hit the woodwork moments later but Strestik’s second from the penalty spot after Dániel Gera had been fouled wrapped up the game for the capital-city club in the 77th minute. MTK are the only club in NBI with an unbeaten record this springtime and Marek Strestik is one of only three players to have scored three goals so far this year, Debrecen’s Zsolt Horváth and FTC’s Dániel Böde being the others.

Böde it was who struck a brace of goals for Ferencváros in their 4-0 home demolition of Puskás Akadémia, all the damage coming in the last 22 minutes after some spirited resistance from Robert Jarni’s team. Having said that, a needless foul in the box gave Roland Lamah the chance to stroke home Fradi’s first from the penalty spot before Böde scored his first with a header from eight metres moments later. Six minutes from time, András Radó pounced on a loose pass by Attila Fiola inside the area, turned towards goal and was fouled by Ádám Lipcsei, Böde this time stepping up to send the spotkick into the left side of the goal. Radó scored the goal of the game in the last minute of normal time when he surged from the left corner of the area to a more central position and curled the ball into the far top right corner of the net.

While Fradi now go 22 points clear at the top, Puskás Akadémia are still only one point clear of the relegation zone after Vasas lost again, this time away at Paks. The team from Angyalföld had their chances in the first half-hour but spurned them and that allowed Lajos Bertus to give Paks the lead in the 33rd minute courtesy of a 20-metre drive which took a huge deflection of a defender to wrongfoot Gergely Nagy in goal. Vasas have still to score a goal from open play in the spring and their attacks were broke down all too frequently in the second half, for which they were duly punished again when János Hahn converted Zsolt Balázs’s cross from six metres out to secure a 2-0 victory for Aurél Csertői’s team.

Vasas, in turn, will be more than a little worried about basement team Békéscsaba who are inching closer to them at the bottom. Vasas have 21 points but Zoran Spisljak’s team are now just three behind after an impressive 1-1 draw away at Videoton. Zsolt Laczkó’s header gave the visitors an early lead and Paukner could have doubled the lead in the 56th minute but his shot from close range was saved by a sprawling Ádám Kovácsik in the Vidi goal and just a minute later the hosts equalised, Stopira receiving the ball from Máté Pátkai on the edge of the area before turning and sliding the ball inside Vukasin Poleksic’s near right post. Slavko Damjanovic was sent off for a stubborn Békéscsaba in the 95th minute but they still held out for what could turn out to be a vital point in their fight for survival.

The final match of the weekend was at the Megyeri úti stadion where Újpest and Diosgyőr battled attritionally in the first half before the home team asserted their authority, only being denied a goal on several occasions by the outstanding Ivan Rados in the DVTK goal. It would be the lilac and whites though who would snatch the three points in added time when substitute Nemanja Andric rose highest to head a cross firmly into the right corner of the net. Diosgyőr are now in ninth place on 27 points having won only six of those on the road this season, while Újpest rise to third spot – level on points with 2nd-placed MTK.

Next weekend sees Újpest travel to Békéscsaba while Vasas host a Budapest derby against leaders Ferencváros. MTK entertain Debrecen while Videoton make the short journey to Felcsút to face Puskás Akadémia and Paks head to the Bozsik Stadion to take on Honvéd. Haladás, meanwhile, will play Diósgyőr in Miskolc.