Hungarian university students did the hat trick that no other students did: medical students won the InSimu prize at Microsoft’s innovation world competition following last year’s touristic game success with Mistory (the same idea as Pokemon Go but it was launched one year earlier) and the fitness tamagotchi Tep’s success two years ago. Index.hu writes that the team from Debrecen finished in the third place in the World Citizenship category which comes with a prize of 5 thousand dollars and invaluable relationship capital.

“This year the competing teams are much more professional and grown-up than they were 2-3 years ago” said organiser in chief Victoria Grady answering the question about this year’s field of the Imagine Cup. Two years ago the most popular teams brought a nail polish mixing robot and an online controlled teddy bear to the competition, while this year’s stars were the smart prosthetic limb, the skin cancer detector app and the VR application that helps the rehabilitation of stroke sufferers. And of course, the Hungarian invention, the InSimu, which stood out in the Hungarian qualifications and went to Seattle as a potential winner. Just like 30 other teams of the total 35. By the way, the 36 teams represented 35 countries and you wouldn’t guess who doubled: Tunisia.

InSimu trains real doctors with the help of virtual reality on tablets and its basic idea is absolutely realistic as it was born from a serious problem. Think about doctors fresh out of universities in all medical television series and the way they realise that they decide over lives. This causes drama, guilt, conflicts and deaths in the television.

InSimu that started from Debrecen (there are two medical graduates, a programmer and a marketing specialist in the team) thought that first three were more than enough out of the causes mentioned above. The basic idea of the app sounds simple: it generates a virtual disease based on the case histories of real, documented patients, who you can send to examinations, and then you have to come up with a diagnosis. It’s not enough if the diagnosis is right, you also have to choose examinations which take up the least amount of time and money and don’t expose the patient to unnecessary interventions. This sounds like a winner idea in Seattle, the home of Grey’s Anatomy, one of the most popular hospital series.

The team was the last to present their work to the jury, who had been listening to other teams for 10 hours then. There was everything: a smart bracelet that helps children with asthma, an app that adapts Braille to the vibrating function of touchscreens, a photo app that identifies signs of skin cancer, a smart sensor for the blind that identifies the things in their vicinity (including people and signs). 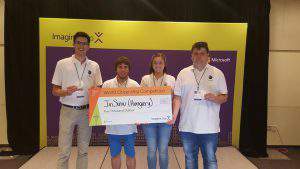 “All make the world a better place” said Satya Nadella, the managing director of Microsoft. There is something soothing about listening to 19-20-year-olds solving the smaller or bigger problems of the world with such naturalism and enthusiasm. And the best part is that the organiser Microsoft, who’s been spending quite some money on the event for years, doesn’t snatch the most talented competitors away and doesn’t buy up their projects.

The category was won by a Greek team, who dealt with the problem of bullying. You wouldn’t even guess how serious this problem is: according to statistics, the phenomenon leads to the suicide of thousands of teenagers every year, not to mention how though it can get in the world of social media. The Greek team’s project called Amanda helps in recognizing the victims of bullying with VR solutions and encourages the passive bystanders to interfere.

This was the World Citizenship category. The category of innovations was won by a portable widget that examines sense of balance and scoliosis, while the category of games was won by a slinking-logical adventure game based on time manipulation. It’s interesting that the majority of participants in this category also want to attract attention to a certain social or environmental problem.

And there came the audience’s favourite (but didn’t win a prize in the end), the Apollo-X, which was developed by the team of Bahrein. It is basically a semi-VR and semi-smart phone sci-fi horror, which watches the pulse of the player and sends the more frightening things at you as your heart beats faster and faster. So if you can stay calm in reality, then you can survive in the game.

A HUNGARIAN PHYSICIST WINS THE WORLD COMPETITION OF DECODERS

Virtual and embedded reality was the hit of this year’s competition, every second team was interested in it. Besides Oculus, Hololens was the main platform as we are talking about Microsoft after all. The other trend was cloud solutions (mainly Microsoft Azure) which came up in 9 teams out of 10. However, the number of teams occupied with hardware was higher compared to previous years.

But what’s most interesting is that the 3 categories were won by Greeks, Romanians and Thais, and the medallists included Tunisia, Sri Lanka and Hungary. The Americans, British, Japanese and Germans, who are proud to have the best universities in the world, were all defeated. In conclusion, if you have a great idea and enough persistence to carry it out, then you don’t have to come from a rich country with a super university background, you can be successful in wind-bound with your own will-power. This is the message of Imagine Cup.