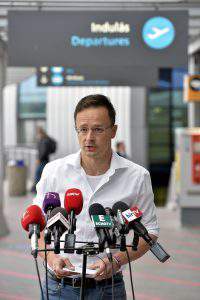 Based on the actions that took place overnight, the manner in which they were committed and the number of victims, “this can be called an act of terrorism”, Péter Szijjártó said at a press conference at Budapest’s Liszt Ferenc International Airport.

At this time, there is no information regarding any Hungarian nationals killed or injured in the attempted putsch, he added.

Turkey is Hungary’s friend and a strategic ally, Szijjártó said. Hungary stands in solidarity with the democratically elected government in Turkey and with the Turkish president, too, he added.

Szijjártó said he had spoken with his Turkish counterpart, Mevlut Cavusoglu, on the telephone in the morning and was told that the Turkish government and central powers have taken back control and are “in charge of the situation”. A well-organised, but also insulated, part of the army carried out the attempted coup and tried to take over power, Cavusoglu told Szijjártó.

Szijjártó, who was returning from the Asia-Europe Meeting (ASEM) in Ulaanbaatar, said there were shots fired in the street next to the Hungarian embassy in Ankara, but they were not directed at the embassy building or its staff.

Nándor Gúr, the deputy leader of the opposition Socialists, said at a press conference on another matter on Saturday that the attempted coup in Turkey “was wrong”.

“We must take care that a similar situation in which the people put a standing government in such a position that elicits such consequences never happens in Hungary,” he said. Such situations can be avoided if a government serves the good of the people, he added.

Hungary’s defence ministry said the tour of mission of Hungarian soldiers serving in EUFOR’s Bosnia contingent had been extended because of the coup attempt. The soldiers’ six-month tour would have wound up in the evening, but they will now remain until the situation in Turkey is resolved. The soldiers have been on standby since Friday evening, the ministry said.

About 150 Hungarian soldiers are stationed in Sarajevo as part of the EUFOR peacekeeping mission.