Hungary’s biggest church has been ordained 160 years ago

According to origo.hu, Hungary’s biggest church, the Esztergom Basilica has been ordained 160 years ago. The Assumption and Saint Adalbert Basilica is the main church of the Hungarian Catholic Church.

A church has been standing on top of the Esztergom Castle Hill above Danube since the 10th century. The first was built by Monarch Géza in honour of Saint Stephen, the first martyr. Legend has it that Géza’s son, King Saint Stephen was born there under the name ‘Vajk’.

The Esztergom archdiocese was founded by Stephen in 1001 and the Saint Adalbert Basilica was already standing in the place of today’s basilica in 1010. Unfortunately it got burnt down in 1180, but King Béla III restored it with the help of Archbishop Jób. That was when the side-chapels were attached to the church.

The basilica got very damaged during the 1543 Ottoman siege and it even got occupied by the Turks after the fall of Esztergom. They turned it into a large mosque and kept gunpowder inside. Hungarians tried to recapture the castle in 1594, but they didn’t succeed, in fact, all of the gunpowder exploded and the only thing that survived was Archbishop Tamás Bakócz’s red marble Annuntiatio-chapel.

Origo.hu writes that later it was Maria Theresa who built a baroque church in the middle of the castle in honour of Saint Stephen. The ruins of the original basilica were cleared off for good during the archdiocese of Ferenc Barkóczy and Sándor Rudnay so that the construction of a deserving basilica could start.

Sándor Rudnay desired a huge church. The works were started in 1820 by Pál Kühnel who envisioned a huge building complex, a real Hungarian Vatican on the Castle Hill, with palace-wings, an archiepiscopal palace, seminar and canonical houses. The Vienna court wasn’t impressed by the plans as they didn’t fancy the idea of having the greatest church of the Habsburg Empire in Esztergom. So the grandiose plan was reduced to the basilica and the canonical houses.

The foundation stone was lied on the 23rd of April, 1822 at Saint Adalbert’s celebration. The construction was led by Kühnel’s nephew, János Packh with a few changes. The main walls, the pillars holding the cupola and the vaultings among the pillars were already standing when Archbishop Rudnay died in 1831 and the construction work stopped. 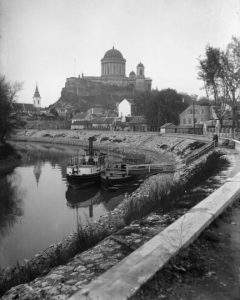 The construction continued in 1839 with the commission of József Kopácsy as archbishop. However, János Packh was murdered in the same year so the archbishop asked József Hild, the designer of the Eger Basilica, to continue the works. Hild increased the monumental feeling of the building by using ironwork and raising the cupola, which was a very modern touch in that time. Even though Archbishop Kopácsy died in 1847, Hild had so much influence that he could go on with the works in the following years.

The basilica was finally ordained on the 31st of August, 1856 by the new prince-primate, János Scitovszky in the presence of Franz Joseph. At the inauguration ceremony Ferenc Liszt’s Esztergom Mass was performed on a three manual, 49 register organ built by Master Ludwig Mooser. Liszt himself was present at the ceremony to conduct the Mass. 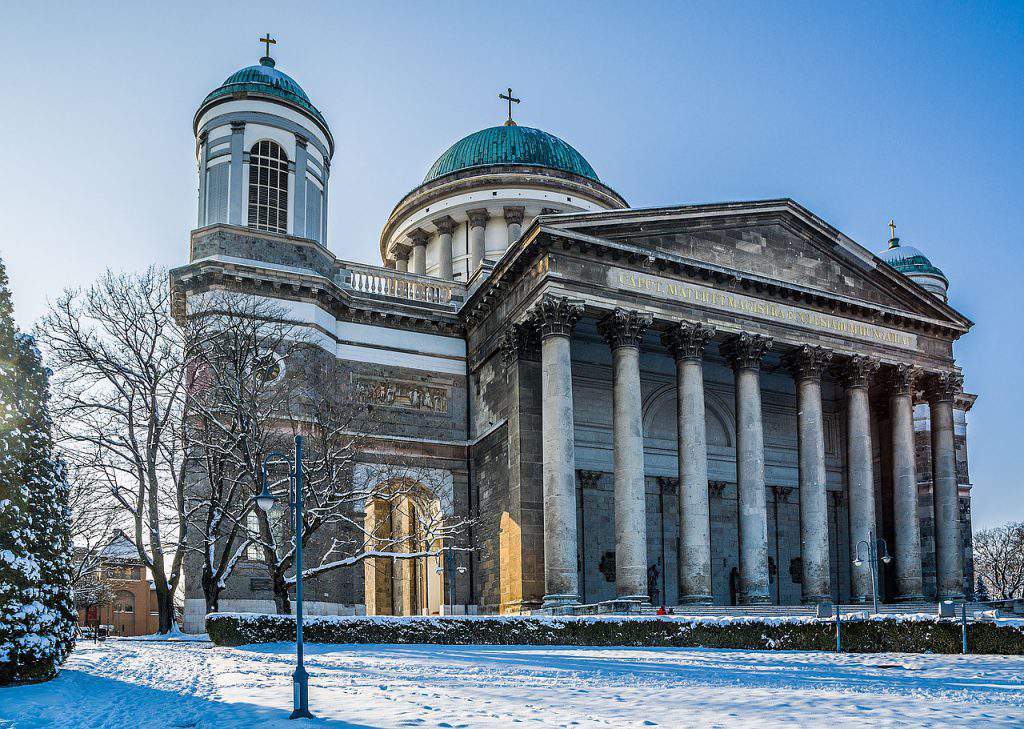 The construction was eventually finished under the command of architect József Lippert and the top-stone was placed on the 1st of November, 1869. The neo-renaissance arrangements of the interior went on for further decades. The total cost exceeded six million koronas (currency of Hungary from 1892 until 1926).

Despite it being the work of several architects, the Esztergom basilica is still a harmonic building, one of the peaks of Hungarian classicism. Its back on the Danube, standing at a height of 50 metres, the basilica simply rules the neighbourhood. Its ground-space is 5660 m2, it is 118 metres long and 49 metres wide, and its outer height from the crypt to the top of the cupola is 100 metres.

Two 57 metre tall bell-towers are rising on the two sides of the basilica, which’s three enormous bells can be found in the southern tower. The street front is dominated by eight plain, 22 metre columns with Corinthian capitals that are in a dramatic contrast with the unornamented mass of the building. The semi-globe shaped cupola is supported by 17 metre thick walls, 24 Corinthian columns and is lightened up by 12 windows.

The statues of the high altar were made by the workshop of Pietro Bonani, while the gilded bronze decorations were made by Franz Anton Danninger’s workshop. The high altar-piece is The assumption of Mary, the work of Michelangelo Grigoletti on the track of Titian. It is the world’s biggest altar-piece painted on a single canvas.

The basilica’s treasury is the richest ecclesiastic collection of Hungary. In its Egyptian-style crypt you can find the mausoleum of archbishops buried since the 19th century. This is where Prince-Primate József Mindszenty’s ashes remain as well. The roofing of the basilica burned down in 1993, the renovation cost 94 million forints. In 1998, masters from Passau renovated the three bells of the basilica, which got floodlights in 2005. 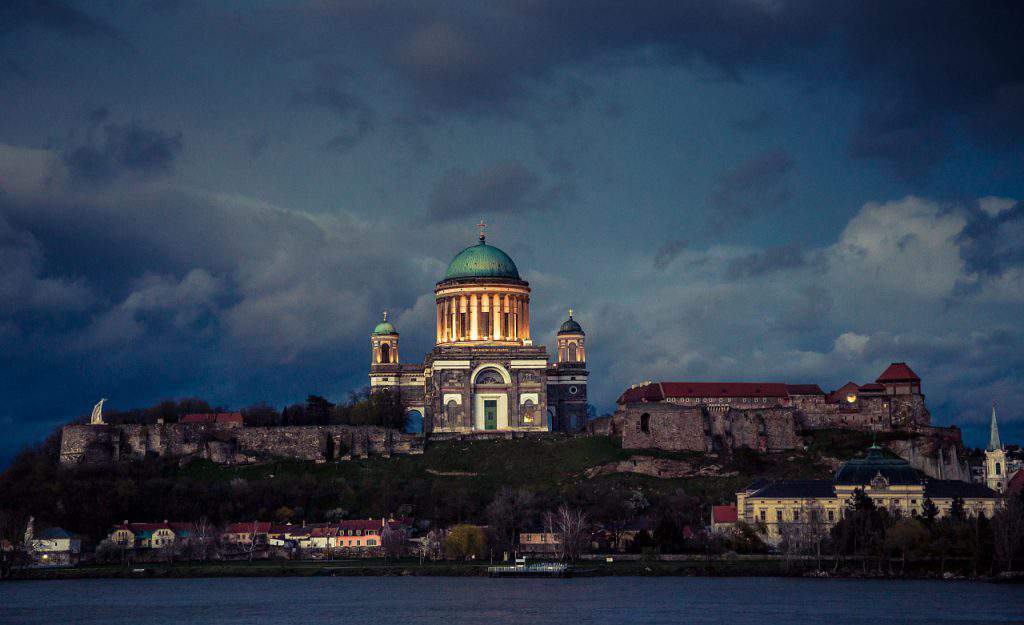