The Hungarian economy is growing, and it is doing it quite nicely, but the benefits this bestows upon its citizens are becoming less and less evenly distributed in Hungarian society. Although the growth of the economy is needed, unfortunately, this growth model cannot be sustained for long. Meanwhile, the level of corruption has hardly been improving either. This is approximately how the European Commission’s latest country report about Hungary could be summarised, according to Index.

According to the European Commission, although the Hungarian government has accepted and implemented some of the recommendations from the 2019 country report – such as that

wages in the healthcare sector have increased, and Hungary has also spent more on research and development

– there are areas where there is no noticeable progress at all. This is especially true for filtering out corruption or guaranteeing judicial impartialness.

The economy is buzzing, but for how long?

The country report starts by acknowledging that the Hungarian economy has outperformed the EU average since the last country report.

The average Hungarian economic growth rate has been above 4% since 2014, and the overall slowing of the global economy due to the US-China trade war and some other uncertainties had no noticeable effect on Hungarian economy either.

The commission also recognised that Hungarian incomes have increased recently, the living conditions have improved, and poverty has decreased.

We wrote about the European Commission’s roadmap for EU members to combat climate change. It is worth keeping an eye open, as it was promised to be proposed this March. In January 2020, the European Commission officially registered the signatures for the Minority Safepack initiative. You can read about it here.

But the commission is concerned about how long this growth will last. According to the report, it will not last for long; the Hungarian growth model was mainly based on attracting more workers into production, while production did not become much more efficient and the output of the economy only grew modestly. Besides, because there will soon be full employment in the country, it will be harder to increase the number of workers.

Further complications come from inflation and the increase in production costs, causing the competitiveness of Hungarian exporters to decline. The government’s economic and tax policy is very pro-cyclical. This means that the government is supporting the economy when it is going well anyway, which means that

when Hungary does feel the global economic slowdown, the government will not be able to vitalise the economy.

GDP is on the rise, as is inequality

The commission explains in great detail that Hungarian society is in many ways quite unequal and has become even more so in the last decade. Although these inequalities within Hungarian society are not as high as in the EU on average, if there will be no change, then Hungary will soon catch up with the West.

However, figures of the commission show that over the past decade, that the better income one had, the more their disposable income would grow. 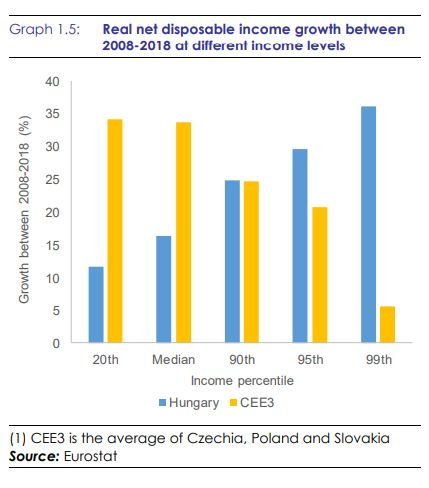 The figure shows that the wealthiest 1% of Hungarians had the highest income growth in the past decade, nearly 35%, while the income of the poorest only grew 10%. In the shorter term, the same trend is evident; between 2014 and 2017, the wealthiest 20% of households increased their financial wealth by 36%, while the most deficient 80% could only increase that by 8%.

It is interesting that in other Visegrád countries the trend is entirely the opposite, where the share of the poorest has increased the most, and the percentage of the wealthiest has increased the least. In the meantime, the Czech, Slovak and Polish median incomes increased almost twice as much as the Hungarian.

The reason why these statistics are so ‘distorted’ is likely because of the tax system and state subsidies. These are more supportive of the wealthier middle and upper classes than the needy and poor. Another statistic of the report shows that in no other country has the tax system increased inequalities to the same extent as it did in Hungary. 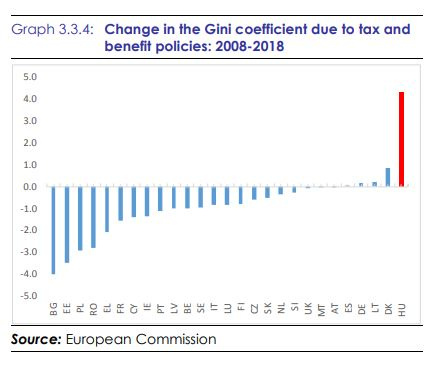 The figure shows the contribution of taxes and government subsidies to the so-called Gini coefficient, an income inequality measure. This coefficient is a value between 0 and 1, everyone in a country with a factor of 0 has a completely equal income situation, and a factor of 1 is extremely unequal.

As you can see, in most member states of the European Union, tax systems tend to reduce inequalities more, such as in Bulgaria, Estonia and Romania for example. Apart from Hungary, there are only three other countries where the coefficient rose, but only to a negligible extent.

‘Who is the most corrupt one of all?’

For years, the European Commission has included in every country report about Hungary that a major problem in Hungary is the high level of corruption risk, high perceived corruption, unpredictable political decision-making, and the dependence and goodwill of the government on which companies will succeed and which will not. 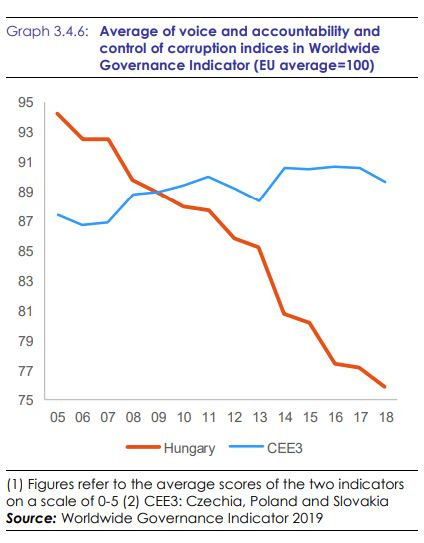 This has not changed since, and if you can believe the statistics of the report, it became even worse. According to the graph, although the Czech Republic, Poland and Slovakia rank lower in corruption and accountability indices than the EU average, they show a slowly improving trend, while

Hungary has been performing worse and worse in corruption statistics since 2005.

It is not only the perception of corruption that is concerning but also the reactions of the government. Another graph shows that OLAF has identified more problems in Hungarian tenders than the EU average, but the Hungarian government found fewer issues than the authorities of other member states. 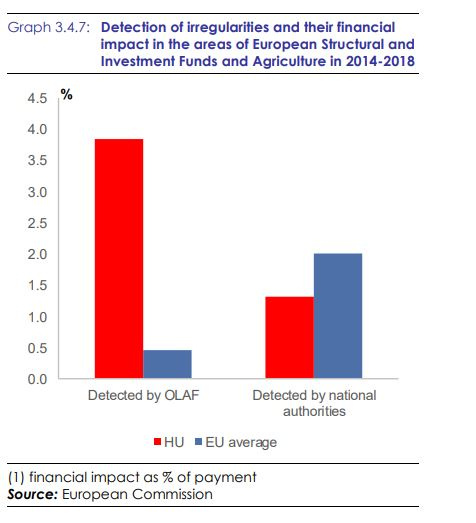 Between 2014 and 2018, the European Union Anti-Fraud Office launched investigations where it recommended regulatory action in only one other country apart from Hungary. OLAF advised the authorities to look into the matter in 45% of the Hungarian cases, while the EU average is 36%.